Beverly will be suspended for one game without pay during the first game he is eligible to play for the 2021-22 season, the NBA announced. 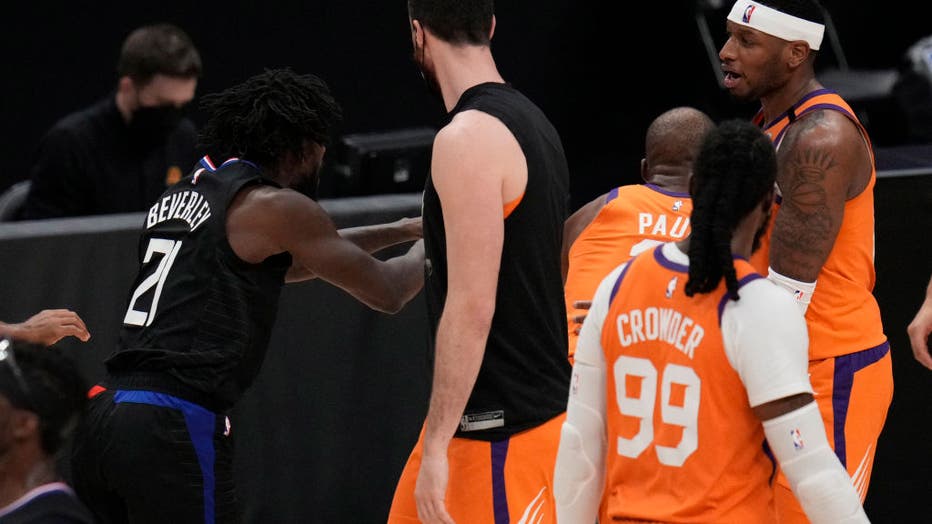 Los Angeles, CA - June 30: Patrick Beverley #21 of the LA Clippers is ejected from the game after shoving Chris Paul #3 of the Phoenix Suns in the fourth quarter of game six of a Western Conference finals NBA playoff basketball game at the Staples Ce (Getty Images)

Kiki VanDeWeghe, the NBA’s executive vice president of basketball operations, ruled that Beverley committed an unsportsmanlike act when he came up behind Paul and forcefully shoved him as the teams went to their benches for a timeout with 5:49 remaining in the fourth quarter of the game Wednesday. Beverley drew a technical foul and was ejected.

Beverly who is known for his scrappy and aggressive play did incredible defensive work in the playoffs against Utah’s Donovan Mitchell and Phoenix’s Devin Booker. However, he had no solution for Paul who scored 41 points in Game 6 of the WCF in Phoenix’s blowout 130-103 win that sent them to the NBA Finals.

Center Serge Ibaka did not play a single game in the postseason due to a back injury and Ivica Zubac missed the final two games of the West finals due to a knee injury.

Clippers owner Steve Ballmer and the front office are expected to have a busy offseason with multiple unrestricted free agents on the roster, including Leonard.

Reggie Jackson, who earned the nickname "Mr. June," is another notable free agent.