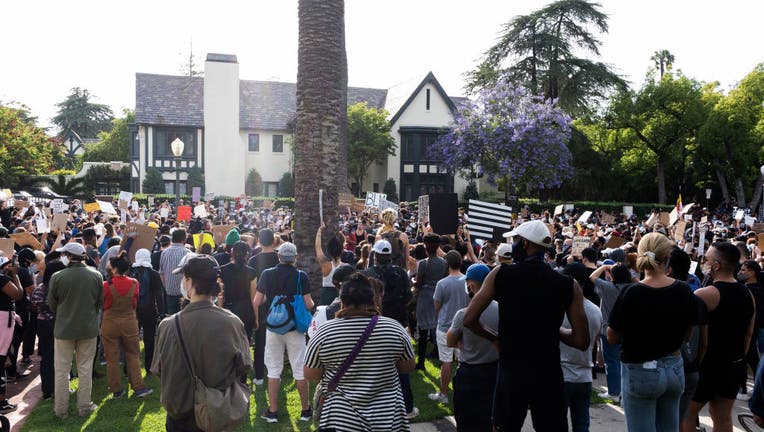 LOS ANGELES - Two days after anti-vaccination activists showed up at the homes of two Los Angeles City Council members, the panel Tuesday directed city attorneys to draw up an emergency ordinance to prohibit protests within 300 feet of the target's residence.

The motion, which was introduced by Council President Nury Martinez using a rarely used City Council rule, comes after an anti-vaccination protester at a Santa Monica rally on Sunday shared the addresses of council members and encouraged people to go to their homes if they vote yes on an ordinance to require at least partial proof of vaccination before entering most indoor public spaces.

"We have one week to stop the (vaccination) passports ... if it's unanimous, we've lost. Sharpen your knives, get your guns, get your food now," the protester said while holding a sign with council members' home addresses. ".... We find out who voted yes and you show up at their house. We need to intimidate these people."

Protesters vandalized the home of Los Angeles Mayor Eric Garcetti on Thursday night after he signed an ordinance to restrict homeless encampments in the city.

After the rally, protesters showed up at the homes of Martinez and Councilman Mitch O'Farrell, including gubernatorial recall candidate David Alexander Bramante. During the public comment period at the Los Angeles County Board of Supervisors meeting Tuesday, he noted he was among the group and urged people to call him to receive council members' addresses and go to their homes to protest.

Before the council voted on the motion, Martinez discussed the experience of having protesters show up at her home.

"I had a group of folks show up at my doorstep, banging on my door, banging on my windows, harassing my neighbors, screaming obscenities into my daughter's bedroom and yelling into bullhorns asking my to come out and threatening my life," she said. "Members, quite frankly, I'm done with the entire thing. I'm done with the threats ... I am prepared to put an end to this."

Martinez said people who want to protest elected officials should go to their offices, not their homes.

"No staffers, no family members of ours should be subjected to this kind of treatment. My address and my home is not a public place for you to come and protest," she said.

The motion requests that the draft ordinance include an urgency clause under which the ordinance would go into effect immediately upon publication, instead of after 30 days, due to the "urgent need to protect elected officials and their staff from threatened intimidation at their residences."

The motion instructs the City Attorney's Office to model the ordinance after a law already in effect in San Jose.

Los Angeles' municipal code currently prohibits "targeted demonstrations focused upon and at or about a private residence" that take place within 100 feet of the address.

Councilwoman Nithya Raman cast the sole dissenting vote, saying the city should focus on enforcing its existing law instead of adding an ordinance that "will likely have the exact same problems in its design and its enforcement."

Councilman Mitch O'Farrell said having protesters show up at his home "traumatized" his neighbors, especially the children who live on either side of his house who heard "unspeakable" language spoken by protesters through bullhorns. He added that protests at council members' homes and the publishing of their addresses on social media started before the anti-vaxxer protesters and has come from left wing protesters, as well.

Councilman Mike Bonin voted for the motion but said he has some concerns about the potential ordinance, saying that the city needs to focus on enforcement of existing laws, as well.

"What I want to know is when this comes back as an ordinance, what are we doing to actually deal with the problem that is very apparent to us right now. Are there any charges of inciting violence that are being brought against the guy who was giving that speech (in Santa Monica) the other day? Are there any prosecutions of the assaults that Proud Boys are doing upon (KPCC) reporter Frank Stoltze a couple of weeks ago? There seem to be acts of violence and acts of threats that could be prosecuted. That may be a more direct way to get about this issue."

Once the City Attorney's Office prepares the draft ordinance, it will be sent to the City Council for a vote.