Footage posted on Instagram shows a tree falling in the strong winds in New Orleans on Aug. 29, 2021, after Hurricane Ida made landfall. Credit - young__polo_ via Storyful

NEW ORLEANS - Ida continued to make its way through the southern U.S. on Monday after making landfall as a hurricane and leaving a trail of destruction in its path, including collapsed buildings, downed trees and flooded roads.

The storm, which has since weakened to a tropical storm, blasted ashore Sunday on the same day 16 years earlier that Hurricane Katrina ravaged Louisiana and Mississippi. Ida’s 150 mph winds tied it for the fifth-strongest hurricane to ever hit the mainland.

Already blamed for one death, the storm blew off roofs and even reversed the flow of the Mississippi River as it rushed from the Louisiana coast toward New Orleans and one of the nation’s most important industrial corridors.

"Tonight, we have confirmed at least one death and sadly, we know there will be others," Louisiana Gov. John Bel Edwards said in a statement late Sunday. "Thousands of our people are without power and there is untold damage to property across the impacted parishes." 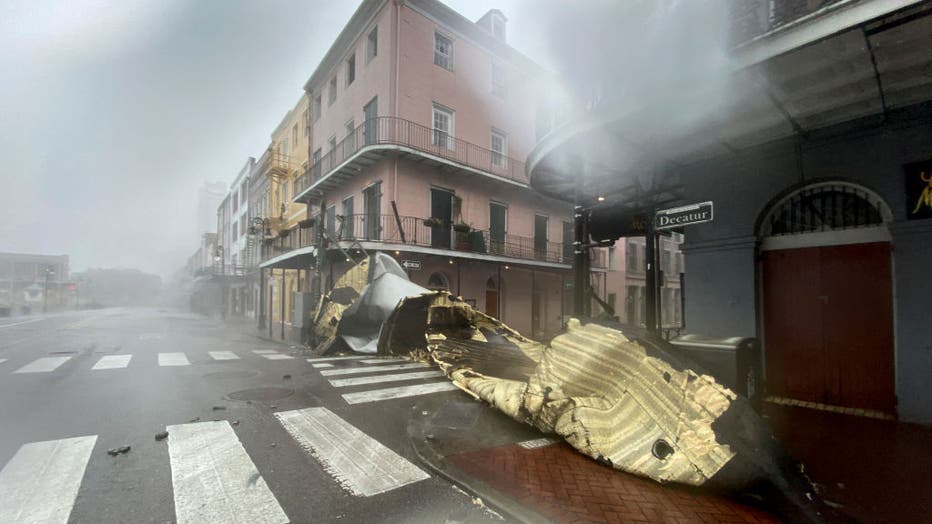 A section of a building's roof is seen after being blown off during rain and winds in the French Quarter of New Orleans, Louisiana on August 29, 2021, during Hurricane Ida. (Photo by PATRICK T. FALLON/AFP via Getty Images)

Damaging winds also tore at awnings, water spilled out of Lake Ponchartrain in New Orleans, and boats broke loose from their moorings. Engineers detected a "negative flow" on the Mississippi River as a result of storm surge, U.S. Army Corps of Engineers spokesman Ricky Boyette said.

Hurricane Ida made landfall in Louisiana on August 29 as a category 4 storm, with maximum sustained winds of 150 mph, the National Hurricane Center reported.(Credit: Paulette Ristine via Storyful)

Another video taken in the Algiers area of New Orleans showed heavy winds pulling up a tree, along with the soil bed it was planted in. Mike Bradley shared the footage on Instagram.

Several hundred thousand customers were without power in the New Orleans area on the evening of August 29, hours after Hurricane Ida made landfall in the state. (Credit: Mike Bradley via Storyful)

A man in Houma shared a video after Hurricane Ida ripped the roof off his home, allowing wind and rain to lash the inside.

A man in Houma, Louisiana, began filming after Hurricane Ida ripped the roof off his home, allowing wind and rain to lash the interior, following the storm’s landfall in the south of the state. (Credit: @trevongauno via Storyful)

Trevon Gauno said he was in his room when the roof was peeled off by the force of the hurricane. Surveying additional damage to the structure, Gauno said, "life is bigger than material things." He told Storyful that he was able to seek shelter at a relative’s home nearby.

Officials said Ida’s swift intensification from a few thunderstorms to a massive hurricane in just three days left no time to organize a mandatory evacuation of New Orleans’ 390,000 residents.

The entire city of New Orleans late Sunday was without power, according to city officials — heightening the city’s vulnerability to flooding and leaving hundreds of thousands of people without air conditioning and refrigeration in the summer heat.

Overall, more than 1 million customers in Louisiana had their power knocked out — and another 80,000 or so in Mississippi were in the dark, according to PowerOutage.US, which tracks outages nationwide.

Forecasters said Monday that life-threatening flash flooding amid Ida’s heavy rain, as well as damaging winds and dangerous storm surge, all continued to be a threat for portions of Louisiana and Mississippi.

The storm was forecast to dump as much as two feet in places as Ida’s center moved over Mississippi.

As of 4 a.m. local time, Ida was located about 95 miles south-southwest of Jackson, Mississippi, and moving north at about 8 mph, according to the National Hurricane Center. It had maximum sustained winds of 60 mph. Forecasters said it would rapidly weaken throughout the morning while still dumping torrential rain over the region.

The Associated Press contributed to this report. This story was reported from Los Angeles and Cincinnati.