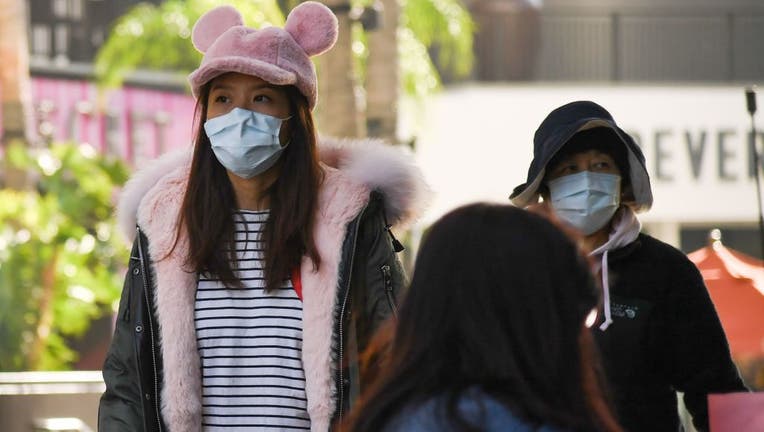 Visitors to the Hollywood & Highland mall in Hollywood wear face masks on January 27, 2020. - Five people in the United States have tested positive for the deadly strain of Coronavirus, one each in Washington, Illinois and Arizona, and two in Sou

LOS ANGELES - Los Angeles County's top public health official said on Tuesday residents should not be alarmed about the coronavirus, despite the spread of the disease in China and the growing number of deaths attributed to it.

"At this moment, (there is) absolutely nothing to be afraid of, "Department of Public Health Director Barbara Ferrer told the Board of Supervisors.

Supervisor Kathryn Barger asked for the update to counter misinformation as many Chinese communities prepare for Lunar New Year celebrations.

"There is no need to panic and there is no need for people to canceltheir activities" Ferrer said. "There's nothing that indicates that there'shuman-to-human transmission in L.A. County."

The first case of coronavirus in Los Angeles County was confirmed Sunday. The patient was a traveler returning through Los Angeles International Airport home to Wuhan City, China, which is the epicenter of the deadly disease.

The person felt sick, told officials and is now being treated at a local hospital well-equipped for the task, Ferrer said.

The individual came into "close contact with a very small number o fother people," she said.

The only people who should be concerned are those who have been in close contact with someone with a confirmed case of the disease for at least 10 minutes, according to Ferrer.

The CDC's guidance indicates people who have casual contact with a case -- "in the same grocery store or movie theater" -- are at "minimal risk of developing infection."

Ferrer provided reassurances about the trajectory of the disease inthe United States to date, given that it has been circulating in China sinceearly December and despite extensive travel between the two countries, onlyfive U.S. cases have been confirmed.

The coronavirus outbreak was first noted in December in the industrial city of Wuhan in the Hubei province of central China.

Since then, more than 5,975 cases have been reported in China, with at least 132 deaths.

"In China, the situation is dire," Ferrer told the board. "What happened in China is not what's happening in the United States right now."

On Saturday, the Orange County Health Care Agency confirmed a case of coronavirus after a traveler from Wuhan tested positive. The two Southland cases are the only confirmed cases in California so far, and two of five in the United States.

The other U.S. cases were reported in Arizona, Illinois and Washington state, according to the latest available data on the website for the Centers for Disease Control and Prevention.

Health officials in San Diego County are awaiting results of tests on a potential case there involving a person who recently traveled to impacted areas in China.

The CDC has expanded screening to 20 airports and will now bescreening all travelers from China, not just Wuhan, as of Tuesday night, Ferrer said.

The United States and several other countries are making plans to evacuate citizens from Wuhan. San Bernardino County officials are working withthe U.S. State Department on a plan to potentially use Ontario International Airport as the repatriation point for up to 240 American citizens, including nine children.

Those passengers would first land in Alaska, where they would be screened by CDC workers before being cleared to proceed into the continental U.S., according to San Bernardino County officials.

Supervisor Hilda Solis said she was worried about discrimination related to the virus.

"I'm really concerned about how people are going to be mistreated,"Solis said.

Ferrer asked all Angelenos to help in that regard.

"People should not be excluded from activities based on their race,country of origin, or recent travel if they do not have symptoms of respiratory illness," she said.

There is no vaccine for the virus, only treatment for the symptoms, but residents can take steps to reduce the risk of getting sick from this andother viruses.

Even if the virus is not spreading in the United States, rumors are.USC students were shaken by an erroneous late night claim on social media that a student on campus contracted the coronavirus.

The school issued a statement Tuesday morning denying anyone on campus was diagnosed with the virus.

For general information about the coronavirus, go to www.cdc.gov.