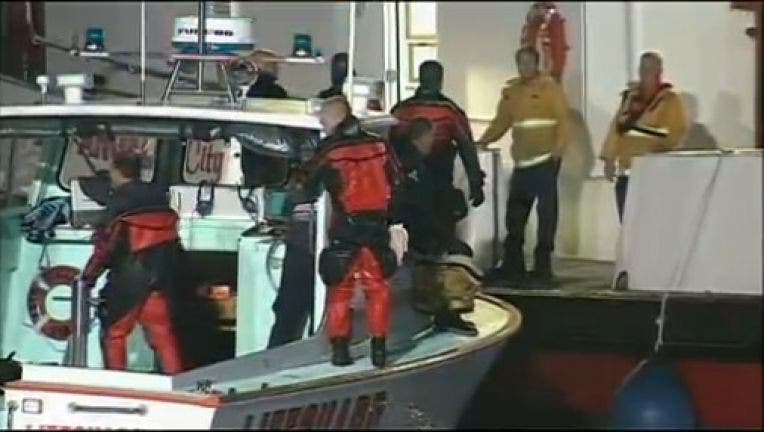 LOS ANGELES - A Hawthorne man was convicted of 14 federal charges on Tuesday for driving his two severely autistic sons and ex-wife off a pier at the Port of Los Angeles to collect on accidental death policies.

Elmezayen also faces capital murder charges in state court stemming from the deaths of his 13-year-old son, Elhassan, and his 8-year-old son, Abdelkarim, along with the attempted murder of his ex-wife, Rehab Diab, who managed to escape despite not knowing how to swim.

"He lined the car up to the one spot that wasn't blocked and hit the gas, the kids buckled inside," Ryan said. "The plan was to kill them and make it look like an accident."​​​​​​​

Elmezayen's attorney, Cuauhtemoc Ortega, insisted the ocean crash was just that -- an accident -- claiming his client mistakenly hit the accelerator, plunging the car into the ocean on April 9, 2015.

Ortega said his client never lied about what happened.

"I'm asking you to go a long way to conclude it was accident," the lawyer told jurors. "Even though it might not seem probable that he misapplied that pedal, that's what happened."

During nine days of testimony, the jury heard how Elmezayen drove a car containing Diab and their two youngest children off the wharf and escaped by swimming out the open driver's side window. Diab survived when a nearby fisherman threw her a flotation device and pulled her toward a ladder, but thetwo children were unable to escape the car and drowned.

Ryan alleged that Elmezayen -- a native of Egypt with no legal status in the United States -- had been planning the scheme for two years. During 2012 and 2013, Ryan alleged, Elmezayen purchased eight accidental death and life insurance policies for his ex-wife and children. If the policies had paid offon all the family members, he would have received more than $6 million, Ryan said.

Jurors heard multiple recorded telephone calls in which Elmezayen contacted insurance companies to confirm that they would not investigate claims made two years after the policies were purchased. Ryan told the jury that the deaths of his two sons took place two years and two days after the final policywas purchased.

"The evidence you've seen has proven the defendant is guilty on every count," Ryan told the jury.

Elmezayen sat with his head down, listening through headphones to an Arabic translator with his eyes shut during closing arguments from both sides.

He appeared to sob when his attorney described his sons' bodies in the funeral home.

Diab, who testified last week that she didn't know about the insurance policies, looked on from the audience.

Ortega countered that Diab, in fact, had known about the policies all along and lied to the jury. At the same time, the defense attorney maintained, the ex-wife and her surviving son didn't believe the incident at the wharf was intentional, but agreed with him that it was an accident.

"She knew about the insurance policies and she knew what they were for," the attorney alleged. "She's lying."

During her testimony, Diab said that on the day the two children died, the defendant took the family for a drive to the port to buy fish and look at ships. He began searching for a parking spot but inexplicably pointed the vehicle toward the murky ocean and sped off the pier, she told the jury.

"I thought he would stop, but the car accelerated towards the sea and I started to scream," Diab testified, adding that Elmezayen did not apply the brakes or utter a sound.

When the car containing Diab and their two sons hit the water, the defendant "went out through the window," making no effort to help anyone in the submerged vehicle, the woman testified.

"I started to feel that death was close and started to recite myprayers," Diab said. "The only thing I remember is I managed to get out ofthe car."

A third son was not in the vehicle and followed his mother on the witness stand last week to describe Elmezayen's often violent relationship with Diab.

Elmezayen's other attorney, Christy O'Connor, denied there was a scheme to commit murder for financial gain. Instead, she alleged, her client loved his family but suffers from hypochondria and severe anxiety about the future -- which explains his purchase of copious amounts of life insurance.

Diab told the jury that the family suffered from money problems so severe that they once lived in a dilapidated house in Watts. Diab said both she and her then-husband worked for a time as security guards and also received $2,500 a month from the state to care for the two disabled children.

The defendant did not take the stand during the trial.