Group of suspects stole hammers, crowbars at The Home Depot in Lakewood

A robbery incident is under investigation at The Home Depot in Los Angeles County.

LOS ANGELES - The LA County Sheriff's Department is investigating a ‘flash mob’ robbery that occurred at a Home Depot in Lakewood on Black Friday.

The Los Angeles County Sheriff's Department responded to reports of a robbery around 7:45 p.m. at the Home Depot store in the 5000 block of Hardwick Street in Lakewood.

According to LASD, eight people – between the ages of 15 and 20 – stole hammers, crowbars and other tools from the store. They say the entire hammer section was cleared out… enough items were taken to be considered grand theft. The suspects took off with an approximate value of $400 worth of tools.

"We tried to stop them," store employee Luis Romo told FOX 11. "We closed the front entrance and they put their sledgehammers up and whoever got in the way, they were going to hurt them."

The group threatened one customer, "but he got away," Romo said.

It's a crime trend plaguing LA County shoppers this holiday season...smash and grab robberies. Several high-end stores were hit this week, even a Home Depot, as large groups of people enter the stores, break glass and take off with items.

Around 9 p.m. Friday, officers with the Beverly Hills Police Department spotted a red vehicle with front-end damage matching the description of the vehicle used in the robbery. They conducted a traffic stop and the four occupants were taken into custody.

They also found new tools in the vehicle.

The suspects were identified as Everett Lestorkindle of Hawthorne, 22, and Los Angeles residents Bronz Jackson, 20, Shawn Jones, 19 and Daniel DeHughes, 19.

Lestorkindle, Jackson and Jones were being held in lieu of $20,000 bail and are due Tuesday in the Bellflower Courthouse. DeHughes was being medically treated prior to being booked.

"There are still several more suspects, and suspect vehicles, being sought in this flash mob burglary and many more like it,'' the sheriff's department statement said.

This robbery was another in a series of so-called "flash mob" or "smash-and- grab" robberies that have occurred across Los Angeles County in the past week, several of them taking place on Black Friday. 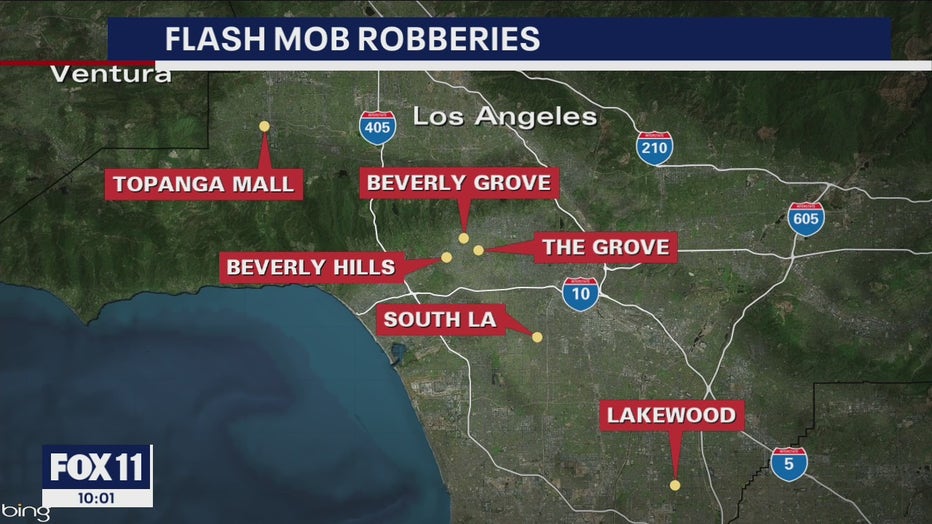 On Wednesday, robbers attacked a security guard and stole designer handbags worth an estimated $25,000 from the Nordstrom store at the Westfield Topanga mall in Canoga Park. Also Wednesday, "flash mob" suspects entered several stores in the 8500 block of Beverly Blvd at the Beverly Center and grabbed merchandise without paying and ran out, the LAPD said.

Those crimes occurred two days after a smash-and-grab robbery by a mob of at least 20 people at the Nordstrom store at the upscale Grove shopping center in the Fairfax district Monday evening. The suspects in that robbery fled the scene in at least four vehicles but were later arrested following a chase.