A rash of 'smash-and-grab' robberies has law enforcement on high gear, adding extra officers to secure malls and shopping centers this holiday season.

The Los Angeles Police Department will be "dedicating resources to some of these higher-end locations to deter further acts of violence," Chief Michel Moore told the Police Commission at its Tuesday meeting, one day after a smash-and-grab robbery carried out by at least 20 people at the Nordstrom's store at the upscale Grove shopping center in the Fairfax District.

On Wednesday, groups of suspects entered several stores at the Beverly Center and grabbed merchandise without paying and ran out, according to an LAPD statement.

"It’s scary, you really have to watch your surroundings when you come in here," said shopper Debbie Stein

Robbers also attacked a security guard and stole designer handbags worth an estimated $25,000 from the Nordstrom's store at the Westfield Topanga mall in Canoga Park on Wednesday evening.

The Citadel Outlets in Commerce opened for Black Friday shopping at 8 p.m. Thursday with new security measures in place. 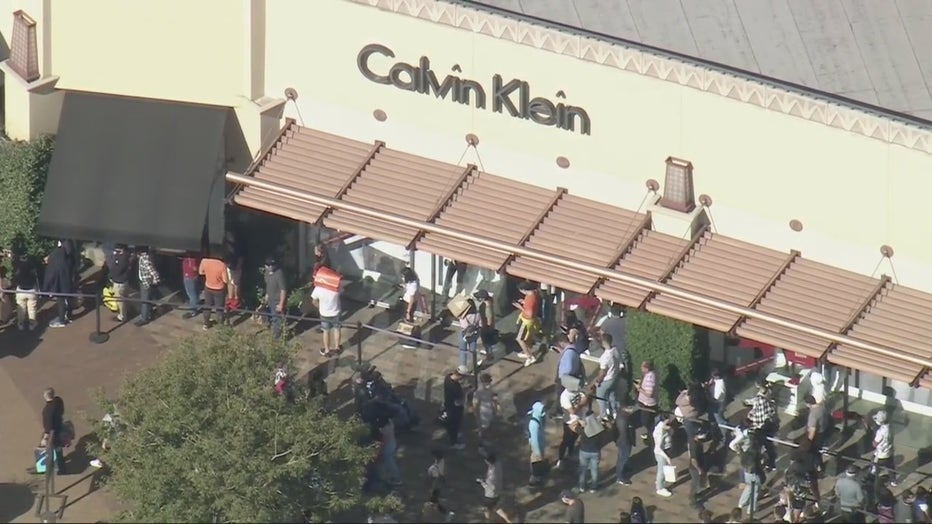 SkyFOX over the Citadel Outlets on Black Friday morning

While Black Friday is considered the traditional start of the Christmas shopping season, it "stopped being a one-day event years ago, and this year some consumers started shopping for Christmas as early as Halloween," said Matthew Shay, president and CEO of the National Retail Federation, the world's largest retail trade association.

"Consumers are starting earlier than ever to be sure they can get what they want, when they want it, at a price they want to pay," Shay said.

Shay said he is "expecting another record-breaking holiday season this year and Thanksgiving weekend will play a major role as it always has."

A survey conducted for the National Retail Federation by Prosper Insights & Analytics found that 158.3 million people expected to shop from Thanksgiving Day through Cyber Monday, compared to 156.6 million in 2020 and 165.3 million in 2019.

RELATED: The best places to shop on Black Friday 2021

The survey found that clothing continued to top the list of what people plan to buy during Christmas shopping at 53%. Gift cards were second at 46%, followed by toys (39%), books/music/movies/video games (35%) and food/candy (31%).