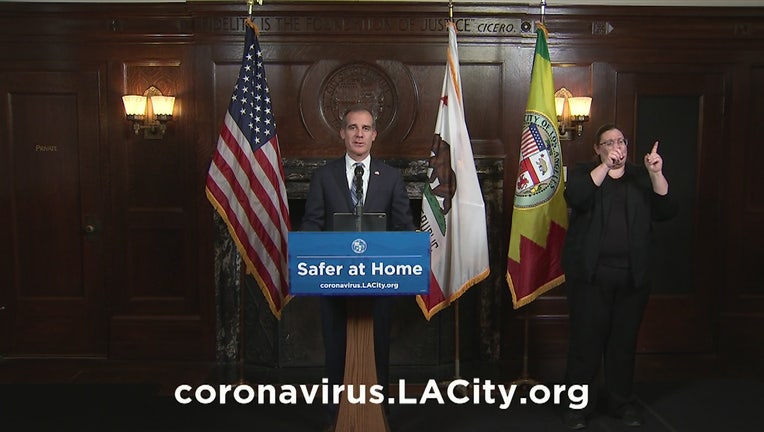 LOS ANGELES - Los Angeles Mayor Eric Garcetti said Wednesday he has authorized city department heads to take "any action necessary within their budgets" to obtain materials, construction equipment, services and anything else that can help keep people safe during the coronavirus pandemic.

"This might sound small, but this is a big deal," Garcetti said. "We haven't just reduced red tape. We've completely eliminated it. That means that (Recreation) and Parks staff at emergency shelters can get hand sanitizers more quickly. It means that workers at (Los Angeles International Airport) can get vital personal protective equipment as they interface with travelers coming in from around the world."

Garcetti said the city has no plans to lay off any of its staff, saying such a move would only exacerbate the crisis. The state of California announced Wednesday that more than 1 million people have filed for unemployment since the Safer at Home orders were issued.

More than 1,000 city employees have been working during the pandemic as part of the Los Angeles Disaster Service Worker Program, Garcetti said.

Garcetti said based on data he's received, Los Angeles is about six days from seeing the same or similar coronavirus numbers that have been reported in New York City, which has been dubbed by health professionals the epicenter of the U.S. outbreak.

"I want to be clear, the worst days are still ahead," the mayor said. "It's a tough thing for me to say, but we look at these projections and ... it's coming here. We've taken actions earlier and swifter, but nobody is immune from this virus."

A $2 trillion federal stimulus package will provide Los Angeles with about $400 million to assist LAX operations, $700 million for the Metropolitan Transportation Authority, "tens of millions" in local assistance for areas with low-income residents and $32 million in emergency homeless assistance.

Garcetti acknowledged the details of the package are still being worked out and it doesn't address assistance for immigrants, but he said he is willing to spend whatever it takes in city funding to help with outbreak prevention efforts, with anticipation that the city will be reimbursed.