From unhoused to HBCU: Catching up with Jeremiah Armstead

FOX 11 caught up with Jeremiah Armstead, the homeless teen basketball player who now plays college hoops for Fisk in Nashville.

LOS ANGELES - Dorm curfew is midnight… new rules for a college kid who spent much of his high school years unhoused.

Jeremiah Armstead is an 18-year-old whose life direction changed overnight when a community came together in Los Angeles to send him to college. He landed at Fisk University in Tennessee.

FOX 11 was the first to report on Armstead; and Christine Devine paid a visit to him in Nashville just weeks into the fall semester. In August, Armstead was living in a car with his mother, younger sister, and brother. The family found a safe place through the 'Do Good Daniels Family Foundation' who operate a domestic violence shelter. The non-profit ‘Sisters of Watts’ stepped in and saw a better future for him.

They launched a fundraising effort to pay for college and reached out to ‘We Educate Brilliant Minds’ which works to get inner city kids into HBCUs, Historically Black Colleges, like Fisk.

Armstead says he spent much of his high school years unhoused with his family moving from shelters and housing locations, even staying in their car. He spent his last year at Long Beach Poly High School and graduated in 2022, where he was the center on the basketball team.

He's now a Fiskite and on the basketball team in Nashville. The coach is former NBA player Kenny Anderson, a one-time Los Angeles Clipper. At 6'5ft, Armstead found a love of basketball when he was 14-years-old.

A highlight for me was meeting his teammates at the school cafeteria! Student Body President,Daikerra Sweat, gave us a tour of campus and shared her knowledge of the history of the school which was founded in 1866. It's home to Nashville's oldest building, she says.

In a more haunting moment that will stick with me… she shared the heartbreaking history of the KKK and a bell on campus that would alert students and faculty that the Ku Klux Klan was coming.

The bell is now rung when Fisk University wins a basketball or volleyball game. 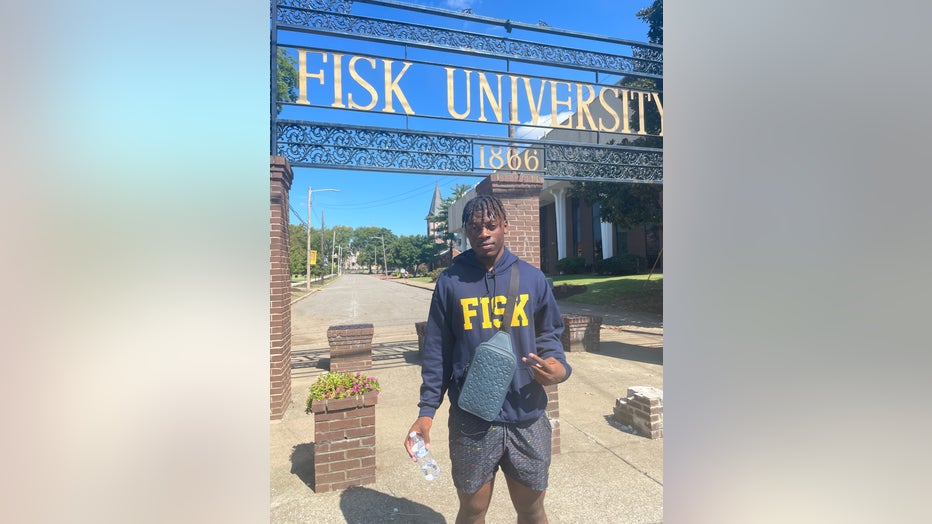 Back to his dorm room where you'll find Armstead lives by faith and keeps a bible on his desk. It's kept open on the book of Jeremiah. He attends service in Nashville each Sunday with a family that has taken him under their wing.

Armstead says he's enjoying the southern hospitality and says everyone has been welcoming. He says he talks by phone with his mom every day.