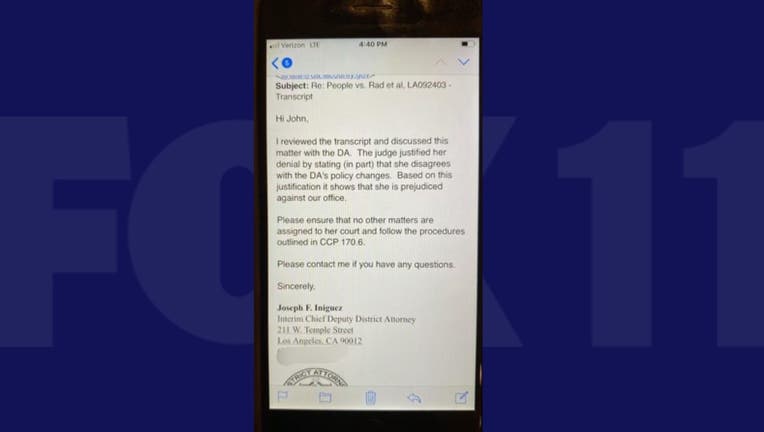 Sources within Gascon's office confirmed the authenticity of the email, Melugin reports. Gascon's office appears to accuse the judge for making personal comments in court that were biased against Gascon, which would go against the state's anti-bias laws.

Over the last couple of days, Gascon has faced questions and scrutiny from families impacted by violent crimes in LA County. On Monday, FOX 11 has confirmed Gascon's office is seeking to dismiss all special circumstance allegations and enhancements against a Utah man accused of a double murder, including the shooting death of a Los Angeles County deputy at a fast food restaurant in Alhambra in 2019.

These changes would mean that if a judge allows the dismissals, the suspected double murderer Rhett Nelson could be eligible for parole in the future. Nelson was charged in the shooting deaths of off-duty LASD deputy Joseph Gilbert Solano and Russian skateboarder Dmitry Koltsov.

On Tuesday, the family of a child living with a traumatic brain injury told FOX 11 Gascon's new policies may allow the child's abuser to get away with a slap on the wrist.

“At the age of 6 months, this little child was bludgeoned over the head by a babysitter. She suffered traumatic brain injury; she had a skull fracture, multiple hematoma in her head, she’s now permanently blind and now the District Attorney wants to drop the great bodily injury allegation which would mean this defendant would be eligible for probation, she would serve no time for a heinous, heinous crime,”  Sam Dordulian, the family’s Pro Bono attorney, told FOX 11 earlier in the week.