LA HABRA, Calif. - Dramatic new body camera footage has been released regarding a 2021 shooting outside the La Habra police station that left the suspect dead and one officer in the hospital.

The shooting happened on Aug. 6, 2021. Around 7 p.m. that evening, the La Habra Police Department received a call from a woman telling dispatchers that a driver had been following her from the freeway, tailgating her.

"I've been making turns, and he's following me," the caller said to the 911 operator. "Every time I switch a lane, he follows me."

The caller told the dispatcher that she was driving to the La Habra police station. When she got there, the other driver parked behind her.

A 911 transcript shows a driver was scared, saying she was being tailgated by a man who'd followed her from the freeway.

Body camera footage released Monday showed what happened next. A La Habra Police officer, later identified as Mark Milward, walked to the front of the station to find a man, identified as Matthew-Tuan Ahn Tran, standing in the foyer. Milward is heard asking Tran why he was there, and if he was related to the cars parked in front of the station. Tran told Milward "no," and Milward continued back to the parked cars, saying "We'll get to you in a sec."

As Milward walks back to the cars, another officer, Abigail Fox, is heard shouting, "Hey, hey hey!" Milward then turned around to find Tran pointing a gun at him, before Tran fired multiple shots at him. Milward was sent to the ground. Fox is heard returning fire, ultimately killing Tran. 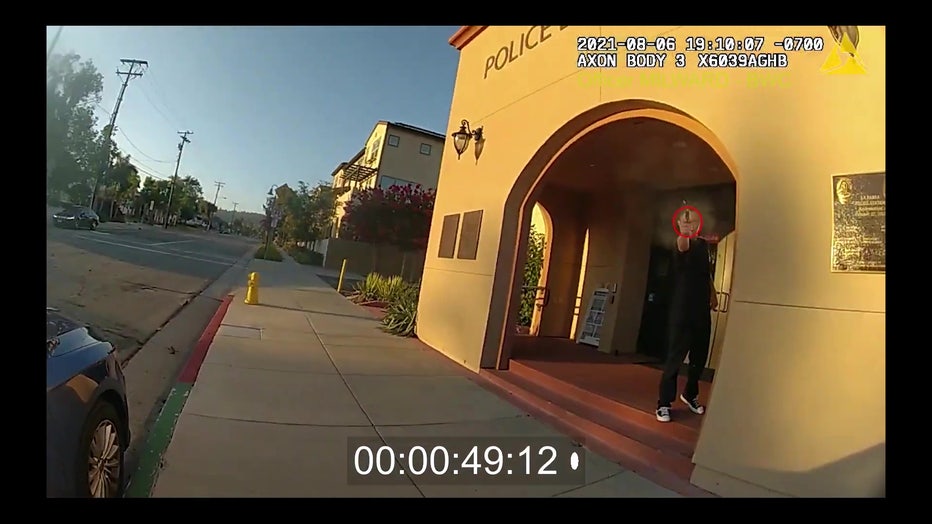 Surveillance video from the station also showed Tran pulling the gun out of his waistband after Milward turned his back. The returning shots sent Tran to the ground, but the gun was still near his hand. Fox yelled at Tran, demanding he drop the gun, before officers determined that he was dead.

In a report released Monday by the Orange County District Attorney's Office, an autopsy confirmed that Tran was killed by Fox's gunshots. That same report also concluded that Fox's use of force was justified.

"Officer Fox was more than reasonable in her use of force in this situation," the report read. "Tran fired a deadly weapon twice at a fellow officer. [Tran's] dangerous behavior showed his resolve to attack Officer Milward. Had Officer Fox not returned fire, Tran would most likely have continued to shoot until Officer Milward died."

Officer Milward was sent to the hospital in critical condition that day, but was released from the hospital nearly a week later.