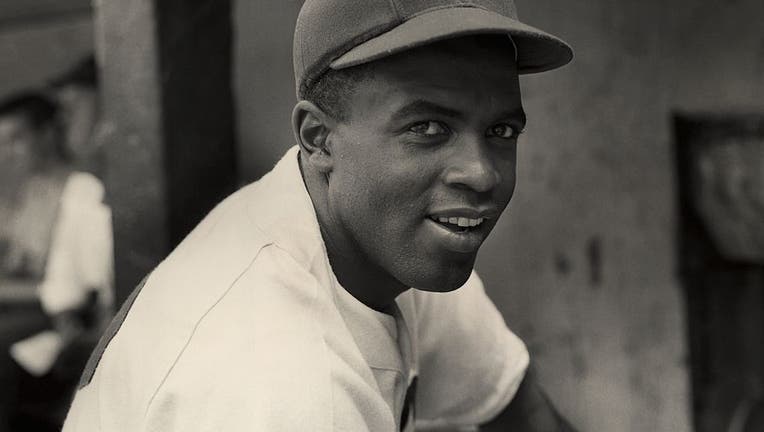 circa 1945: A portrait of the Brooklyn Dodgers' infielder Jackie Robinson in uniform. (Photo by Hulton Archive/Getty Images)

Dodger players, manager Dave Roberts and Jackie Robinson Foundation scholars will be joined by the Robinsons for what the team describes as "an intimate discussion about Jackie and the Robinson family legacy at the Jackie Robinson statue in the Centerfield Plaza," before the stadium gates open.

All players and other on-field personnel will wear Robinson's No. 42 as they have done on each Jackie Robinson Day since 2009. For the first time, all teams will use Dodger blue for their "42" jersey numbers, regardless of their primary team colors.

"42" patches with team-specific uniform colors will appear on Nike uniform sleeves and on New Era caps. MLB will donate all licensed royalties from the sales of caps to the Jackie Robinson Foundation, founded by Rachel Robinson in 1973, the year following her husband's death at the age of 53. It provides four-year college scholarships to disadvantaged students of color.

The number 42 was retired throughout Major League Baseball in 1997, on the 50th anniversary of Robinson's April 15, 1947, debut with the Brooklyn Dodgers.

The Dodgers will invite 75 special guests onto the field during pregame ceremonies -- 42 Jackie Robinson Foundation scholars and alumni and 33 students from John Muir High School in Pasadena which Robinson graduated from.

Fans can donate by texting JACKIE42 to 41623. Friday's 50/50 Raffle proceeds will be dedicated to the Jackie Robinson Foundation.

An MLB-produced video, "Play, Run, Win, Rise," will be shown at all stadiums on Jackie Robinson Day, reflecting on his legacy as a Hall of Fame and trailblazing player, social justice advocate, civil rights icon and pioneer in business and broadcasting.

The video also highlights the critical influence Rachel Robinson has had on their family's legacy, particularly through the Jackie Robinson Foundation.

Dodger pitcher David Price is among the players donating their salaries from Friday's games to The Players Alliance to support struggling inner city and rural baseball teams, the charity announced.

"Players sacrifice their pay because they believe that diversity is an asset that should be actively pursued," said former Dodger outfielder Curtis Granderson, The Players Alliance board chair.

The Players Alliance was formed by active and retired professional baseball players. It describes its mission as seeking to "address baseball's systemic barriers to equity and inclusion by creating pathways to opportunities on and off the field for an undeniable pipeline of black talent." 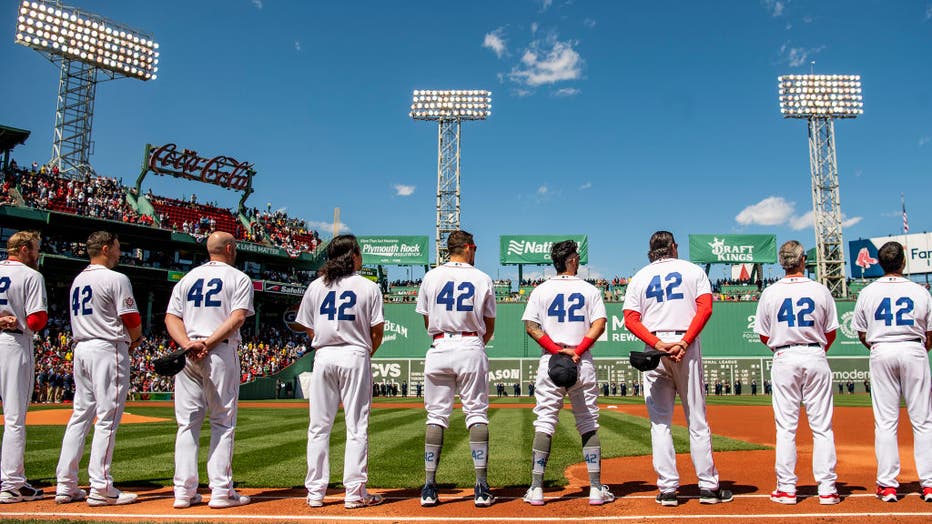 BOSTON, MA - APRIL 15: Members of the Boston Red Sox display the number 42 in recognition of Jackie Robinson Day as starting lineups are introduced before the 2022 Opening Day game against the Minnesota Twins on April 15, 2022 at Fenway Park in Bosto

"Our supporters reflect every racial, religious and professional level found in the sport and they are committed to upholding Jackie's legacy by breaking today's barriers," Granderson said.

Robinson went hitless in four at-bats in his major league debut, but scored what proved to be the winning run in Brooklyn's 5-3 victory over the Boston Braves in front of a crowd announced at 25,623 at Ebbets Field.

Robinson played his entire major league career with the Brooklyn Dodgers, helping lead them to six National League titles during his 10 seasons, and, in 1955, their only World Series championship in Brooklyn.

Robinson's successful integration of Major League Baseball is credited with helping change Americans' attitudes toward Blacks and being a catalyst toward later civil rights advances.

"Seventy-five years ago, Jackie Robinson took the field under incredibly challenging circumstances and unimaginable pressure. Yet through his courage, character, skill, and values, he brought well-needed change to our game and advanced the civil rights movement in our country," MLB Commissioner Robert D. Manfred, Jr. said.

"During this special anniversary year, it is a top priority for MLB to honor Jackie's contributions and legacy, recognize the impact Rachel has made through the Jackie Robinson Foundation, and continue to keep Jackie's memory and values alive for today's generation of players and fans."