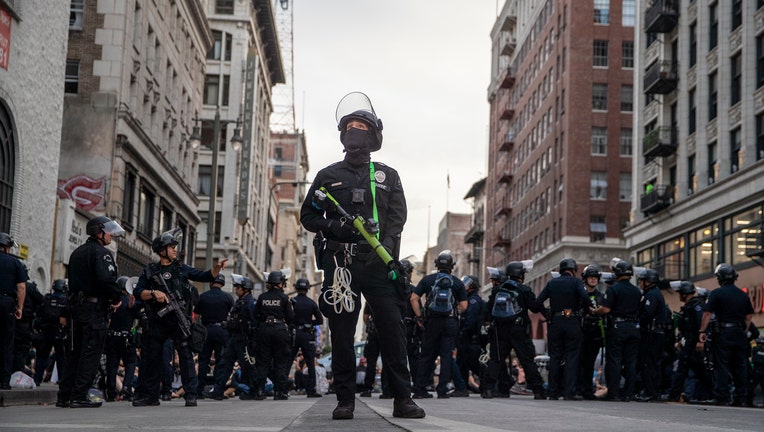 LOS ANGELES - Los Angeles Police Chief Michel Moore said Tuesday that a directive has been issued to LAPD personnel about restricting the use of 40mm and 37mm projectile launchers against crowds of protesters as the Minnesota murder trial of a former police officer charged in the death of George Floyd nears an end, raising concerns about a repeat of mass protests and unrest that occurred last summer.

The directives come after a federal judge issued orders restricting the department's use of the launchers against crowds of protesters after Black Lives Matter-Los Angeles filed a request for a temporary restraining order against the LAPD.

Black Lives Matter-Los Angeles filed the temporary restraining order against the LAPD in light of a March 25 protest in Echo Park and a March 13 demonstration in Hollywood in which police and protesters clashed and a member of the press was struck by a projectile and knocked out, suffering a concussion, according to court documents.

U.S. District Judge Consuelo B. Marshall granted BLM-LA's request to halt the LAPD's use of the so-called "less lethal" weapons in public demonstrations "except when deployed by officers that are properly trained."

The jury in the Derek Chauvin trial is expected to go into deliberations this week and cities across the country are bracing for possible protests once the verdict is announced, including Beverly Hills.

She also restricted police from "aiming the weapons at the upper bodies of demonstrators at close range within five feet."

The judge further ordered that LAPD must give a verbal warning to disperse, consistent with the department's use of force directive, and allow protesters a reasonable opportunity to comply before deploying a 40mm or 37mm launcher, "except when an officer is attacked."