CDC Director Rochelle Walensky urged teens and adolescents to get vaccinated against COVID-19, pointing to high hospitalizations among this group in March and April.

The fast-spreading delta variant of the coronavirus has been gaining traction worldwide since it was first detected in India.

It’s a version of the coronavirus that has been found in more than 80 countries. In the U.S., it makes up at least 20% of reported COVID-19 cases and is expected to become the dominant strain in the country, according to health officials.

The delta variant got its name from the World Health Organization, which names notable variants after letters of the Greek alphabet.

Viruses constantly mutate, and most changes aren't concerning. But there is a worry that some variants might evolve enough to be more contagious, cause more severe illness or evade the protection that vaccines provide.

Here’s what is currently known about the delta variant:

The U.S. Centers for Disease Control and Prevention recently classified the delta variant, formerly known as B.1.617.2, as a "variant of concern." This designation is given when there is mounting evidence that the variant may spread more easily or cause more severe disease resulting in increased hospitalizations or deaths.

Experts believe the delta variant spreads more easily because of mutations that make it better at latching onto cells in our bodies. On its website, the CDC notes "increased transmissibility" with the delta variant and the potential for it to make certain monoclonal antibody treatments less effective.

In the United Kingdom, the variant is now responsible for 90% of all new infections. In the U.S., the mutant version now accounts for more than 20% of new COVID-19 infections in the U.S., doubling in just two weeks, the CDC said on June 22.

It is responsible for half of the new cases across a swath that includes Missouri, Iowa, Kansas, Nebraska, Colorado, Montana, North Dakota, South Dakota, Utah and Wyoming, according to data shared June 23.

CDC Director Rochelle Walensky previously warned that it will likely become the dominant coronavirus strain in the U.S. and encouraged Americans to get vaccinated to be protected. 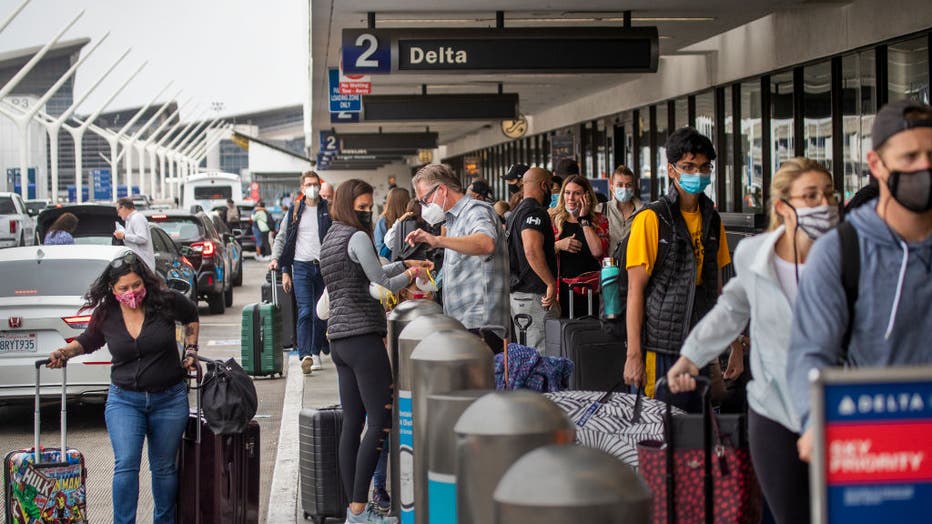 FILE - Travelers wait in line to check in for their flights at LAX Delta Airlines Terminal 2 on May 28, 2021, in Los Angeles, California. (Allen J. Schaben / Los Angeles Times via Getty Images)

Is the delta variant more deadly?

It's not clear yet whether the variant makes people sicker since more data needs to be collected, Dr. Jacob John, who studies viruses at Christian Medical College at Vellore in southern India, told the Associated Press.

Regardless, many health experts have warned of the variant’s potential to set back progress made in the pandemic. The World Health Organization said the delta variant is "the fastest and fittest" of the known coronavirus strains and warned it will "pick off" those most vulnerable "more efficiently" than previous strains.

"All of these viruses have been lethal in their own regard," Dr. Michael Ryan, executive director of the WHO’s health emergencies program, said during a June 21 news conference. "This virus has the potential to be more lethal because it’s more efficient in the way it transmits between humans and it will eventually find those vulnerable individuals who will become severely ill, have to be hospitalized and potentially die."

Do the current COVID-19 vaccines work against the delta variant?

Studies have shown that the available vaccines work against variants, including the delta variant.

Researchers in England studied how effective the two-dose AstraZeneca and Pfizer-BioNTech vaccines were against it, compared with the alpha variant that was first detected in the U.K. The vaccines were protective for those who got both doses but were less so among those who got one dose.

The findings are why experts say it's important to be fully vaccinated. And it's why they say making vaccines accessible globally is so critical.

Fauci, speaking during a COVID-19 briefing on June 22, noted the effectiveness of the vaccines against the delta strain.

"Good news: Our vaccines are effective against the delta variant," he said. "We have the tools. So let’s use them, and crush the outbreak."

President Biden says 500 million doses of the COVID-19 vaccine produced in the United States will be sent out to countries around the world this year and intro early 2022.

What’s going on with the delta variant in Missouri?

As the U.S. emerges from the COVID-19 crisis, Missouri is seeing an alarming rise in cases because of a combination of the fast-spreading delta variant and stubborn resistance among many people to getting vaccinated.

The state now leads the nation with the highest rate of new COVID-19 infections, and the surge is happening largely in a politically conservative farming region in the northern part of the state and in the southwestern corner, which includes Springfield and Branson, the country music mecca in the Ozark Mountains where big crowds are gathering again at the city’s theaters and other attractions.

While over 53% of all Americans have received at least one shot, according to the CDC, most southern and northern Missouri counties are well short of 40%. One county is at just 13%.

"If people elsewhere in the country are looking to us and saying, ‘No thanks’ and they are getting vaccinated, that is good," said Erik Frederick, chief administrative officer at Mercy Hospital Springfield, which has been inundated with COVID-19 patients as the variant first identified in India rips through the largely non-immunized community. "We will be the canary."

Cases remain below their winter highs in southwestern Missouri, but the trajectory is steeper than in previous surges, Frederick said. As of June 22, 153 COVID-19 patients were hospitalized at Mercy and another Springfield hospital, Cox Health, up from 31 just over a month ago, county figures show.

These patients are also younger than earlier in the pandemic — 60% to 65% of those in the ICU over the weekend at Mercy were under 40, according to Frederick, who noted that younger adults are much less likely to be vaccinated — and some are pregnant.