LOS ANGELES - Leaders in the Black and Korean American communities joined Mayor Eric Garcetti and Rep. Karen Bass, along with family members of Rodney King and Latasha Harlins, Friday to urge unity among all Angelenos as the city recognizes the 30-year anniversary of the 1992 L.A. riots.

It was exactly 30 years ago -- following the acquittal of four white police officers who had been captured on videotape beating King, a Black motorist -- that Los Angeles erupted for six days of rioting and looting and fires, much of it in South Los Angeles and Koreatown. When it was over, dozens of people were dead, thousands were injured and millions of dollars in property had been damaged.

"To the families that lost someone, to the children of business owners who still haven't slept a single good night since then, to the communities that have moved on without being moved up, the anger and the grief that exploded 30 years ago are still very real and present in trauma here today," Garcetti said. 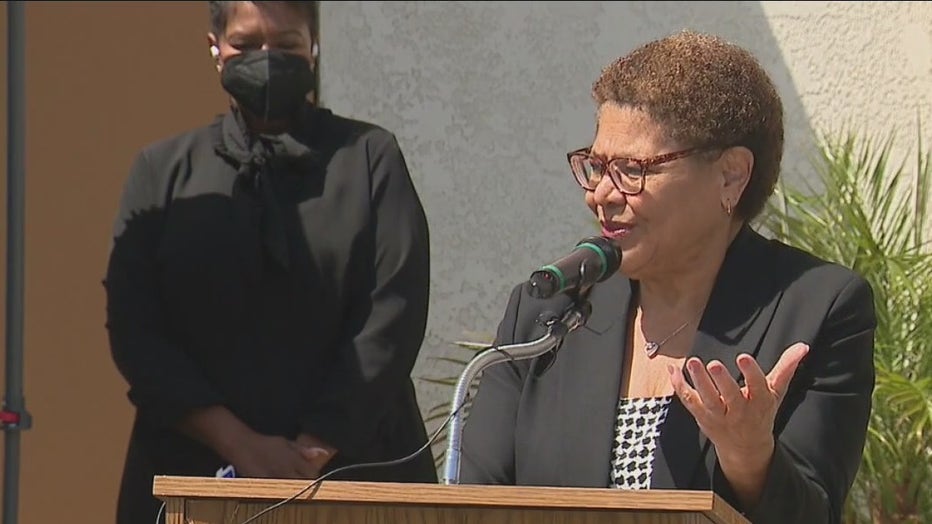 The group gathered at 11 a.m. at the intersection of Florence and Normandie avenues, the epicenter of the unrest that followed a Simi Valley jury's acquittal of the four LAPD officers on charges of using excessive force in the videotaped beating of King.

Operation HOPE, a major financial empowerment nonprofit that was founded by Bryant immediately after the riots, provided a community bus tour that began at the First African Methodist Episcopal Church at 9 a.m., as part of the anniversary.

"Thirty years ago, the world changed, and so did I. The L.A. uprising crystallized my vision for what would later become Operation HOPE -- a vessel dedicated to economic empowerment to all, especially those impacted by the destruction of that day," Bryant said in a statement ahead of the event. "During this bus tour, we will join hands to recognize its lasting impact and continue charting a course to help ensure we never repeat that ugly page in America's history."

Bass said she was driving by the intersection of Florence and Normandie avenues on April 29, 1992, during the early hours of the unrest. She spoke to City News Service on Thursday about what she remembered, saying she was on her way to the First African Methodist Episcopal Church to meet with other community leaders when she "got stuck on the corner of Florence and Normandie when the violence was starting."

She added that she made it home safely, "but it was a perilous journey home."

As the Southland marks the riots' 30th anniversary, officials and community leaders are urging unity among communities that at one point were pitted against each other.

"My late father, Rodney King, became synonymous with police brutality to some people. But our family remembers him as a human being -- not a symbol," said Lora King, CEO of the Rodney King Foundation. "He never advocated for hatred or violence and pleaded for peace as the city burned by asking, `Can we all get along?' That's my father's legacy and what the King Foundation is about -- unity. And bringing people together."

Connie Chung Joe, CEO of Asian Americans Advancing Justice-Los Angeles, told City News Service that the anniversary of the riots is "a reminder of how racial injustice and anti-Blackness, particularly within our criminal justice and law enforcement systems, has persisted for decades in this country."

She added that during the COVID-19 pandemic, two movements have achieved national prominence -- Black Lives Matter and Stop Asian Hate. And she noted that "it's a good moment to think about what Black and Asian racial solidarity truly looks like."

"This anniversary is an opportunity to move beyond the pitting of communities against one another and seek a pathway towards true interracial solidarity building," she said.

Eunice Song, executive director of the Korean American Coalition, said in a statement to City News Service that she views the 1992 riots as the moment when Korean people living in Los Angeles had their identity "reborn as Korean Americans."

"They began communicating with their communities and formed community organizations to bridge cultural gaps and advocate for themselves out of necessity," she said, adding that the Korean community "transformed itself from insular observers to active political stakeholders within Koreatown today."

Garcetti said Thursday that 1992 was "both a trauma and a turning point for our city -- a moment of pain and destruction from which we emerged stronger and more resilient."

"In the last three decades, we have made progress to build a city where resources, opportunity and hope are available for all. On this 30th anniversary, let's remember the lessons from 1992 to forge a better and more prosperous Los Angeles for everyone who calls this city home," he added.

But the widespread calls for unity come as a Loyola Marymount University survey released Thursday said that roughly 68% of respondents found it very or somewhat likely that riots or other disturbances like those that occurred in 1992 will occur in the next five years -- the highest percentage in the history of the survey, which has been conducted regularly since 1997.

Bass, who is running for mayor this year, said she was "pretty shocked" by the survey's results, and added that "we absolutely cannot allow things to get so bad for people to be so despondent and so desperate that they tear up the city. We can't have that happen again."

She also noted that similarities between 1992 and now include "a real sharp economic divide between those at the top and those at the bottom struggling to not fall off a cliff."

"And the similarity with now is that we're in another situation where the economic divide is really large," she said.

The "most dramatic expression of that," she added, is the homelessness crisis in Los Angeles -- where the city's most recent count, in 2020, found that more than 41,000 people were living on the street. Bass said she believes the count conducted this January will likely show that about 50,000 people are unhoused in Los Angeles, once the count's results are released over summer.

L.A. City Councilman Herb Wesson, who represents areas of South Los Angeles and Koreatown -- which suffered disproportionate property damage during the riots -- told City News Service that the results of the LMU survey make sense considering the mass protests in the U.S. and internationally following George Floyd's murder by a Minneapolis police officer in 2020.

"The only way to reduce the odds of something like that occurring is for people to feel that they're given a fair shake, that everybody starts at the same starting line and ... people see what is perceived to be positive changes where it related to equity and fairness," Wesson said.

The councilman also said, remembering the time ahead of the 1992 riots, that the public was "guardedly optimistic that the right action was going to occur because this was really the first time that there was some actual video footage of something like this."

"I think that when it came out, the community was highly disappointed. ... They may have been more disappointed because this time they had hope."

Wesson on Friday will gave opening remarks for a virtual screening of the 1994 documentary "The Fire This Time," which chronicles Los Angeles leading up to and during the riots. The screening is organized by the Los Angeles Public Library.

Also on Friday, at 4 p.m., community leaders will come together in Koreatown for an event to mark the 30th anniversary. The event is hosted by Chung Joe and Song, along with James An of the Korean American Federation of Los Angeles, the Koreatown Youth and Community Center's Steve Kang, the Los Angeles Urban League's Michael Lawson and the First African Methodist Episcopal Church of Los Angeles' Rev. "J" Edgar Boyd. The free, outdoor event at Liberty Park, 3700 Wilshire Blvd., is aimed at bringing together Angelenos, along with Black and Asian musicians, cultural performers and spiritual leaders to assist in healing and reflection.