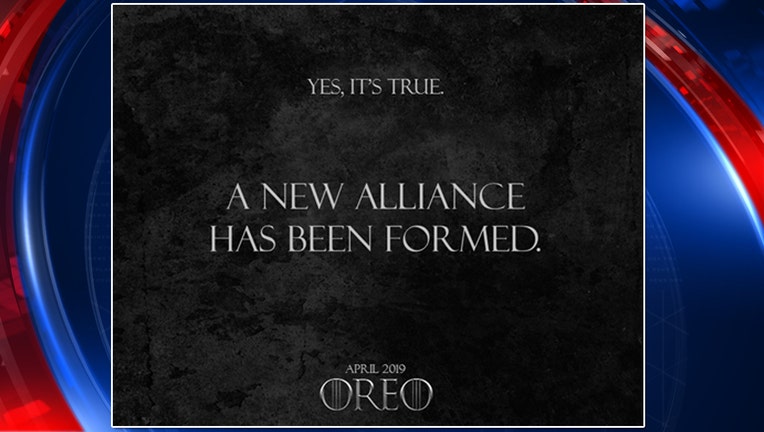 TAMPA, Fla. (FOX 13) - One of America's favorites is pairing up with another favorite for an epic release in the coming weeks.

The release is expected to coincide with premiere of the Game of Thrones' final season in April.

Oreo released a video on Instagram alluding to the cookie release with the caption, "Cookies are coming." The video shows the word "Oreo" morphing into the hashtag: #ForTheThrone.

The final season will premiere April 14.

ET recently spoke with David Nutter, director of "Thrones'" season eight premiere, who teased that the final season will absolutely "live up to the hype."

"It was the first time that I was able to actually direct the premiere episode of the season, so I'm just nervous. Hopefully, the audience will like it, starting season eight, but I'm very confident that they will," he said, admitting that while many characters have died on his watch in scenes like the Red Wedding, he just couldn't reveal if the trend continues.

"I know that I can say this: If you're a fan of the show, you will be completely satisfied by where the series goes to. They've really done a tremendous job in servicing the drama and the characters and so forth, and there are many ups and downs and twists and turns all across the "Game of Thrones" society and the world they are," he added.

Watch the season finale trailer below: