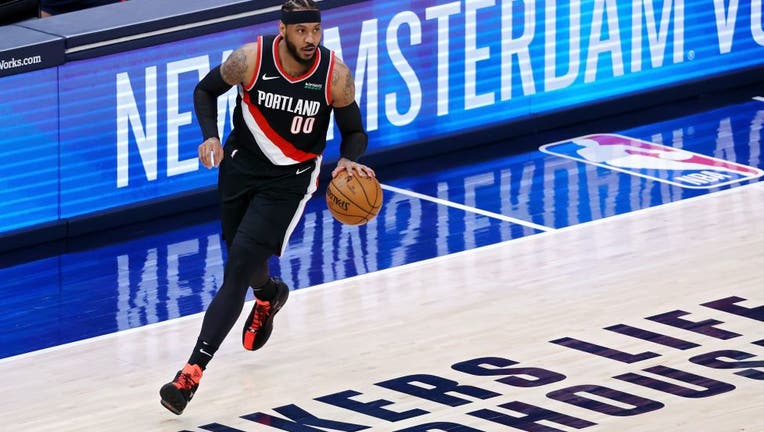 LOS ANGELES - It looks like Melo will be joining the Lake Show.

The Los Angeles Lakers continue to add veterans and All-Stars to its stacked roster for the upcoming season in their quest to win the franchise’s 18th NBA championship. If they win an 18th title, the Lakers would surpass Boston and will become the franchise to have won the most championships in NBA history.

Carmelo Anthony’s agent Bay Frazier confirmed to ESPN's NBA Insider Adrian Wojnarowski Tuesday the free agent agreed to a one-year deal with the men in gold and purple. He is signed with the Creative Artists Agency.

Anthony, who will be entering his 19th NBA season, also shared the news on social media.

Known as "Melo," by fans, not to be confused with Charlotte's LaMelo Ball, the forward was previously signed with the Portland Trail Blazers, playing alongside Damian Lillard and CJ McCollum. The franchise recently parted ways with Terry Stotts and signed Chauncey Billups as its new head coach. Billups served as an assistant coach for the Los Angeles Clippers for the 2020-21 NBA season.

The decorated All-Star was clearly ready to move on and likely sought the move he felt would best guarantee a championship ring.

This offseason, the Lakers front office has made it clear they do not plan to be eliminated from the first round of playoffs again. With a roster plagued by injuries, the Lakers were sent home packing early after they were defeated by the Phoenix Suns in the Western Conference quarterfinals. The Suns went on to the NBA Finals but were no match for Giannis Antetokounmpo and the Milwaukee Bucks.

He has proven he has plenty of gas left in the tank. He ranks second in points among active NBA players.

Kyle Kuzma, Alex Caruso, and Montrezl Harrell are just some of the players who will not be returning to the Lake Show.