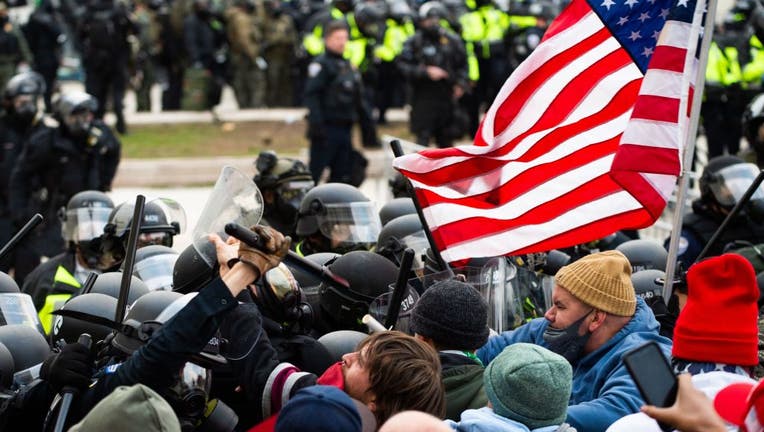 David Nicholas Dempsey, 34, of Van Nuys, and Jeffrey Scott Brown, 54, of Santa Ana, are charged with federal offenses related to their alleged assault and impediment of certain officers, according to the U.S. Attorney's Office for the District of Columbia.

Dempsey is charged with use of a dangerous weapon, obstruction of an official proceeding, and civil disorder in addition to assaulting, resisting or impeding certain officers. Brown is separately charged with inflicting bodily injury on officers, obstructing law enforcement during a civil disorder and engaging in physical violence in a restricted building or grounds, among other charges.

Both men made their initial court appearances Thursday in the Central District of California. It was not immediately known when they will be arraigned in the District of Columbia.

According to court documents, Dempsey was captured in numerous videos taken on the lower west terrace during the riots at the U.S. Capitol on Jan. 6. As depicted, Dempsey allegedly wore various outfits, but predominantly a black shirt, dark helmet, goggles and an American flag gaiter covering most of his face. He became known online as the #FlagGaiterCopHater, according to an FBI affidavit in the case.

In several still photos, he can be seen using various objects, including a crutch and a metal pole, as bludgeoning weapons or projectiles against the line of law enforcement officers protecting the tunnel in front of the west terrace entrance, prosecutors said.

Additional video footage appears to show Dempsey spraying officers with what is thought to be pepper spray.

He was seen in a YouTube video on the National Mall in the nation's capitol before the riot in front of a "wooden structure representing a gallows fitted out with a noose," according to the FBI. Dempsey is seen using crude language to denounce the Speaker of the House Nancy Pelosi and Rep. Jerry Nadler, saying, "They need to hang from these (expletive)" as he pointed to the gallows, the FBI alleged.

Demsey was also arrested in Santa Monica on Oct. 19, 2019, "for allegedly spraying anti-Trump protesters on the pier with bear spray," according to the FBI.

According to court documents, Brown was part of the crowd entering the tunnel at the lower west terrace. Video footage shows him reaching through the crowd towards another rioter, who provides him with a can of spray, prosecutors stated.

Brown can then be seen apparently pointing the can toward the police defensive line and deploying the spray for several seconds in the direction of the police. Brown also participated in the pushing action against officers who were attempting to restrict access to the U.S. Capitol, according to the U.S. Attorney's Office.

The cases are being prosecuted in the District of Columbia. Assistance was provided by the U.S. Attorney's Office for the Central District of California, officials said.

Both cases are being investigated by the FBI's Los Angeles Field Office, as well as the Metropolitan Police Department, with significant assistance provided by the U.S. Capitol Police and the FBI's Washington Field Office, which identified Dempsey as #399 and Brown as #172 in posted photos seeking information.

In the seven months since Jan. 6, more than 570 individuals have been arrested in nearly all 50 states for crimes related to the breach of the U.S. Capitol, including over 170 people charged with assaulting or impeding law enforcement. The investigation remains ongoing.