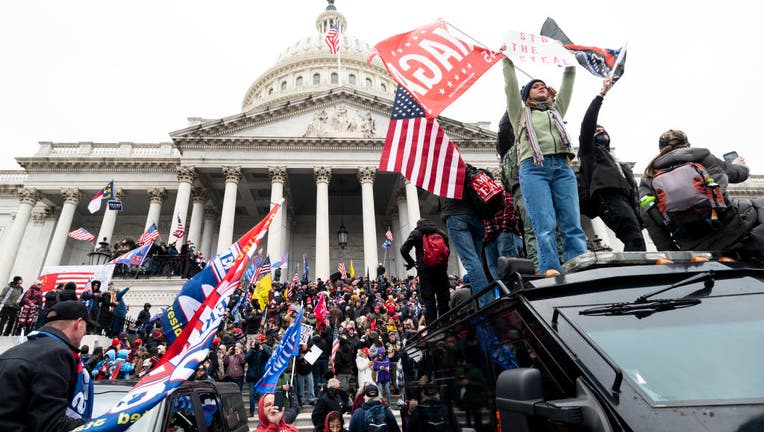 Trump supporters stand on the U.S. Capitol Police armored vehicle as others take over the steps of the Capitol on Wednesday, Jan. 6, 2021, as Congress works to certify the electoral college votes. (Photo By Bill Clark/CQ-Roll Call, Inc via Getty Imag

WASHINGTON - Just days after being exonerated in the death of Ashli Babbitt, the Capitol police officer spoke publicly for the first time about his experience during and since the Jan. 6 riot.

"I know that day I saved countless lives," Byrd said. "I know members of Congress, as well as my fellow officers and staff, were in jeopardy and in serious danger. And that’s my job."

Byrd said he and fellow officers barricaded the doors to protect more than 60 House members and staffers still inside the building. Once the doors were blocked, Byrd said everyone was essentially trapped.

With nowhere to go, Byrd could only listen to the chaos unfold and injuries being reported over his police radio.

"At that point is when I realized they’re here. The chants got louder. I couldn’t make out what they were saying, but it sounded like hundreds of people outside of that door," Byrd said.

The rioters eventually reached Byrd and other officers. Officials said Babbitt tried to break through a window, ignoring authorities’ pleas to stand down. At that point, Byrd said he felt he had no other option but to open fire.

"I tried to wait as long as I could," Byrd recalled. "I hoped and prayed no one tried to enter through those doors. But their failure to comply required me to take the appropriate action to save the lives of members of Congress and myself and my fellow officers."

Babbitt, a 14-year Air Force veteran from San Diego, was fatally struck in the shoulder as she tried to climb through a broken window of a door that led to the Speaker’s Lobby outside of the House chamber. She later died at a local hospital

The department declined to discipline Byrd and acknowledged he and his family have faced "numerous credible and specific threats."

"They talked about killing me, cutting off my head," Byrd said. "It’s all disheartening, because I know I was doing my job."

Babbitt’s husband Aaron told FOX News he has also faced death threats in the aftermath of the riots.

Byrd said he just hopes everyone understands he did his job.

"There was imminent threat and danger to the members of Congress," Byrd stressed. "I just want the truth to be told."

Babbit was one of five people who died during and after the riot, but she was the only one fatally shot by police. Three other Trump supporters died of medical emergencies.

Two police officers died by suicide in the days that followed. In the months since the attack, four Capitol officers committed suicide, Reuters reported.

Capitol Police Officer Brian Sicknick collapsed and later died after engaging with the protesters. A medical examiner determined he died of natural causes.