LOS ANGELES - A powerful double whammy of an atmospheric river and bomb cyclone continues to drench California Thursday, dropping several inches of rain on a region that has struggled to wring out from an onslaught of winter storms and creating a widespread risk of flooding, mudslides and power outages in what some forecasters are suggesting will become one of the most impactful storms to strike the state in years.

The storm has been blamed for at least two deaths in the San Francisco Bay Area. An infant was killed Wednesday inside a home that was hit by a falling redwood tree in the rural Sonoma County town of Occidental, according to local firefighters. No other details have been released.

In Fairfield, a 19-year-old woman was killed when her car hydroplaned on a partially flooded road and slammed into a utility pole, according to Fairfield Police.

Gov. Gavin Newsom declared a state of emergency in response to the severe winter storms in an effort to boost emergency response efforts and authorize the mobilization of the California National Guard for disaster response. It also directs Caltrans to request immediate assistance from the Federal Highway Administration to expedite road repairs due to the storms.

"California just hasn’t been used to this for probably the last 20 to 30 years," said fire captain Keith Wade. "We’re moving through; the big thing we’re doing with our equipment that we’re asking to come in, we have a swift water team that’s prepositioned here in the city of Sacramento."

Coordination efforts are underway by the state's emergency operations center to set up sandbagging locations and shelters, and deploy ambulance strike teams. "We anticipate this may be one of the most challenging storms in California," officials said.

Mandatory evacuations were ordered for several neighborhoods that face a high risk of flooding. Police across northern California continue to evacuate homes as more rain falls.

The storm underwent rapid development off the California coast over the past 36 hours, becoming what meteorologists refer to as a bomb cyclone. As the storm intensified, it tapped into abundant tropical moisture available in the Pacific Ocean, creating a reasonably strong "atmospheric river" carrying copious amounts of moisture from Hawaii to California.

This animation shows the rapid strengthening of a low-pressure system as it approaches the West Coast. This system has become what is known as a bomb cyclone. / FOX Weather

This specific type of atmospheric river, known as the "Pineapple Express" in a nod to the storm's fuel source due to its Hawaiian origins, is set to bring significant moisture to California. Think of this as a narrow pipeline of moisture that originates in the tropics.

Flood watches span much of the state, from near the Oregon-California border to just north of the Los Angeles area.

Of particular concern are the potential for debris and mudflows where heavy rain falls in areas burned by major wildfires in the state over the past few years.

Some areas along the Northern and Central California coast could see 5 to 8 inches of rain, while farther inland, rainfall totals in the mountains and their foothills could approach 8 to 12 inches in some spots.

The San Francisco Bay Area, which saw its second-wettest day on New Year's Eve, could see an additional 2 to 5 inches of rain with locally higher amounts. 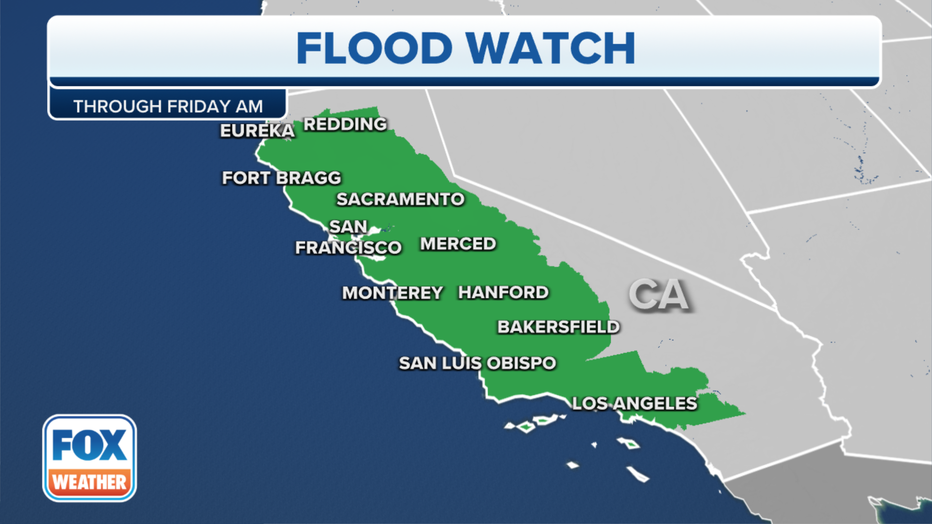 Even the Los Angeles area could have 2 to 4 inches of rain – with 4 to 8 inches of rain possible in the Southern California mountains – by the time the storm system moves through.

"We are seeing street flooding occurring on multiple streets throughout the City of Los Angeles," Los Angeles Police tweeted Thursday morning, adding the Sepulveda Basin had been shut down due to high water levels.

Since atmospheric rivers have been dropping near-record amounts of rain across California since before the Christmas holiday – as much as 5 to 12 inches – the additional water will have nowhere to go. As a result, numerous instances of flash flooding and mudslides are expected.

Considerable and life-threatening flooding is especially possible along the northern and central California coast. Rivers across the state are forecast to rise into flood stage.

Santa Cruz County, which sits along the central California coast, has already declared a local state of emergency before Wednesday's storm arrived as the county suffered more than $10 million in damage from last weekend's atmospheric river storm.

Meanwhile, the bomb cyclone will create a tremendous difference in pressure across regions, leading to widespread high-wind events that could last for several hours.

WHEN STORMS ‘BOMB OUT’: EXPLAINING HOW A BOMB CYCLONE FORMS

High Wind warnings span much of Central California into Thursday morning for gusts between 50 and 60 mph in the San Francisco Bay Area, 60- to 70-mph gusts in the Sacramento Valley and 65- to 70-mph gusts possible along the coastal and mountainous regions.  In Southern California, gusts from 50- to 70-mph are likely in the mountains and central coastal regions. 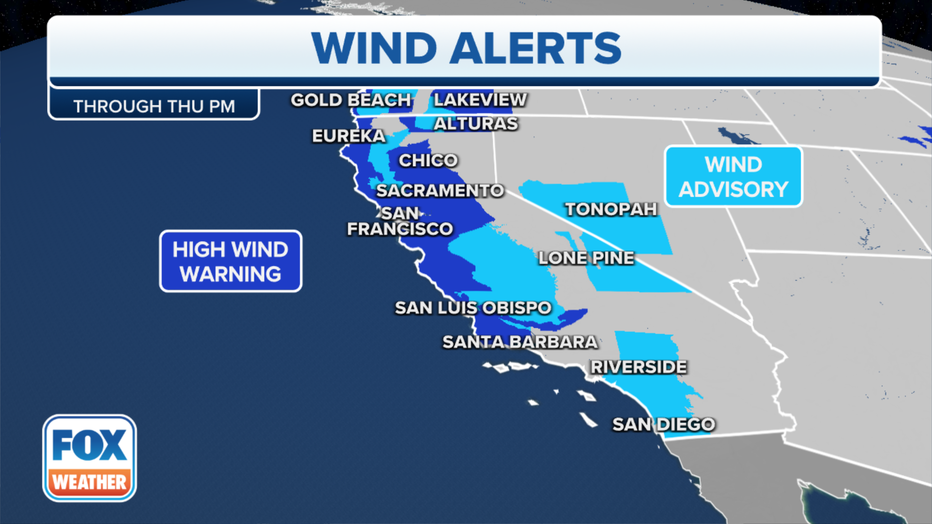 So far, Eureka recorded a gust of 66 mph, forcing the closure of an 18-mile stretch of Highway 101 in Humboldt County due to multiple downed trees.

California's State Route 1 was closed for a period Wednesday in Mendocino County south of Gallaway due to downed trees.

San Francisco reached a gust of 60 mph Wednesday evening while Oakland wasn't too far behind at 59 mph. But wind reports are coming in exceeding 100 mph in some mountainous areas.

Alpine Meadows in the Sierra Nevada hit a gust of 132 mph while a wind gust as high as 106 mph was recorded at the Grapevine Peak weather station in Kern County, according to the National Weather Service.

A few strong thunderstorms are possible in the region Wednesday night that could bring sudden localized damaging wind gusts.

As of Thursday morning, more than 180,000 customers in California were without power. The most widespread outages were reported in Northern and Central California, including parts of the San Francisco Bay Area. 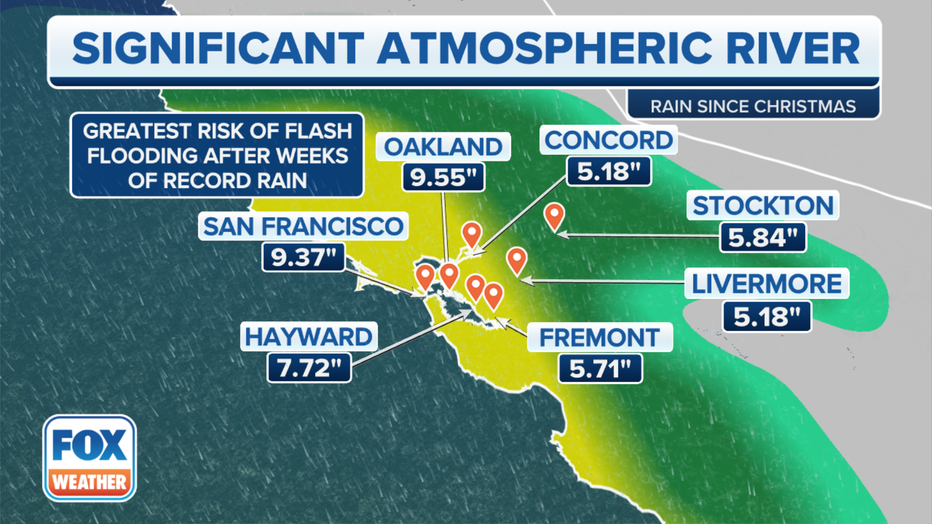 WHAT IS AN ATMOSPHERIC RIVER? EARTH'S LARGEST FRESHWATER RIVERS ARE IN THE SKY

The current storm combined with the saturated soils from previous storms has emergency officials bracing for widespread damage from flooding and mudslides.

National Weather Service forecasters in San Francisco were not mincing words about the upcoming threat.

"To put it simply, this will likely be one of the most impactful systems on a widespread scale that this meteorologist has seen in a long while," an NWS meteorologist in San Francisco wrote in a forecast discussion Monday evening. "The impacts will include widespread flooding, roads washing out, hillside collapsing, trees down (potentially full groves), widespread power outages, immediate disruption to commerce, and the worst of all, likely loss of human life. This is truly a brutal system that we are looking at and needs to be taken seriously."

In addition, forecasters are warning about coastal flooding along the San Francisco peninsula that would flood parking lots and coastal roads. 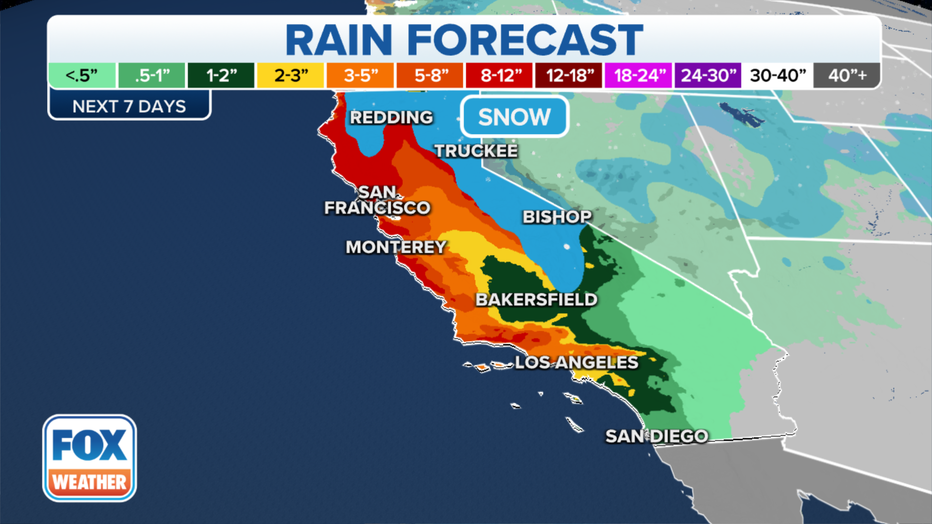 The rain forecast over the next seven days. / FOX Weather

While rain will fall at the lower elevations across the West, as you get higher in elevation, snow is expected.

Up in the mountains, dangerous travel conditions are developing and will continue through Thursday night as extremely heavy snow rates greater than 3 inches per hour are near certain above 5,000 feet.

This will lead to dangerous, if not impossible, travel conditions. In total, and additional 1-4 feet of snow is expected across the Sierra Nevada. In Southern California, the highest peaks of the mountains will pick up 1-2 feet. 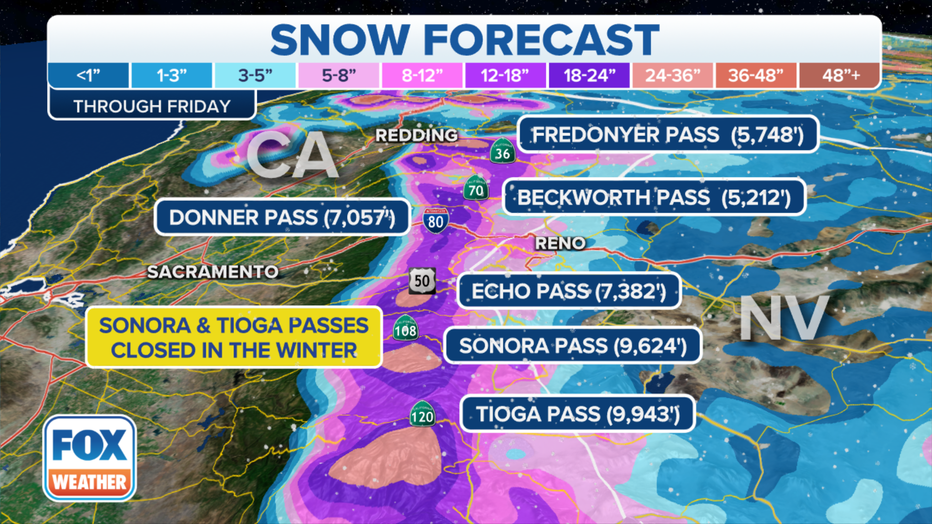 The snow forecast over the next seven days. / FOX Weather

Winter Storm Warnings are in effect across the Sierra Nevada for not only heavy snows, but damaging winds gusting to 55-70 mph along the higher peaks with gusts reaching 85 mph on the highest peaks.

This latest storm will eventually push through by late Thursday or early Friday, but there is scant hope for drier weather in the Golden State anytime soon.

Another atmospheric river will blast the state this weekend and then yet another powerful one is likely next Tuesday-Wednesday, according to the FOX Forecast Center. Each will bring a renewed round of dangerous flooding.

Over the next week, as much as 20 inches of rain may fall in the northern parts of the state. 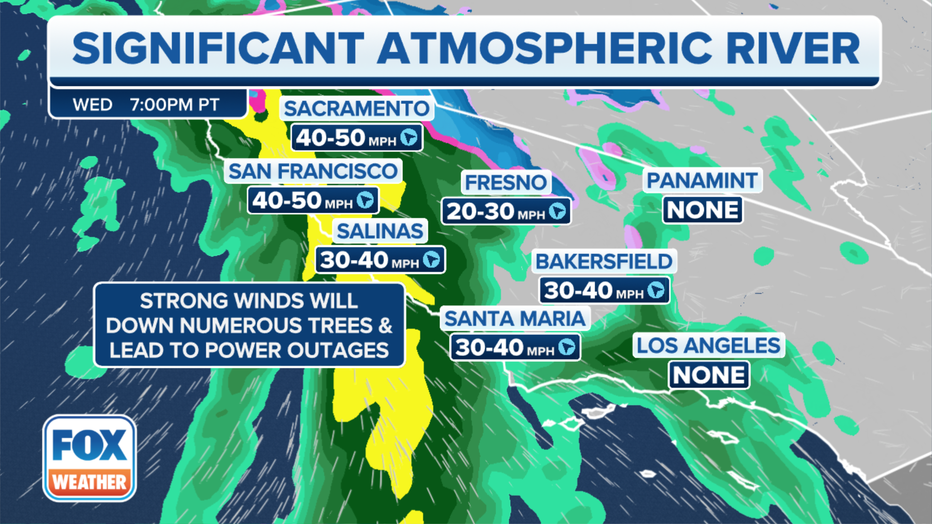 "The cumulative effect of the repeated rounds of moderate to heavy rain will lead to the potential for more widespread flooding with increasingly severe impacts," the National Weather Service in Sacramento said in their discussion Wednesday morning.

Fellow NWS meteorologists in San Francisco added in their forecast discussion: "The message to convey is resiliency as this is not a ‘one and done’ storm."

Several inches of rain in the forecast on top of what's already fallen this winter is surely appreciated in a region mired in a yearslong drought. While every drop helps, the area has a long way to go.

"At this point in time, we still have another four or five months in our snow season and in our typical rainy season," Andrew Schwartz, lead scientist at the Central Sierra Snow Lab, said last week. "That means that while we're kind of scoring the touchdown in the first quarter of the game. Right now, we still have three-quarters left, and there's a lot that can happen." 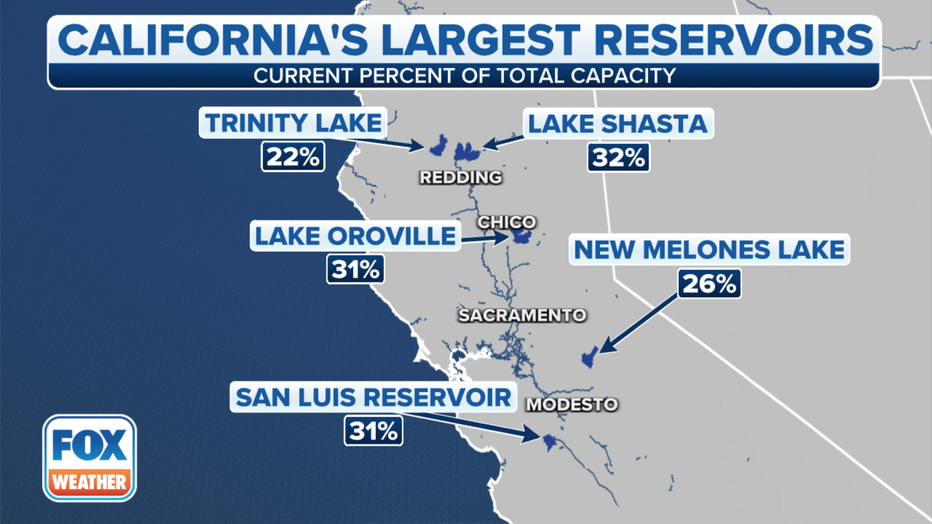 "But January through March kind of shut off, and we didn't see as much precipitation come through in that period as we would have wanted," he said.

Even an average snowfall season wouldn't be enough to get the region out of drought.

"At this point in time, we realistically need about an extra winter's worth of precipitation," Schwartz said. "So, it's not going to happen in one year. At minimum, we're probably looking at three to four of above average before we can really talk about getting out of the drought."

In an average season, the lab sees 30 feet of snow. An extra season's worth of snow would mean 60 feet in one year. He said it is a "high task to try to take on."

Get updates to this story from FOX Weather.