Authorities on Tuesday were conducting a mass sanitation effort at the Brentwood homeless encampment outside the VA hospital on San Vicente Blvd.

LOS ANGELES - Authorities on Tuesday were conducting a mass sanitation effort at the Brentwood homeless encampment outside the VA hospital on San Vicente Blvd.

Stu Mundel was over the scene from up in SkyFOX and saw crews using a front-loader to clear trash from the area. 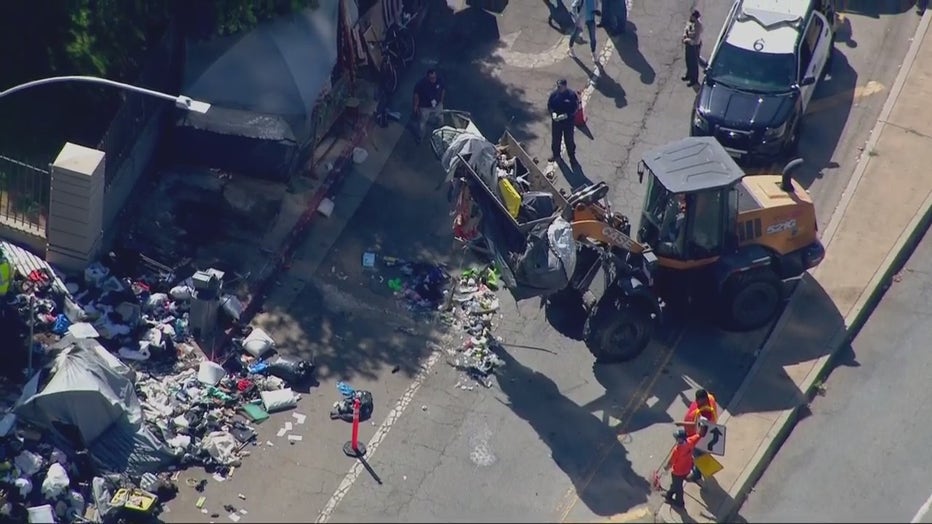 According to the office of Los Angeles County Supervisor Sheila Kuehl, the sanitation efforts are part of the county's outreach efforts to link people experiencing homelessness to more permanent housing.

There have been multiple crime reports related to the San Vicente encampment this year. Back in April, a homeless man was booked on murder and an assault with a deadly weapon charge after Los Angeles County deputies say he ran over another homeless man at the Brentwood encampment.

Crews on Tuesday were also working to clear out hundreds of unhoused people living in a homeless encampment in Azusa that lines the San Gabriel riverbed. Authorities said an estimated 300 people experiencing homelessness were living in tents or in their cars in the area.