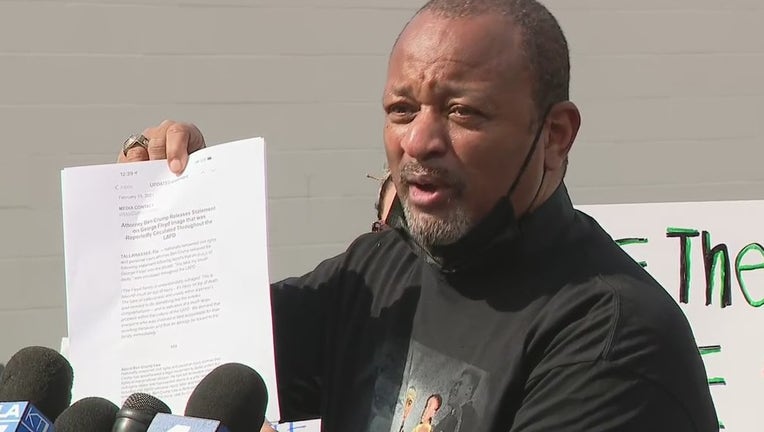 LOS ANGELES (CNS) - A coalition of community activists Monday is calling for the firing of any Los Angeles Police Department employee who created or circulated a Valentine-themed social media post featuring an image of George Floyd that allegedly included the words "You take my breath away."

The Los Angeles Police Department has launched an internal investigation after a photo allegedly began circulating around the department depicting the death of George Floyd.

Community activist Najee Ali said during the press conference late Monday morning that they’re "not here to condemn or attack LAPD" and that they "simply want to hold them accountable."

Ali is also a spokesman for Attorney Ben Crump who represents the Floyd family.

"Any LAPD employee mocking the death of George Floyd should be terminated immediately," Ali said.

The Floyd family, who is still grieving his death, is also asking that those involved be terminated.

"It’s scary knowing that we have racists that may come into our community are in charge of policing Black people," Ali said.

Floyd died May 25 after a Minneapolis police officer handcuffed him, pinned him to the ground and then knelt on his neck for more than eight minutes as he repeatedly said, "I can't breathe."

SUGGESTED: News related to the death of George Floyd

Ali said the photo scandal is painful and that Floyd's death still hurts.

Also on Monday, the Board of Directors for the LA Police Protective League issued the following statement:

"The Los Angeles Police Protective League repudiates this abhorrent image and anyone associated with its creation, dissemination, or passive observation of it. If that image was created, "liked," or shared by a member of the LAPD, the Chief of Police must act swiftly to hold those individuals accountable. There must be zero tolerance for this behavior in our profession, and any police officer who feels the need to be part of any online group that engages in, promotes, and/or celebrates this type of activity should quickly rethink their career choice because they clearly don't have the judgment, nor temperament, to be a member of law enforcement."

Los Angeles Police Department officials said they launched an internal investigation after an officer complained about the image and alleged it was being circulated within the department. The complaining officer was scheduled to be interviewed Monday, LAPD Chief Michel Moore said.

A coalition of community activists Monday&nbsp;will call for the firing of any Los Angeles Police Department employee who created or circulated a Valentine-themed social media post featuring an image of George Floyd.

The coalition of activists, headed by Project Islamic Hope, have scheduled an 11 a.m. news conference outside LAPD's Harbor Community Police Station to ask for a meeting with Moore, and to call for the termination of any LAPD (employee) who shared this image mocking Floyd's killing.

"It's despicable and outrageous that there are LAPD employees who are in the workplace mocking the police murder of George Floyd, who died in May after being handcuffed and pinned to the ground under the knee of Derek Chauvin, who was then a police officer in Minneapolis," said Najee Ali, director of Project Islamic Hope.

Reports of the image, and the subsequent complaint within the LAPD, first surfaced Friday, two dayS before Valentine's Day.

Screencaps of the image allegedly referred to in the internal LAPD complaint, and posted on Twitter and elsewhere, shows a picture of Floyd on a pink background surrounded by hearts with the words "You take my breath away" and Valentine-style spaces to designate who it is being sent "to" and "from."

It was unclear whether this is the same image that prompted the LAPD complaint.

The tweet continued: "A personnel complaint has been initiated and we are pursuing each allegation including interviewing the department member who brought it to our attention."

Video of Floyd pinned to the ground by Minneapolis police sparked weeks of nationwide protests.

RELATED: Hundreds of protesters gather in downtown LA to rally against death of George Floyd

A  county medical examiner later ruled his death was a homicide, saying Floyd died of "cardiopulmonary arrest." An independent autopsy determined he died of  "asphyxiation from sustained pressure."