6th Street Bridge reopens after yet another closure

The Los Angeles Police Department said the bridge has been plagued by illegal activity.

The closure on Tuesday night marked the fourth closure in five days on the newly-constructed, $588 million bridge, in an effort to crack down on the dangerous stunts and other illegal activity that has been occurring on the bridge.

The LAPD noted most of the illegal activity has been coming from tourists who are coming to LA to see the bridge.

"I came from Las Vegas with my family expecting to watch the new bridge because my daughter saw it on TikTok," a visitor told FOX 11’s Mario Ramirez.

The Sixth Street Viaduct opened on July 10 and since that time, it’s been plagued by illegal activity such as street takeovers, graffiti, crashes, and social media stunts.

Video on social media from last weekend showed drivers spinning their wheels and performing other antics on the bridge, leaving the pavement scarred. Some people even crawled onto the ribbon-like arches that line the bridge to get elevated views of the action.

Earlier Tuesday, LAPD Chief Michel Moore said speed bumps would be installed on the bridge to deter street takeovers, as well as a center median and fencing to discourage people from scaling the archways.

In the last four days, the LAPD has issued 57 citations and impounded six vehicles on the bridge.

The opening of the Sixth Street Viaduct marked a key milestone in a construction project that began in 2016 to replace a 1932-vintage structure. The original bridge was an iconic Los Angeles landmark, seen in movies including "Grease" and "Terminator 2: Judgment Day," but its aging structure was deteriorating, leaving it seismically unsound. 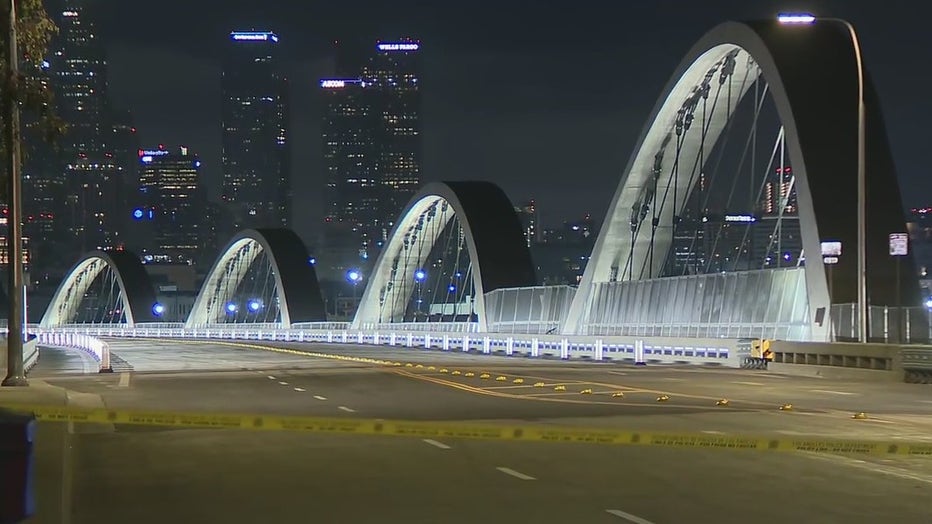 The city Bureau of Engineering's has said future plans call for the downtown side of the bridge to include a rain garden, a planted seating area, a play and performance lawn, a sculpture garden, a meadow, a dog play area, an adult fitness section, cafe and restrooms, a sloped river gateway, an urban forest and terraces.

On the Boyle Heights side, the park's plans include a skateboard area; a meadow; a picnic area; a synthetic turf soccer field; flexible courts sized for basketball, futsal and volleyball; a play and performance lawn; a children's play area; a promenade; a landscaped seating area; an adult fitness area; a rain garden; a dog play area and grilling spaces.