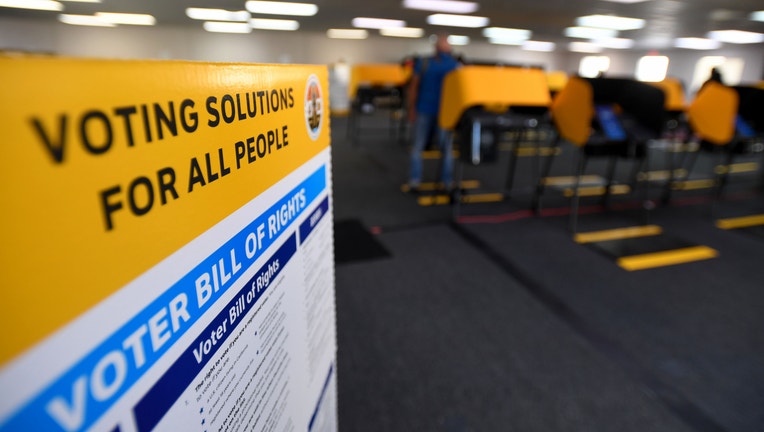 Voters cast their ballots in a trailer set up in the parking lot of SoFi Stadium in Inglewood on Friday, October 30, 2020. (Photo by Brittany Murray/MediaNews Group/Long Beach Press-Telegram via Getty Images)

LOS ANGELES - Turnout has been heavy during the early voting period as Californians cast ballots for president, the state Legislature, local offices and on a dozen statewide propositions. Here’s are five things to know about the Nov. 3 election:

A record 22 million people have registered to vote in California, and it’s widely expected the turnout for the election will hit another historic mark.

“It undeniably will be a record turnout, with more voters casting ballots than in any election in California history,” said Paul Mitchell of Political Data Inc., a nonpartisan research firm.

About 14.6 million votes were cast in the 2016 presidential election in the state. By Monday, more than 11 million people already had returned their ballots.

While the total number of people casting votes appears head for a milestone, another record is unlikely to fall: the percentage of registered voters who cast ballots. That mark is 88.4% and was set when Democrat Lyndon Johnson defeated Republican Barry Goldwater in 1964.

A RECORD LOSS FOR PRESIDENT TRUMP?

Everyone knows heavily Democratic California and President Donald Trump don’t mix well. The nation’s most populous state is the home of the so-called Trump resistance, and he lost California by more than 4 million votes to Hillary Clinton in 2016.

The contest Tuesday will be decided in battlegrounds like Wisconsin and Pennsylvania — the most interesting question in California might be the size of Trump’s expected defeat.

A recent Berkeley IGS Poll found Biden holding a 36-point lead over the president in the state. If that comes to pass on Election Day, it would be the largest victory margin in a California presidential election since 1920, when Republican Warren Harding defeated Democrat James Cox by 42 percentage points, as well as the largest Democratic victory in California history, poll director Mark DiCamillo said.

FEARS OF UNREST AT POLLS

The election arrives with America deeply divided by politics. In a memo in early October, California warned local officials to prepare for disruption at polling places and potential cases of voters being intimidated or blocked from casting ballots.

The Sacramento Police Department will have officers available in case of any disturbances that might happen in connection with the election. The Mendocino County Sheriff’s Office said it will provide extra patrols at polling locations. In the San Francisco Bay Area and Los Angeles and surrounding communities, governments and businesses boarded up windows and had emergency plans ready in case of violent protests.

California Secretary of State Alex Padilla, a Democrat, has said he expects a safe election but has urged the state’s 58 counties to be ready for potential trouble, including efforts to threaten or harass voters.

There are 5.3 million registered Republicans in California, but the party has been in a tailspin for years.

Democrats hold every statewide office, dominate the Legislature and congressional delegation and outnumber Republican voters nearly 2-to-1. Even Orange County, once a nationally recognized Republican stronghold known as “Reagan Country” has a Democratic registration edge.

Could 2020 turn things around?

It will be a challenge with Trump leading the ticket He is broadly unpopular outside his base. But Republicans hope to claw back at least some of seven U.S. House seats the party lost in 2018, including four wholly or partly in Orange County.

And there are a list of ballot proposals involving property taxes, affirmative action and criminal punishments that, depending on the outcome, could show the state isn’t the one-dimensional, liberal bastion often portrayed.

Some of the harshest critics of District Attorney Jackie Lacey, the first Black woman to run the nation’s largest local prosecutor’s office, come from the Black Lives Matter movement, who have assailed her for failing to prosecute police involved in fatal shootings.

Her opponent, George Gascon, who is Hispanic, is a former police chief and San Francisco district attorney who is loathed by police unions because of his strong support for criminal justice reforms.

The race has become a showcase for progressives trying to reshape criminal justice, in this case within the nation’s largest county, home to 10 million people.

Gascon’s financial supporters include billionaire George Soros and Netflix CEO Reed Hastings, while most of Lacey’s funding has come from law enforcement groups.