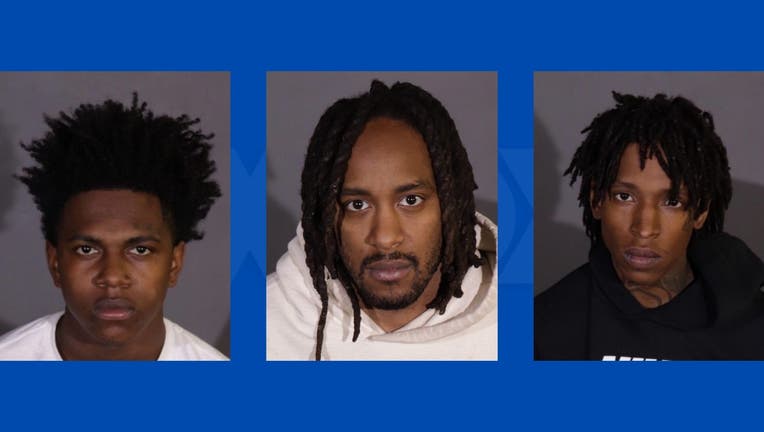 LOS ANGELES - Three men are facing charges stemming from a string of follow home robberies dating back to at least early January of this year, according to the Los Angeles Police Department.

Matthew Adams, Eric Wilson and Jayon Sparks have been charged in relation to multiple crimes dating back to Jan. 7, 2022. There arrests were made by a follow home robbery task force created in November of last year. While the three men were identified in multiple robberies, according to police, there are several suspects who have yet to be identified.

The first crimes occurred on Jan. 7. In one instance, police say a man was followed to his home in Hollywood. When he got out of his car, police say he was approached by three unidentified suspects and robbed at gunpoint. That same night, a couple was followed home from dinner, when police say they saw a car follow them into their parking garage. The couple got into the elevator where LAPD says they were confronted by Adams and one other suspect. Police say that while the unidentified suspect held the couple at gunpoint, Adams took one of the victim's watch, wallet and phone.

On Jan. 14, two victims visiting Los Angeles from out of the country were heading back to their hotel from a nightclub, when they were allegedly held up by Adams and another suspect. The two made off with a high-end watch and other personal items.

On Jan. 20, another couple of men were getting food on Sunset Boulevard in Hollywood. Police say that when one of the men got out of their car, Adams, Sparks and as many as five other unidentified suspects. Adams, Sparks and the others allegedly held the two men at gunpoint before taking a watch, jewelry, cash, and a purse from the victims. Police say the suspects fled in separate cars.

The final robbery happened on March 30, according to police, when Adams and one other man approached two UCLA students on Bentley Avenue in West Los Angeles shortly before 2:30 a.m. One of the students was allegedly hit over the head with a gun, as the suspects took two high-end watches and an iPhone, totaling $145,000.

Sparks and Wilson were arrested on March 24, after police found guns in their car during a traffic stop. A warrant was then served at their apartment, where police say they found more weapons and items identified in some of the robberies.

According to LA County DA George Gascón, Adams was released on his own recognizance in the prior two occasions because those cases involved gun possession, which is currently a zero-bail offense. The DA's Office added that it filed gun enhancements along with seven counts of robbery on Monday.

Gascón has been criticized for policies that many see as favoring criminals over victims, but he has repeatedly defended his policies, saying his stances were well-known during his 2020 campaign and his election signified public support for his reform agenda.

LAPD continues to investigate these robberies. Anyone with information is asked to call the Follow Home Robbery Taskforce at (213) 486-6840.