The Issue Is: Maria Shriver and Patrick Schwarzenegger

To discuss those, and more, Elex Michaelson is joined by journalist, author, philanthropist, and former First Lady of California, Maria Shriver, and her son, actor and entrepreneur, Patrick Schwarzenegger. 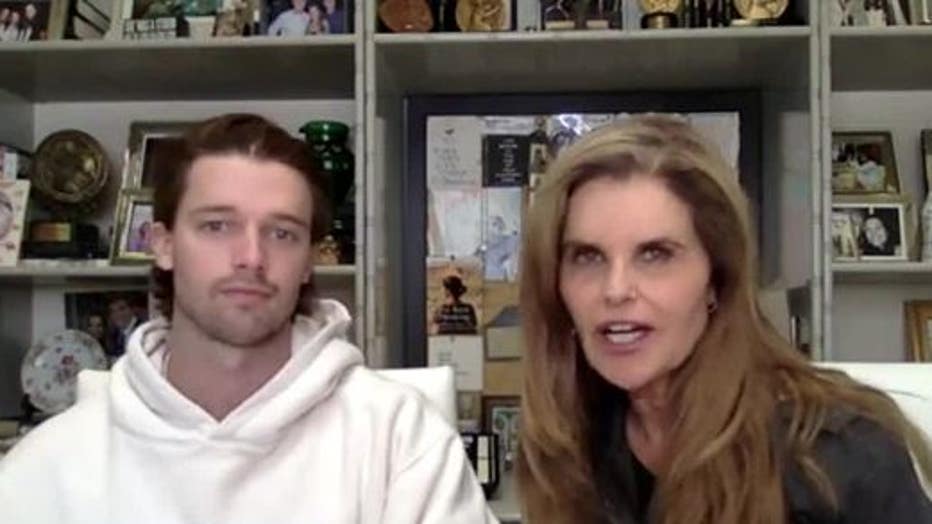 As millions of Americans sat down to a coronavirus-induced, scaled-back Thanksgiving dinner, the conversation kicked off with a conversation about the importance of gratitude, especially during a pandemic that has led millions to re-evaluate what’s most important in their lives.

“I have a gratitude practice, actually, that gets me through every week,” Shriver revealed to Michaelson. “Every morning, I wake up, and expressing gratitude is the first thing I do… I give thanks that I actually open my eyes, I give thanks to God for allowing my feet to touch the floor, and when I go downstairs and make my coffee, I actually sit down and kind of think about my life and think about everything that I’m grateful for.”

Schwarzenegger echoed his mother’s sentiments, noting that especially during a time like this, where businesses and individuals all across the nation, and world, are struggling, it’s important to find things to be grateful for.

“The fact that I’m healthy, and my mom, and my dad, and siblings are healthy, I think that’s probably the top thing I’m always grateful for, especially right now,” he said, adding that he’s also grateful that during this Thanksgiving season, he’s "getting to be with my family, getting to still have food, and be at a dinner table with each other.”

It is powerful ideas like gratitude that Shriver regularly pursues in greater detail in The Sunday Paper, her digital newsletter that aims to “move humanity forward one story, one person, at a time.”

The newsletter can be found at MariaShriver.com.

“The Sunday Paper has really been a labor of love,” Shriver said, noting the newsletter has a reader base in the millions. “It’s a safe place, it has news and views curated to kind of rise above the noise, its focus is to inspire you, to help you move forward in your life.”

Shriver said the newsletter, in exploring issues that comprise a meaningful life, is also meant to reassure readers that things are “going to be okay,” especially during a time in which she says many claim it’s “the worst it’s ever been.”

While Shriver promoted her newsletter, Schwarzenegger, following in his father’s footsteps, had a project of his own, the new film Echo Boomers, a crime-drama co-starring Michael Shannon and Alex Pettyfer.

“It was a really amazing experience to film that movie,” Schwarzenegger said. “It has a lot of political commentary throughout the film, and commentary about society and the economic divisions, so I think it was pretty relevant to what was happening today.”

Shriver added that, at this moment in time, the film’s message resonates even beyond the economic strife of those recently out of college, as the coronavirus pandemic has created even more economic divisions in society, where those who used to volunteer their time and resources are now finding themselves in long lines, needing help themselves.

Despite the strife and hardship brought about by the pandemic, Michaelson pointed to one bright spot for the Shriver-Schwarzenegger family in 2020, the birth of Shriver’s first grandchild.

“I have my own little private thing going on with my granddaughter,” Shriver revealed. “We have our own conversation, our own language, I have my own name… I just am beside myself about it.”

“Your dad and I were talking about that the other day,” Shriver told her son, referencing Patrick’s father Arnold Schwarzenegger. “We just can’t believe, you know, that our oldest daughter has a baby, it’s wild, and that we’re both able to see that, it’s a gift, it’s a blessing.”

From current family events, the conversation next turned to the legacy of the Shriver family, particularly Maria’s parents, Sargent Shriver and Eunice Kennedy Shriver, driving forces behind the Peace Corps and Special Olympics, respectively.

Following Sargent Shriver’s Alzheimer’s diagnosis, Maria Shriver founded The Women's Alzheimer's Movement, which, like many nonprofits, is in need of serious support during this pandemic.

“You just have to stay the course, you just have to stay working,” Shriver said, noting that she had just submitted a report to current Governor Gavin Newsom about how the state, with its aging population, can better handle the incoming “Alzheimer’s tsunami.”

Despite her emphasis that the Alzheimer’s crisis is here to stay, Shriver said she is hopeful about the future, especially as President-Elect Joe Biden is set to take office, as she said he believes in the data, research, and “helping this issue.”

Speaking more of legacy, Michaelson asked Schwarzenegger about the impact that his grandmother, Eunice Kennedy Shriver, has had on shaping him and his perspective of service.

“One of the beautiful things about my grandmother was kind of her determination to see the long haul,” Schwarzenegger said. “She had a very clear mindset of where she wanted to go with [The Special Olympics], and to give them the acknowledgement that they deserved.”

To button up the conversation, Shriver said that the work of her parents, and her uncle, the late Senator Ted Kennedy, prove that no matter the cause, most efforts don’t come to fruition overnight, but take time, maybe decades, proving “you’ve just got to stay at it.”

The special conversation with Shriver and Schwarzenegger ended with some fun and games.

First, a round of Personal Issues with Schwarzenegger.

Over the course of thirty seconds, Schwarzenegger revealed that his favorite athlete is Kobe Bryant, his favorite alcoholic drink is tequila, his favorite musical artist is Kanye West, and his role model is his “mama.”

When asked by Michaelson what his favorite thing was about being a Californian is, Schwarzenegger, whose father Arnold Schwarzenegger was the state’s Governor from 2003-2011, joked it was “the taxes, man.”

Finally, a round of the The Name Game, a word association game, in which Shriver was asked to say the first thing that came to mind about each of her children.

Shriver answered that eldest daughter Katherine was “loving,” second-born Christina was “kind” and “caring,” Patrick was “sweet, loving, funny,” and that her youngest son Christopher was “empathetic.”

Michaelson also asked for her thoughts on son-in-law Chris Pratt, who Shriver said was “sweet,” and “kind,” that “he loves his wife and his family,” and that he was “a good man.”