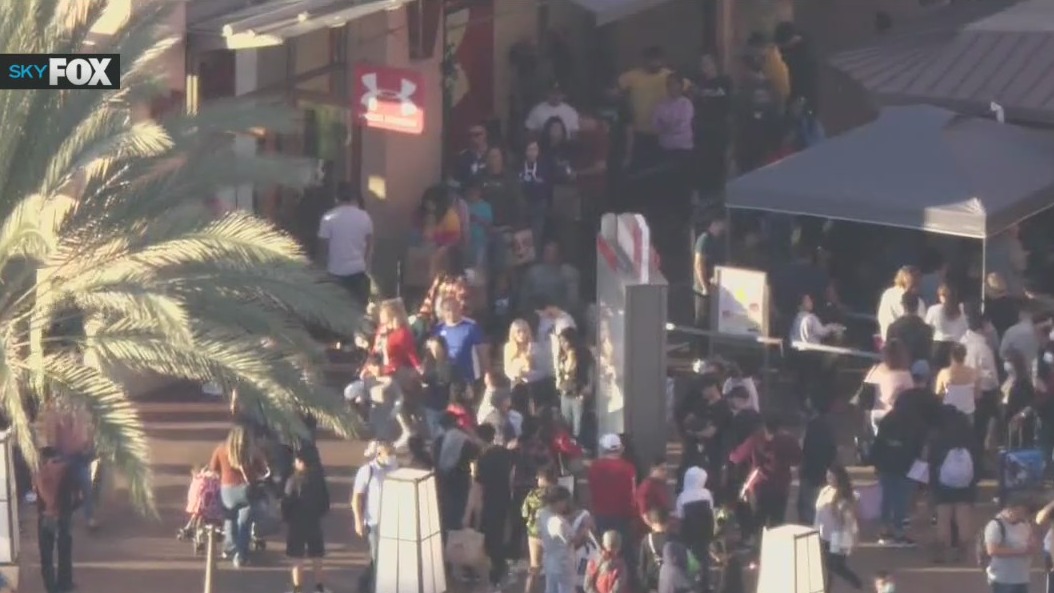 FOX 11's Chelsea Edwards was at the Citadel Outlets to catch some of the Black Friday buzz.

Some shoppers stayed overnight to ensure a good spot in line as they seek deep discounts.

It is unknown if the fliers were distributed by a sweet-toothed child. However, some families are not taking these "mandatory" Halloween trick-or-treat demands lightly. In fact, some found the act annoying.

A man in his 20s was found shot dead Sunday morning in Commerce, authorities said.

An armed suspect has been taken into custody following a barricade situation at a hotel in Commerce, officials said.

No injuries were reported in the incident.

Authorities believe hostages are being held against their will.

Hostages are reportedly being held against their will.

Police pronounced the two men dead Monday morning, and have not released any info on a suspect.

A man was killed in a gunfight in the unincorporated Commerce area, and his killer was being sought Monday, authorities said.

Two armed men were taken into custody Monday after barricading themselves in a building in Commerce and causing surrounding homes to be evacuated as a precaution.

The crowds showed up in hundreds at the popular Citadel Outlets in the City of Commerce.

Officials say one of two suspects was killed and a deputy was injured in Commerce early Friday morning after a gas station attendant called authorities and reported a man was attempting to set a gasoline pump on fire.

A suspected carjacker is in custody after leading police on a chase across Los Angeles Monday night.

A police chase suspect is in custody after a flatbed truck driver cornered them in the middle of a pursuit.

A police chase suspect is in custody after a flatbed truck driver cornered them in the middle of the pursuit.

Another shooting on a SoCal freeway. And CHP says it was road rage related. Authorities tell FOX 11 on Saturday night the shooting is not connected with the rash of BB gun shootings on our local freeways.

Both directions of the 5 freeway in Commerce have reopened after being shut down Wednesday afternoon due to police activity.