LOS ANGELES - It appears Sean McVay has made a decision on his future. 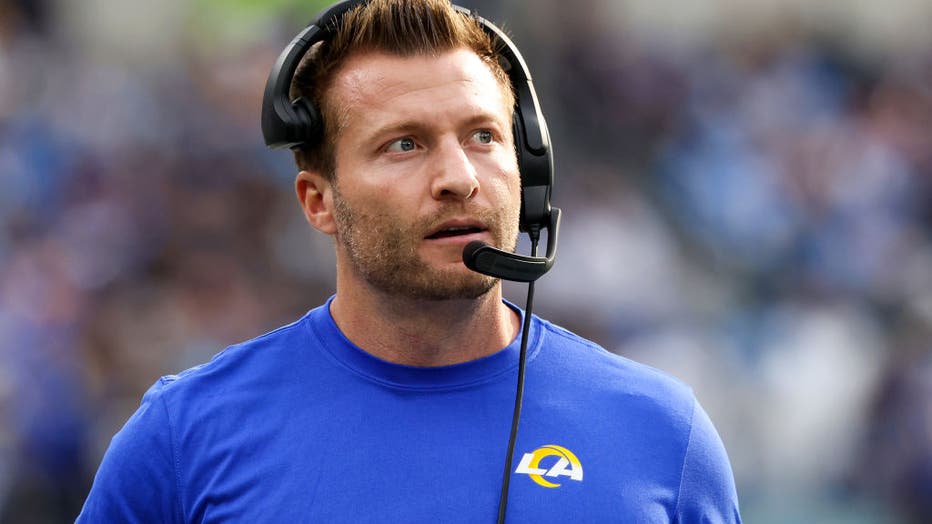 The Los Angeles Rams confirmed Friday afternoon that Sean McVay will resume his role as head coach for the 2023 season.

His decision comes after a disastrous 2022 NFL season in which the Rams went 5-12 and failed to even contend for a playoff spot. It was quite a drastic change for the Rams who, almost a year ago, won the Super Bowl on their home turf at SoFi Stadium against the Cincinnati Bengals.

Earlier this week, McVay said he would take an undetermined amount of time to contemplate his future before he commits to a seventh season with the Rams. On. Monday, it was clear he was strongly considering walking away from his remarkable head coaching career at its lowest point.

On Monday, The NFL’s youngest head coach for the past six years sounded genuinely conflicted about whether to step away from the relentless coaching grind that he admits is made worse by his controlling work habits and inability to delegate. While he said he is definitely not finished with coaching, the youngest coach to win a Super Bowl has been fantasizing about an extended break for a few years now.

"Tom Brady had a quote before about (how) he hopes that his kids can find something that they’re as passionate about as he is about football, but he wouldn’t wish that torment on anybody else, and I can really relate to that," McVay said.

McVay’s future surprisingly has become the top concern for the injury-riddled Rams, who lost nine of their final 11 games to miss the playoffs a year after winning it all at their home stadium. The offseason rebuild can’t start in earnest before general manager Les Snead knows who will be coaching those players — and if McVay leaves, it could be a wholly new staff in charge.

McVay all but said his first instinct was to resign in recent weeks, but he is taking time to reconsider and to discuss new ways forward with the Rams’ top brass, his coaching friends, his parents and his wife, Veronika.

"I’m a very impulsive person, and patience is not something that I do have," McVay said. "And so (I) probably want to adjust the approach that I’m typically accustomed to taking, especially as it relates to a decision of this magnitude."

He has spoken repeatedly about the exhaustion and frustration of this difficult season being compounded by the mental stresses of his grandfather’s death and worrying about his wife’s family in Ukraine. He also hasn’t hidden his interest in a cushy broadcasting career, although those rumors aren’t nearly as prominent as they were last year.

McVay’s contemplation leaves his players in limbo, but no cracks have appeared in the construction of a locker room that remained remarkably calm and together. All players who spoke about McVay while cleaning out lockers Monday said they respect whatever decision he makes, but they also hope he won’t give up on them.

"We envisioned this season going way different than where we sit now," linebacker Leonard Floyd said. "Kind of makes me mad, but it also adds fuel to my engine to train this offseason, get even better and come back next year to fight the good fight and win another Super Bowl."

If McVay returns, he’ll have quarterback Matthew Stafford and Super Bowl MVP Cooper Kupp back in the fold. Both stars have been injured and out since November, but Stafford confirmed Monday he’s returning for 2023 after sitting out the final seven games with a bruised spinal cord.

"I’m heading into the offseason with a chance to feel pretty darn healthy," Stafford said. "I’ll try to feel as good as I can feel and get ready to go again next year."

Stafford said he hasn’t seriously considered retirement. He also said he’ll be back with the Rams with or without McVay, although he definitely hopes his coach and friend returns.

The Rams also don’t know what the future holds for seven-time All-Pro defensive tackle Aaron Donald, who missed the first six games of his NFL career due to injury to close the season.

Donald hasn’t been on the sidelines with his teammates for games, although he is around the training complex regularly. He hasn’t said publicly whether he’s again giving serious thought to retirement, as he did last offseason.

Donald will be 32 in the fall, but his absence could force the Rams to rethink their entire defensive strategy. If he returns to fulfill another year of the richest contract in NFL history for a defensive player, the Rams will breathe much easier.

No matter who is coaching the Rams next season, rebuilding the offensive line must be a top priority. Los Angeles used 15 players on its line this season thanks to a crushing series of injuries that started in the preseason with top draft pick Logan Bruss. Every position must be reevaluated, since the line didn’t look elite even before it was devastated by injury.

After McVay decides, the Rams must be aggressive and resourceful this season to rebuild the roster depth beneath their still-bright stars. Los Angeles’ sixth overall pick in the upcoming draft belongs to Detroit, so Snead will get to work with the 37th overall pick and their original third-round pick. Whether he uses the picks or trades them, Snead must upgrade on both lines, the secondary and likely the receiving corps.