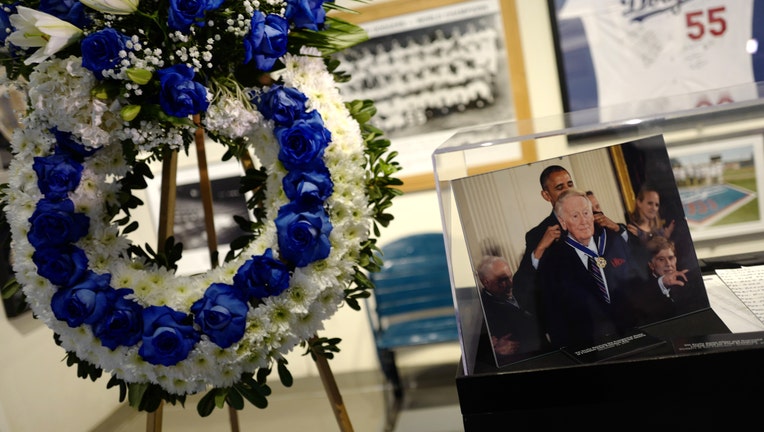 LOS ANGELES - Three days after more than 52,000 people packed Dodger Stadium to say goodbye to Vin Scully during an emotional pregame ceremony, a private funeral was held Monday for the beloved longtime broadcaster.

The Dodgers confirmed the private ceremony was held Monday morning, but provided no other details.

Scully -- who broadcast Dodger games on radio and television for 67 years, going back to the team's days in Brooklyn -- died last Tuesday at the age of 94.

During Friday's Dodger Stadium salute -- held prior to the team's first home game following his death -- the  Dodgers and San Diego Padres were lined up along the third- and first-base lines for a moment of silence followed by a tribute video played on the stadium's message board.

The Dodgers honored Vin Scully with a "We'll Miss You" sign right in front of the stadium's broadcast booth. The gesture comes in response to Scully displaying an "I'll Miss You" banner in his final year of broadcasting Dodger games.

The entire Dodger team then huddled around the mound, watching another tribute video to Scully that included photos with some current and former Dodgers players and broadcasters.

Manager Dave Roberts then addressed the sellout crowd announced at 52,714.

"Vin, as he's looking down on us right now, hated the spotlight on him. This is going to be very uncomfortable for him because this moment right now he really deserved," Roberts said. "Vin was a man of character, integrity, class, a true gentleman. He just wasn't a Dodger. He loved the game of baseball that we all love and care about."

"Vin, you will be missed," Roberts told the crowd. "We love you. We'll think about you every day. Every day we come here, every fan that shows up to Dodger Stadium, you'll always be remembered, you'll always be linked to these five words, "It's time for Dodger baseball."

Roberts then exhorted the crowd to get on their feet and "on the count of three, yell as loud as you can, `It's time for Dodger baseball"' so Mr. Vin can hear us from blue heaven.

That was Scully's signature call. He retired following the 2016 season.