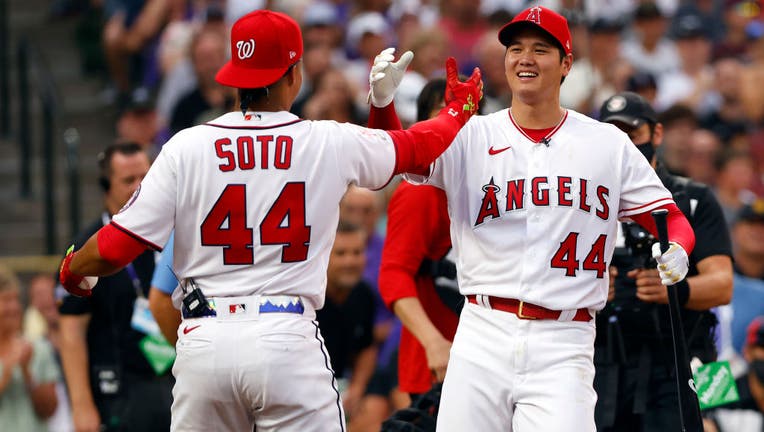 DENVER, Colo. (KTTV) - Los Angeles Angels star Shohei Ohtani got bounced in the first round of the 2021 MLB Home Run Derby after losing in a swingoff to Washington Nationals star Juan Soto.

Although "Showtime" lasted only a single round Monday night, the fans were treated to an epic "sho-down" between the Angels two-way sensation and the Nats slugger.

The two sluggers ended the first round in a tie with 22 home runs, forcing a one-minute swingoff. Soto slugged six more homers in the swingoff to increase his Round 1 total to 28, only to have Ohtani match his tally.

The round extended to a three-swing tiebreaker, with Soto converting all three swings into home runs. Ohtani lost the round in his first swing, pulling a hard grounder toward the first baseline.

Ohtani, who batted last between the eight derby contestants, appeared exhausted in both swingoffs. The 27-year-old Japanese slugger had his hands on his knees between breaks before conceding to the Nats' "Childish Bambino" following the second tiebreaker.

While Ohtani's exit was much earlier than most fans had anticipated, "Showtime" made history by becoming the first Japanese-born hitter to compete in the derby. On Tuesday, Ohtani will also become the first derby participant to start the All-Star Game as a pitcher, according to the starting lineup unveiled by Tampa Bay Rays and Amerian League manager Kevin Cash.

Ohtani's translator Ippei Mizuhara was the Angels star's catcher in the derby. While diehard Halos fans know Mizuhara for his hairstyle and even-keeled demeanor, Mizuhara's presence initially drew the ire of sports TV personality Stephen A. Smith, who argued that Ohtani's use of translators hurt baseball.

"But the fact that you got a foreign player that doesn’t speak English, that needs an interpreter … believe it or not, I think contributes to harming the game in some degree when that’s your box office appeal. It needs to be somebody like Bryce Harper, Mike Trout, those guys. And unfortunately, at this moment in time, that’s not the case," ESPN's Smith said before issuing an apology on social media.