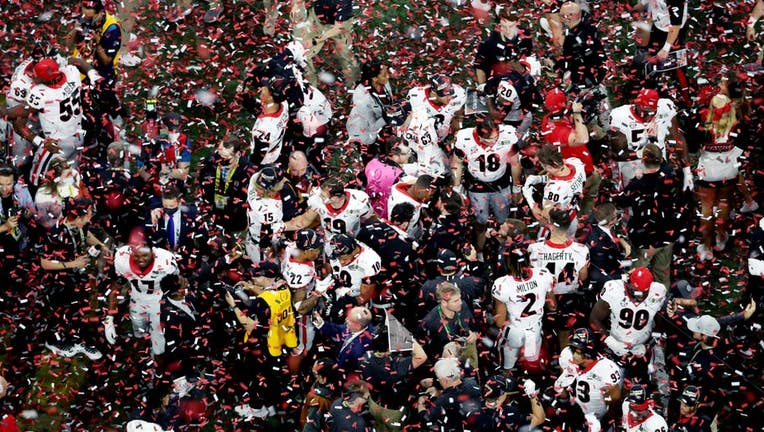 INDIANAPOLIS, Ind. - Georgia has ended its four-decade dough as National Champions after a tough defensive battle against Alabama on Monday. The Bulldogs beat the Crimson Tide 33-18.

The game was defined by two powerhouse defenses. No. 1 Alabama leads No. 3 Georgia 9-6 at halftime of the CFP championship game as each struggled to take it into the end zone.

The Crimson Tide lost top receiver Jameson Williams after he hurt his left knee in the first half at the end of a 40-yard catch. It was a non-contact injury. The All-American, a transfer from Ohio State, returned to the sideline in street clothes midway through the third quarter. He had four catches for 65 yards. Coach Nick Saban told ESPN at halftime that young receivers would have to step up.

"They've got talent. So they've got to play with competitive character and have a chance to make some plays. They're capable," Saban said. "They don't have the experience, but they're going to get it tonight."

We've got to settle down," he said. "We haven't had probably one drive where we didn't have negative yards starting where we had to back up."

Georgia got an incredible break when Payton Bowles blocked an Alabama field goal attempt and took over possession.

The game opened up from there with Georgia breaking the touchdown drought after five field goals between the two Southeastern Conference rivals. A 67-year-old run by James Cook set up Zamir White’s 1-yard score that put the Bulldogs ahead of Alabama 13-9 with 1:20 left in the third quarter.

Alabama was able to respond and regain the lead thanks to a nonchalant-looking fumble recovery and Bryce Young's short touchdown pass to Cameron Latu.

Young's 3-yard scoring pass gave the Crimson Tide an 18-13 lead with 10:14 left against Georgia. Young was tackled behind the line on a 2-point attempt.

The score was set up when Georgia quarterback Stetson Bennett lost the ball while Christian Harris was dragging him to the turf. Bennett was trying to throw the ball, but it appeared to come out before his arm moved forward and it was ruled a fumble on the field. Replay upheld the call.

Alabama safety Brian Branch almost casually collected the ball as he was headed out of bounds, getting one foot in bounds.

The Bulldogs responded with their most pass-happy drive of the game. Jermaine Burton had a 10-yard catch to open the drive before drawing a pass-interference penalty.

Bennett was sacked but answered quickly with the scoring pass to Mitchell, a freshman.

Georgia's James Cook was stopped on the 2-point run.

Georgia then ran away with it beating Alabama.