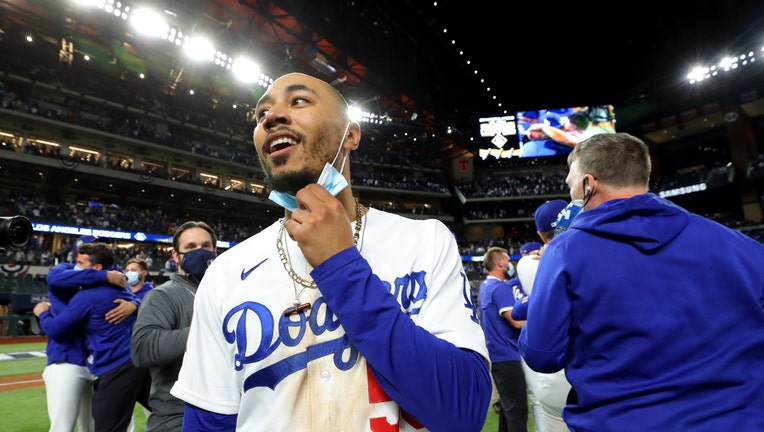 ARLINGTON, TX - OCTOBER 27: Mookie Betts #50 of the Los Angeles Dodgers celebrates with teammates on the field after defeating the Tampa Bay Rays in Game 6 to clinch the 2020 World Series at Globe Life Field on Tuesday, October 27, 2020 in Arlington,

Since landing the former American League MVP from the Boston Red Sox via trade, Betts not only lived up to his reputation as a five-tool superstar, but the 28-year-old outfielder also helped break the Dodgers' 32-year World Series championship drought in October.

Now, coming off a magical 2020 MLB season, Betts was named a finalist for the National League Most Valuable Player. The Nashville native joins Atlanta Braves first baseman Freddie Freeman and San Diego Padres shortstop (and ex-Dodger) Manny Machado as finalists for the award.

During the pandemic-shortened 2020 season, Betts hit 16 home runs and stole 10 bases with a batting average of .292 in 55 regular-season games.

Monday night's announcement comes a year after Betts' teammate Cody Bellinger won the NL MVP. Prior to 2019, the last Dodger to win the NL MVP was Clayton Kershaw, who finally exorcised his postseason demons in the 2020 World Series title run.

The NL MVP winner will be announced Thursday, November 12.