Dodger fans celebrate on the streets of Echo Park

Dodger fans celebrate on the streets of Echo Park after the boys in blue win the World Series!

Crowds in the street could be heard screaming and cheering as cars honked their horns. Dozens of people were on sidewalks celebrating at the intersection of Sunset Boulevard and Logan Street. 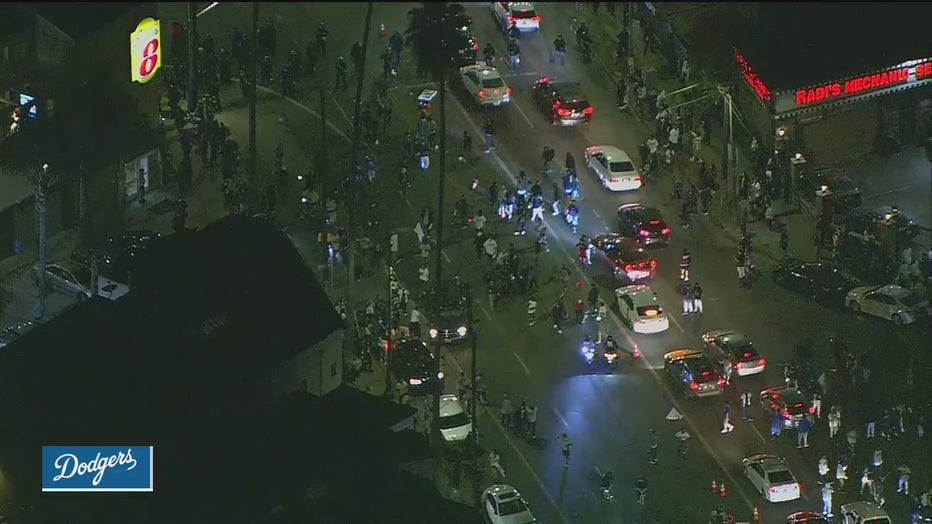 Fans in vehicles in downtown Los Angeles and Pacoima did donuts, causing smoke from the tires to fill the streets.

There were no immediate reports of damage or arrests.

"Everything is nice and peaceful," an LAPD officer said about 9:15 p.m.

The Los Angeles Police Department is under a citywide tactical alert as a precaution during celebrations of the Dodgers' championship, according to Officer Luis Garcia.

Streets around Dodger Stadium were closed to traffic, as police assisted vehicles getting out of the area after the game, according to the Los Angeles Police Department.

People were urged to avoid the area and residents to have identification in order to be allowed through the area.

The LAPD urged fans to celebrate at home.

"I know you want to celebrate like everybody else, but let's do it properly, let's do it the way the Dodgers did, with pride in themselves and pride in our great city. Let's show the rest of the country that we know how to celebrate the proper way," retired Dodger broadcaster Vin Scully said in a video played on the LAPD's Twitter account.

LAPD Chief Michel Moore tweeted his congratulations to the Dodgers for"a hard-fought .World Series victory," then added, "Now let's all make them proud by celebrating with class and style."