A woman and a 2-year-old boy were fatally hit by an SUV while walking home from school in Riverside. The woman, 53-year-old Eligia Morales, is being hailed as a hero for throwing the young boy's 6-year-old sister out of harm's way.

RIVERSIDE, Calif. - A sobbing man clutches his 6-year-old daughter tightly as if he’s afraid he might lose her. He almost did.

The Liberty Elementary student was on the crosswalk with her 2-year-old brother Julian and 53-year-old Eligia Morales, who had just picked her up from school, as usual.

They were almost across the street when a large SUV made a left turn, coming right at them. According to witnesses, Morales threw the girl out of the way and tried to do the same with the boy but it was too late. The vehicle had already struck Julian and hit the woman right after.

She had saved the little girl, but both Morales and Julian died on the street. 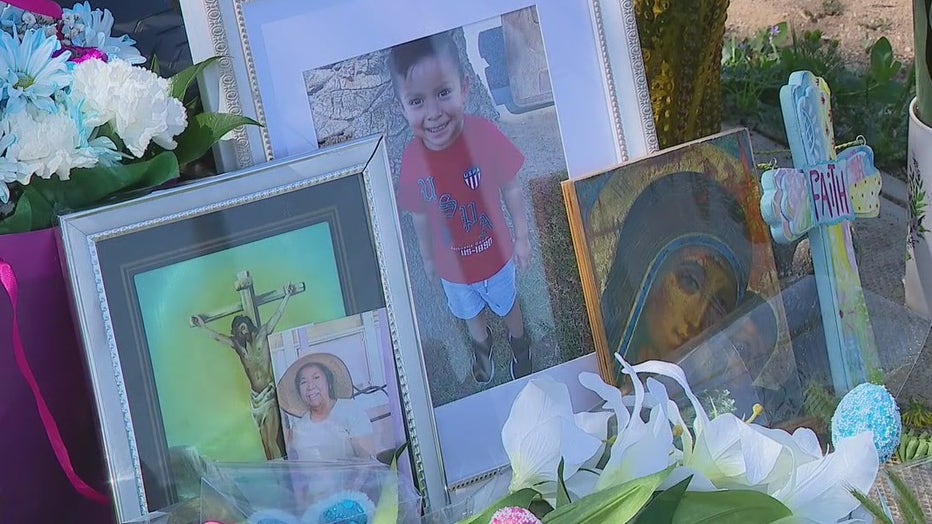 Witnesses say the 46-year-old woman driving the SUV didn’t seem to realize she hit people, when she stopped up the street.

Investigators with Riverside’s Traffic Bureau do not initially believe that alcohol or drugs were a factor, but are still trying to piece together what happened.

There was a child in the SUV, but neither he nor the woman were injured.

Morales is actually related to the children and was babysitting for their parents who work full time. The father, between sobs, tells us she was a great care taker and that he can’t understand what happened.

The shock is as visible on his face, as on the residents at the homes around the intersection, who say traffic is dangerous when students are arriving and leaving campus.

There is a crossing guard there every day, and fatefully, had just left the spot, at the usual time – not earlier than usual.

Riverside Unified School District officials say they have no record of complaints about the corner, and neither does Riverside PD’s Traffic Division.

Records indicate that in the last six years, they’ve responded to one accident at the intersection. Neither that incident, nor five others in the nearby area, have involved pedestrians.

While they investigate what happened, more and more flowers and candles are left on the sidewalk.

"People need to pay attention," says her nephew, who explains she spent her life always taking care of others.

It was the last thing she did, before she lost her life, tried to make sure the children were OK. As one neighbor put it.