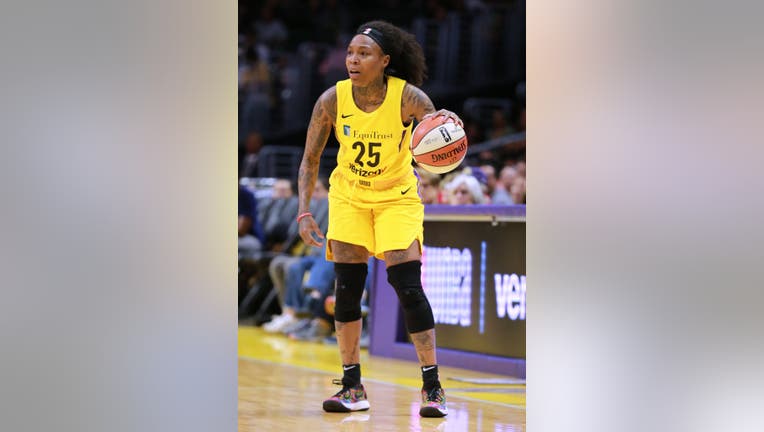 LOS ANGELES, CA - MAY 27: Cappie Pondexter #25 of the Los Angeles Sparks handles the ball against the Phoenix Mercury during a WNBA basketball game at Staples Center on May 27, 2018 in Los Angeles, California. (Photo by Leon Bennett/Getty Images) (Getty Images)

LOS ANGELES - A woman who refused to give her name to police when she was arrested in Los Angeles is said to be WNBA legend Cappie Pondexter, TMZ reported Thursday.

The Los Angeles Police Department told FOX 11 that "Jane Doe" was arrested sometime this past Tuesday on a misdemeanor battery charge. She refused to identify herself to police, so she was booked as "Jane Doe" and was held in jail until she was released earlier Thursday.

Details of the alleged battery incident were not immediately available.

While the LAPD would not confirm to FOX 11 that Pondexter was "Jane Doe," TMZ cites "multiple law enforcement officials."

Pondexter, a two-time WNBA champ, was thought to have been missing after she hadn't been heard from since Monday.

WNBPA, the union for WNBA players, Tweeted earlier Thursday "We are sharing this out of concern for our fellow WNBPA sister, Cappie Pondexter. If you have any information, please contact authorities. Please help us spread the word and ensure that she is safe.
Thank you."