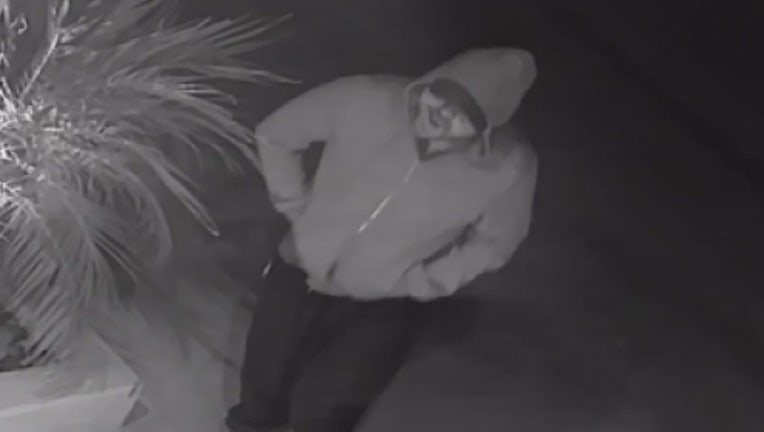 SHERMAN OAKS, Calif. - A Sherman Oaks homeowner is criticizing LAPD after he says his home surveillance video shows police letting the burglar who broke into his home escape right in front of a responding officer.

VIDEO: Sherman Oaks burglar gets away from LAPD; homeowner frustrated

A Sherman Oaks homeowner is criticizing LAPD after he says his home surveillance video shows police letting the burglar who broke into his home escape right in front of a responding officer.

The homeowner asked not to be identified, but said the burglary happened Wednesday night.

Surveillance video shows a hooded man ringing his doorbell to see if anyone is home, then returning a short time later.

He jumps a fence, and begins trying to pry open a side door.

The homeowner’s nanny hears the commotion, and calls him, telling him someone is trying to get in the house.

The homeowner rushes home from work just minutes away, and calls police on the way.

“As soon as I pulled up to the house, my ring camera in the backyard went off, and when I checked that, I did see him walking towards the side door,” he said. “The cops told me don’t go inside, he might have a weapon.”

The suspect goes into his son's bedroom sees him sleeping and leaves. All of this while the homes alarm system is going off. The homeowner drives up behind the suspect's car outside telling police what the man looks like and what he's driving. And he sees a responding police cruiser coming up the street.

The homeowner said, "within two seconds after I saw the cops pulling up, this guy came running out from my driveway and got into his car, at that point I reversed and went right behind him."

As the burglar comes running out of the house it looks like he's fallen right into the LAPD’s lap.

'They pulled up next to him for some reason and the guy just got in his car, and took off."

The burglar puts the pedal to the metal and peels away from the scene with the homeowner in pursuit behind him.

Meanwhile, LAPD had to make a U-turn and try to catch up to the suspect.

Police never caught him and the burglar ended up getting away leaving the homeowner and his family feeling violated.

"I wanted to kill him, if I had a gun on me, which obviously I didn’t, I’d come in and shoot him, I wouldn’t even waste a second", the homeowner said.

FOX 11 reached out to LAPD repeatedly regarding this case, but they haven't responded.

The homeowner tells FOX 11 the suspect's car had paper plates from a nearby dealership.

FOX 11 showed the video to multiple LAPD sources to get their thoughts. They said not to judge the officers reaction just based off the video. They said as far as the officers knew they were only responding to an attempted break-in call.