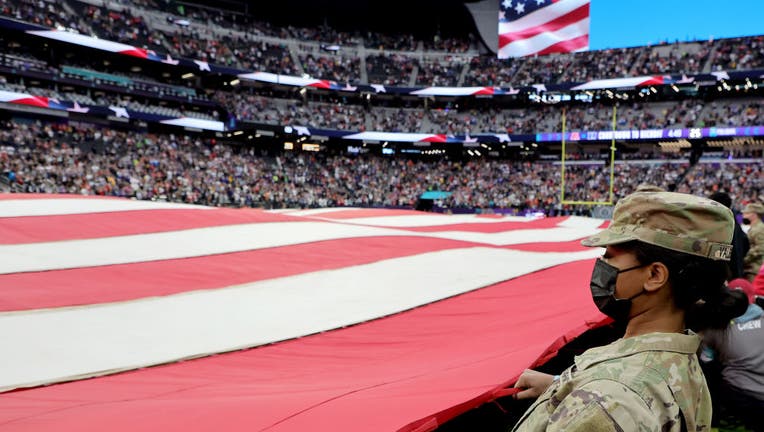 FILE - The American Flag is held on the field as the American national anthem is performed before the 2022 NFL Pro Bowl at Allegiant Stadium on Feb. 6, 2022 in Las Vegas, Nevada. (Photo by Ethan Miller/Getty Images)

WASHINGTON - On March 3, 1931, "The Star-Spangled Banner" was officially adopted as the U.S. national anthem. In recognition, National Anthem Day is celebrated each year in honor of the patriotic song that celebrates America's triumph and endurance.

The song was originally a poem, penned by Francis Scott Key in 1814 with a different title.

Here is a history of the U.S. national anthem and some lesser-known facts.

Who was Francis Scott Key?

Francis Scott Key penned his poem during a naval attack on Fort McHenry in Baltimore, on the Chesapeake Bay, by British ships during the war of 1812.

The Maryland-born attorney had been helping to negotiate the release of an American civilian who was captured in an earlier battle. As a condition of the release, the British ordered the Americans not to return to shore during the attack on Baltimore, according to History.com.

As a result, Key watched the battle unfold in the pouring rain — and eventually, he was able to determine that the Fort’s storm flag had survived the barrage and that by dawn, the larger revile flag was proudly raised.

"He had witnessed Britain’s 25-hour bombardment of the Fort, and for Key, the raising of the American flag was a triumphant symbol of bravery and perseverance," the National Parks Service writes.

The image inspired Key to write a poem.

What ‘The Star-Spangled Banner’ was originally titled

The poem was originally titled "The Defense of Fort M’Henry" and Key put the words to a familiar drinking song at the time, "To Anacreon in Heaven," written by British composer John Stafford Smith, according to the Kennedy Center.

While only the first stanza of the poem is sung, it has four verses in total:

O say can you see by the dawn’s early light,
What so proudly we hailed at the twilight’s last gleaming,
Whose broad stripes and bright stars through the perilous fight,
O’er the ramparts we watched, were so gallantly streaming?
And the rockets’ red glare, the bombs bursting in air,
Gave proof through the night that our flag was still there;
O say does that star-spangled banner yet wave,
O’er the land of the free and the home of the brave?

On the shore dimly seen through the mists of the deep,
Where the foe’s haughty host in dread silence reposes,
What is that which the breeze, o’er the towering steep,
As it fitfully blows, half conceals, half discloses?
Now it catches the gleam of the morning’s first beam,
In full glory reflected now shines in the stream:
‘Tis the star-spangled banner, O! long may it wave
O’er the land of the free and the home of the brave.

And where is that band who so vauntingly swore
That the havoc of war and the battle’s confusion,
A home and a country, should leave us no more?
Their blood has washed out their foul footsteps’ pollution.
No refuge could save the hireling and slave
From the terror of flight, or the gloom of the grave:
And the star-spangled banner in triumph doth wave,
O’er the land of the free and the home of the brave.

O thus be it ever, when freemen shall stand
Between their loved homes and the war’s desolation.
Blest with vict’ry and peace, may the Heav’n rescued land
Praise the Power that hath made and preserved us a nation!
Then conquer we must, when our cause it is just,
And this be our motto: "In God is our trust."
And the star-spangled banner in triumph shall wave
O’er the land of the free and the home of the brave!

How Key’s poem became the official US national anthem

Key’s poem soon became popular, as it was printed under the title of "Defence of Fort McHenry" in newspapers throughout the country, according to the Kennedy Center.

Eventually, the title became "The Star-Spangled Banner" — a name that stuck.

The song remained popular throughout the 1800s. In 1916, President Woodrow Wilson declared that the song be played at all appropriate military ceremonies, the Farmer’s Almanac states.

The periodical reports that the first sporting event it was played at was during the 7th inning of game 1 of the 1918 World Series between the Boston Red Sox and the Chicago Cubs.

Eventually, Congress passed a bill to make the song the country’s national anthem. On March 3, 1931, President Herbert Hoover signed it into law.

Thousands of football fans in Kansas City pitched in to help R&B singer Ashanti belt out the national anthem after technical issues rendered her inaudible ahead of the Cincinnati Bengals versus Kansas City Chiefs AFC Championship on Jan. 30. (Credit: @KChiver via Storyful)

From Super Bowl performances to college graduations, "The Star-Spangled Banner" has made its way into patriotic celebrations across the U.S. ever since.