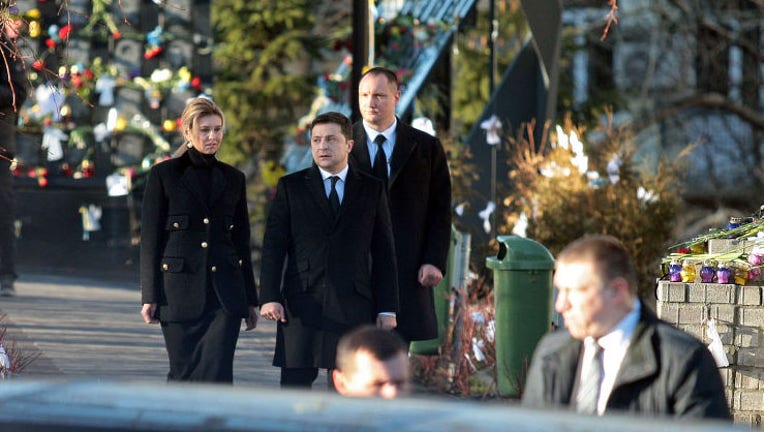 KYIV, Ukraine - The first lady of Ukraine, Olena Zelenska, said she hasn’t seen her husband President Volodymyr Zelenskyy in over a month due to the danger presented by Russia’s war on the country.

Zelenska, who shares two children with the Ukrainian president, told CNN in an interview published on Wednesday that the family has had to separate since the Russian invasion, which first occurred on Feb. 24.

"Volodymyr and his team actually live in the President's office," Zelenska told the news outlet. "Due to the danger, my children and I were forbidden to stay there. So, for more than a month we communicate only by phone."

Both have stayed in Ukraine since the war began, with Zelenskyy having turned down an American offer to evacuate — saying, "The fight is here; I need ammunition, not a ride."

In a "60 Minutes" interview that was broadcast on April 9, Zelenskyy said he and his staff had been at the command center in Ukraine's capital of Kyiv since the start of the invasion.

"When everyone is telling you, you need to go, you need to think. Before I do something, I analyze the situation," Zelenskyy told the outlet, according to an English translation. "I've always done it calmly, without any chaos. I might not be the strongest warrior. But I'm not willing to betray anyone."

The Ukrainian president added that his wife and children "understood" and "fully supported" his decision to stay.

And the decision to stay may have helped prevent an immediate collapse. When Russia invaded Ukraine, it aimed to take Kyiv, topple the government and install a Moscow-friendly regime, according to Western officials. But in the six weeks since, Russia’s ground advance stalled, its forces lost potentially thousands of fighters, and the military stands accused of killing civilians and other atrocities.

In recent days, Russian troops have shifted the focus to the eastern Donbas region, where Ukraine said it was investigating a claim that a poisonous substance had been dropped on its troops. It was not clear what the substance might be, but Western officials warned that any use of chemical weapons by Russia would be a serious escalation of the already devastating war.

Zelenskyy has spent weeks seeking help from Western countries, including the request for more artillery and helicopters to bolster its defenses. On Wednesday, President Joe Biden approved $800 million in assistance for the country, which he said included artillery systems, artillery rounds, and armored personnel carriers, as well as helicopters.

"This new package of assistance will contain many of the highly effective weapons systems we have already provided and new capabilities tailored to the wider assault we expect Russia to launch in eastern Ukraine," Biden said in a statement.

Pentagon spokesman John Kirby provided an update on the situation in Ukraine as Russian forces have stormed the city of Mariupol, killing at least 10,000 civilians, according to the city's mayor. Kirby would not confirm the death total numbers but noted the large amount of bombings and Russian forces currently on the ground in that region.

Biden said the U.S. will continue to work with allies to share additional weapons and resources as the conflict continues.

"The steady supply of weapons the United States and its Allies and partners have provided to Ukraine has been critical in sustaining its fight against the Russian invasion," Biden said. "It has helped ensure that (Russia President Vladimir) Putin failed in his initial war aims to conquer and control Ukraine. We cannot rest now."

RELATED: Russia has yet to slow Western countries' pouring of weapons into Ukraine