Two dead, others hurt during collision in North Hollywood

NORTH HOLLYWOOD, Calif. - Two people were killed, four others injured during a crash triggered by a speeding motorist in North Hollywood.

Witnesses say the driver of a Saturn ION was speeding south on Vineland, just north of Oxnard, when they lost control and hit the curb. The crash created a domino like effect as the vehicle then crashed into two other vehicles.

According to officials, a man who had just walked out of the Vineland Wine Cellar liquor store was struck and killed.

The pedestrian was pronounced dead at the scene, said Officer William Cooper of the LAPD's Media Relations Section. He was later identified as Edgar Kocharya, 36, of North Hollywood, according to the Los Angeles County coroner's office. 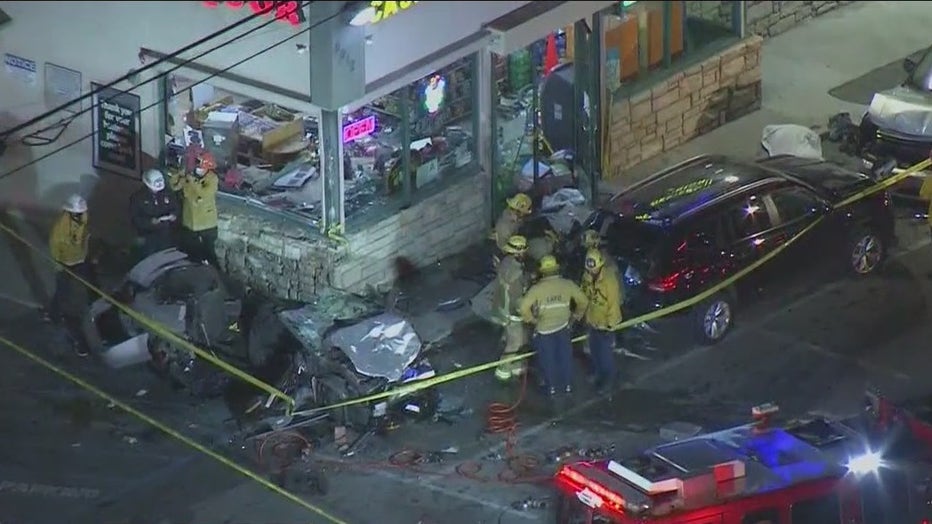 "It was horrible" said one witness who had just walked out of the liquor store. People in a laundromat next to the liquor store ran out to help two young men and one woman in the vehicle that was so badly mangled, it took the fire department extrication equipment to get them out.

Those three were freed from the vehicle and taken to trauma centers, two others declined treatment after being evaluated at the scene.

A woman who was a passenger in the car was later pronounced dead at an area trauma center, Cooper said. Her name will be released pending notification of next of kin, according to the coroner's office.

The conditions of the other two passengers were not known and it was unclear whether the driver was cited or arrested, Cooper said.

People who live in the area say speeding is a constant problem on this section of Vineland, where lights are a good half mile away from one another.

LAPD Valley Traffic Division detectives urged anyone with information about the crash to call them at 818-644-8114.