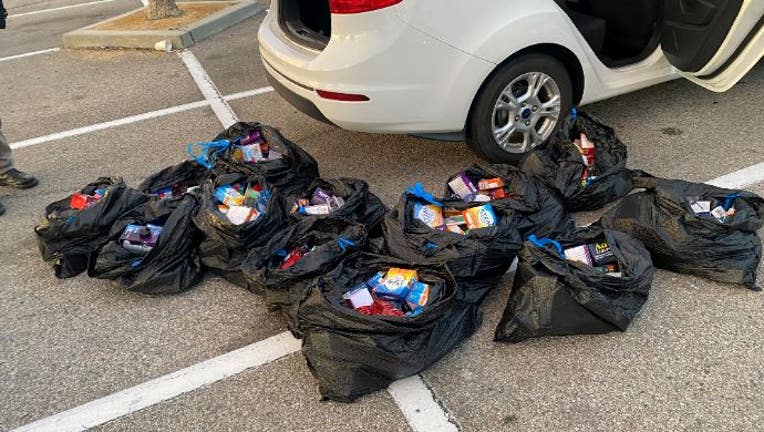 SAN BERNARDINO COUNTY, Calif. - Three people were arrested after stealing $8,000 worth of cosmetics and over-the-counter drugs from multiple stores in San Bernardino County.

Just before 5 p.m. Tuesday, deputies from the Apple Valley Police Department responded to a Walgreens store on the 12000 block of Apple Valley Road after receiving reports of people stealing trash bags full of products.

Once deputies were on the scene, they say a witness was able to help them with a description of the suspects, their vehicle and license plate number.

While officials were investigated the scene at Walgreens, additional thefts were reported at Rite Aid and Target in Apple Valley.

Police say the three suspects involved in the Walgreens robbery were also involved in robberies at two Rite Aid stores and a Target.

Deputies, along with help from Sheriff's Aviation and California Highway Patrol, located the suspect’s vehicle on the 215 freeway. During a search of their car, deputies located 13 black trash bags filled with over-the-counter medication and cosmetics. They also recovered approximately $8,000 in merchandise.

The three suspects were arrested. They have bee identified as 20-year-old Trejour Heard, 19-year-old Shardai Williams, and 18-year-old Zaniya Townsend. All three women are from Los Angeles.

Anyone with additional information is urged to contact Deputy Loup, Deputy Ramires, or Deputy Guzman at the Apple Valley Police Department at (760) 240-7400 or Sheriff’s Dispatch at (760) 956-5001.