In a dangerous TikTok stunt gone viral, a Tesla flies 50 feet over one of the steepest streets in the US and smashes into a couple of cars and trash cans. The driver hasn't been arrested yet and neighbors ae concerned, they say this isn't the first time Baxter street has been used for stunts like this.

LOS ANGELES - In a dangerous TikTok stunt gone viral, a Tesla flies 50 feet over one of the steepest streets in the US and smashes into a couple of cars and trash cans.

Several people and a cat were inside the Tesla.

"It sounded like an airplane crash and I thought maybe somebody crashed into the hill… something crazy you know," Maude said.

With a beautiful view of the Hollywood sign, Echo Park’s Baxter Street has a 32% incline.

The cops know it well, because in the academy, that's where they train; every once in a while, they respond to something like this.

In 2018, a van attempted a similar stunt. The Department of Transportation has since made the road one-way. It's too steep for speed bumps.

But the Baxter Street antics date back more than 100 years, with car manufacturers staging elaborate stunts to show off their vehicles’ horsepower.

The video shows the Tesla take flight on Baxter Street, known for being one of the steepest roadways in Los Angeles, before landing on two cars below on Alvarado St.

Southern California Edison has a photo from 1916 showing a Dodge pick-up with more than 4,000 pounds of hay slowly trucking its way up the monstrous hill. 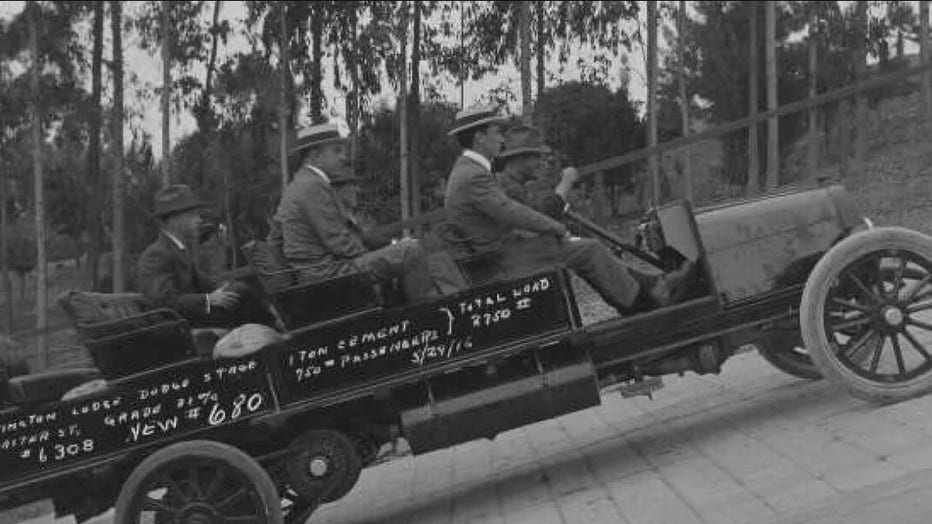 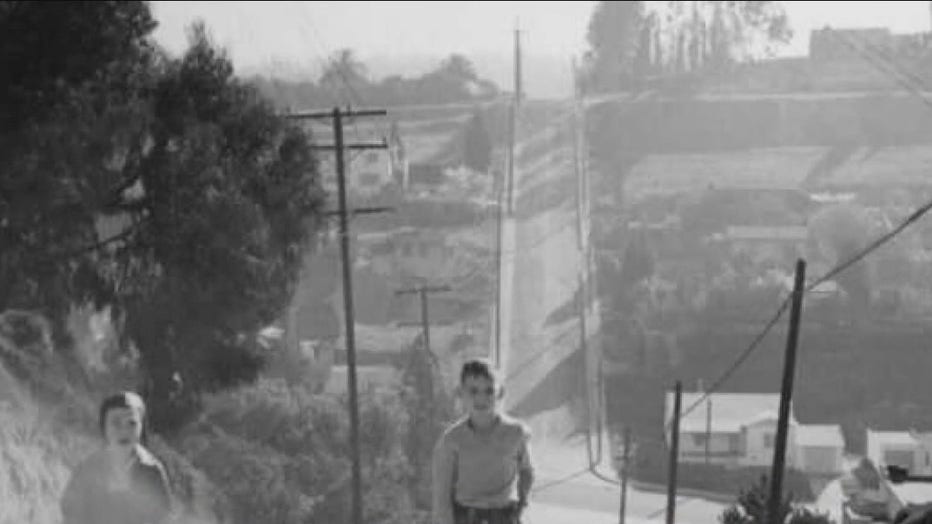 LAPD doesn’t think the driver of Sunday’s escapade is the same person who rented the fancy car.

"I heard the guy’s on the run but completely worth it… nobody got hurt," said local filmmaker Dwayne Coote.

Everyone’s okay including the cat, but residents are livid.

"Had they went that way it would’ve been a lot different…he would’ve flipped over," said Maude.

Instead, it annihilated trash cans and a musician’s Subaru. He just put in a new motor and now it won’t start.

Leads to a person of interest who brags that THC gummies helped him pull off this stunt have since hit a dead-end.

Tesla and Enterprise are cooperating with LAPD but detectives say if and when the driver is caught, he or she will be charged with a misdemeanor hit-and-run so it’s not on the top of the priority list, although it could’ve been much worse.

Los Angeles’ Hit and Run Reward Program Trust Fund awards up to $1,000 to any member of the public who provides information that may lead to the arrest, identification, conviction of a suspect in a crime.