A wild stunt and viral video are now part of a police investigation.

LOS ANGELES - A car stunt gone wrong in Echo Park has the Los Angeles Police Department offering a reward for the driver in the video now seen by millions.

A video of the incident surfaced Sunday morning that shows the Model S Tesla speeding uphill, launching in the air at the crest then landing on the other side of the street. The electric vehicle travels in the air at least 50 feet for roughly a second before hitting the ground bumper first — hitting two parked cars and several trash cans. 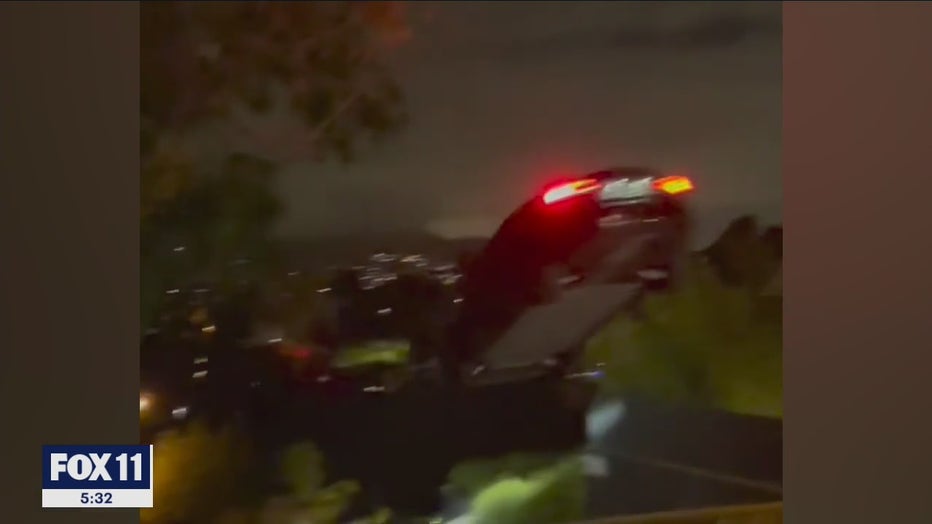 The incident happened Saturday night in the 1900 block of Baxter Street, located near the intersection of Alvardo St. around 12:10 a.m.

"It took out some trash cans and then my blue Subaru back here," said Jordan Hook, who lives on the infamously steep street as well.

Hook had just spent $5,000 repairing his car for an engine issue.

"Then there’s some guy on YouTube getting a bunch of fame and money from the videos and stuff and it leaves a bad taste in your mouth," added Hook.

There are multiple recordings of the Tesla jumping online, including the first upload from a popular car-related YouTuber named Alex Choi.

In the beginning of his video, Choi distances himself from the anonymous driver in warning messages. The YouTuber states he only organized a Tesla meetup Saturday night then later in the evening a random driver said he wanted to show Choi a place where another YouTuber has jumped a Tesla.

A video that has gone viral on social media shows the driver of a Tesla flying into the air.

Choi’s video features multiple angles of the jump including the aftermath where he talks to the driver and the others in the jumped Tesla before they all scatter.

"That car could easily flip over into my house and that’s a scary thought," said Jonathon Sutak with the Tesla headlight still in his front yard.

He along with other neighbors on Baxter Street say the reckless driving has only worsened in the viral video era and they don’t feel safe. Sutak permanently parked an older car of his in an alcove in between his house and the street to protect against accidents.

"It doesn’t feel good to feel that the car could just careen into the house at any moment," added Sutak.

Zsuzsi Paszterko has lived at the corner of the intersection where the Tesla was jumped for 23 years.

"It is really scary because we hear all those cars," said Paszterko. "It’s not a game — it’s a serious issue."

LAPD’s report says the Tesla in the video is a rental.

Los Angeles’ Hit and Run Reward Program Trust Fund awards up to $1,000 to any member of the public who provides information that may lead to the arrest, identification, conviction of a suspect in a crime.