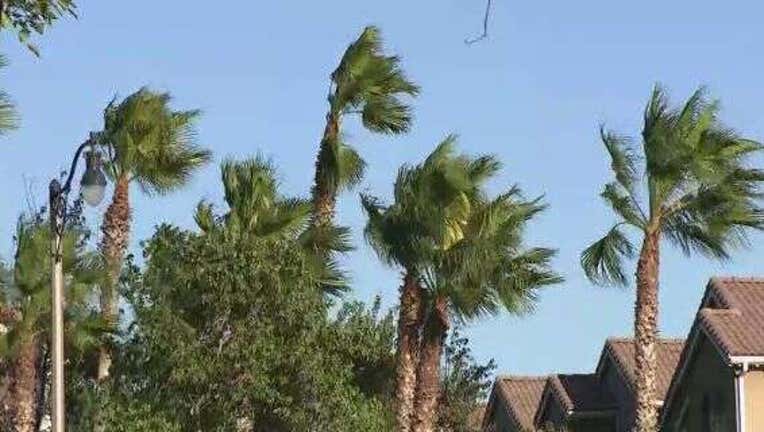 LOS ANGELES - Strong winds will blow in the Southland amid warm temperatures Monday, creating elevated fire weather conditions through this evening and risks of power outages, according to the National Weather Service.

The weather service forecast gusts of 20-35 miles per hour along the coasts and in Southland valleys and of 35-50 mph in the mountains. But as of early Monday, the only wind advisory issued was for the Santa Clarita Valley and portions of San Luis Obispo and Ventura counties. It will be in effect until 2 p.m.

"Gusty winds will blow around unsecured objects and make driving difficult, especially for high-profile vehicles,'' warned the NWS. "Tree limbs could be blown down and a few power outages may result."

The weather service said some freeways will be affected by strong winds, including the 14, 118 and 126.

The NWS also urged residents to avoid sparking a fire by not burning trash outdoors or parking vehicles on dry grass.

In Orange County, a beach hazards statement, which is slightly less serious than a high surf advisory, will be in effect through Tuesday morning amid warnings of minor coastal flooding coinciding with high tides, with seas of 6.9 feet forecast in Newport Beach at 9:02 a.m. today and 6.6 feet at 9:44 a.m. Tuesday. No coastal warnings were immediately issued for L.A. County but beach hazards statements were in effect in San Luis Obispo and Santa Barbara counties.

Off the coast, hazardous wind and sea conditions are expected, prompting the NWS to issue a small craft advisory that will be in effect from midnight to 3 p.m. Tuesday, when inexperienced sailors are urged to remain out of the water, especially in small vessels.

Sunny skies and warm temperatures were forecast Monday in L.A. County, where highs will reach 72 degrees on Mount Wilson; 75 in Palmdale and Lancaster; 79 in Avalon; 85 at LAX; 86 in Saugus; 87 in Burbank; 88 in Long Beach; 88 in San Gabriel; 89 in Pasadena; and 91 in Woodland Hills and Downtown L.A. Tuesday's highs will be sharply lower in some communities. Downtown L.A., for example, will be 15 degrees lower. l.A. county temperatures will remain in the high 60s and low 70s through at least Sunday.