U.S. Transportation Secretary Pete Buttigieg said the department is investigating the wave of cancelations and delays that have left thousands of Southwest Airlines passengers stranded.

LOS ANGELES - Southwest Airlines has issued an apology for operational challenges causing long delays at Los Angeles International Airport and other airports nationwide in the days after Christmas due to an intense winter storm, promising it is working to recover.

"With consecutive days of extreme winter weather across our network behind us, continuing challenges are impacting our customers and employees in a significant way that is unacceptable," Southwest said in a news release Monday. "We are working with safety at the forefront to urgently address wide-scale disruption by re-balancing the airline and repositioning crews and our fleet, ultimately to best serve all who plan to travel with us. And our heartfelt apologies for this are just beginning."

Southwest canceled more than 2,900 flights Monday, more than 70% of its scheduled total, according to the tracking website FlightAware.

All flights were listed as unavailable until Dec. 31.

One of the travelers stranded at LAX, Doug, told FOX 11 that Southwest has "wiped out any ability to make a reservation until January 1."

SUGGESTED: Flight canceled? Can you get a refund? Here's how to find out if you're owed money

On Southwest Airlines' web page, there are no flights available departing or flying into LAX for various destinations through Dec. 31.

The unhappy traveler told FOX 11's Laura Diaz Monday evening that the earliest the airline could do rebooking was New Year's Eve. 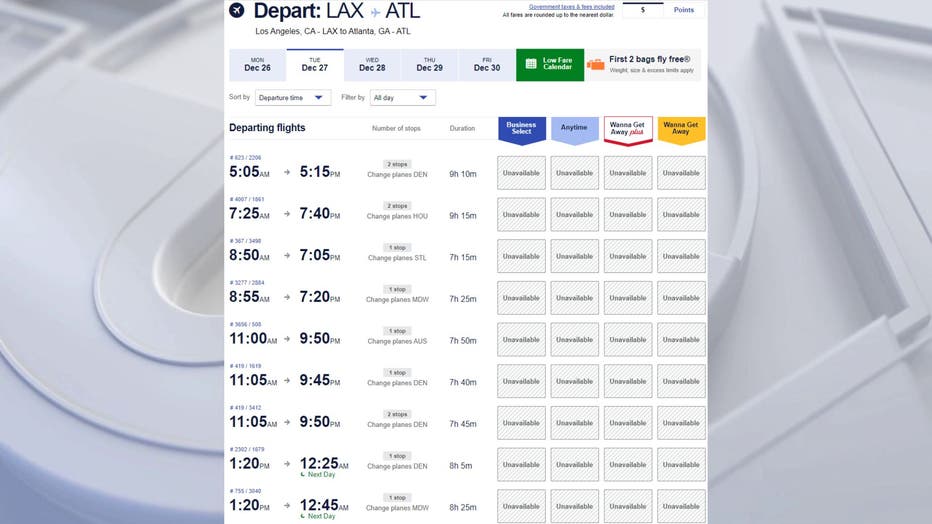 Screenshot taken at 5:30 p.m. PT Monday, December 26 shows all flights out of LAX being unavailable for booking to travelers looking to fly to Atlanta.

Southwest Airlines shares fell Tuesday after the airline canceled thousands of flights over the holiday travel weekend with more expected in the coming days.

As of midday Tuesday, the airline had canceled nearly 2,600 flights nationally, including many from Los Angeles International Airport and other airfields across Southern California, according the tracking website FlightAware.

At LAX, a total of 106 departing flights from all airlines had been canceled as of late Tuesday night, with 28 others delayed.

Some flights were still departing from LAX, John Wayne Airport, Hollywood Burbank Airport and Long Beach Airport, but passengers were being urged to check flight schedules.

As of Tuesday evening, 94 departing flights had been canceled at John Wayne Airport -- including airlines other than Southwest -- as were 43 flights from Burbank and 32 from Long Beach.

At airports across the country, hundreds of bags have been piling up at terminals; with many people saying it took them days to get their luggae. 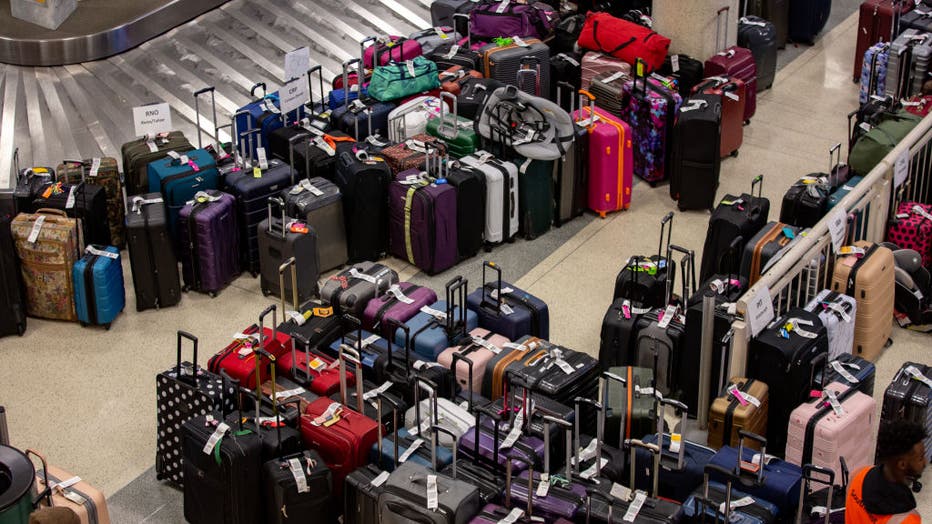 A massive amount of unclaimed luggage is gathered at the Southwest Airlines Baggage Claim at Midway Airport on December 27, 2022 in Chicago, Illinois. (Photo by Jim Vondruska/Getty Images)

The airline said it was fully staffed late last week and prepared for the approaching Christmas weekend when severe weather swept across the continent.

"This forced daily changes to our flight schedule at a volume and magnitude that still has the tools our teams use to recover the airline operating at capacity," Southwest said. "This safety-first work is intentional, ongoing, and necessary to return to normal reliability, one that minimizes last-minute inconveniences."

Southwest admitted anticipating "additional challenges with an already reduced level of flights as we approach the coming New Year's holiday travel period, and we are working to reach out to customers whose travel plans will change with specific information and their available options."

Storm blamed for dozens of deaths as threat continues

At least 48 people have been killed in a massive winter storm.

RELATED: Over 1,600 US flights canceled on day after Christmas

Southwest added its employees and crews "are showing up in every single way. We are beyond grateful for that. Our shared goal is to take care of every single customer with the hospitality and heart for which we are known. On the other side of this, we will work to make things right for those we have let down, including our employees."

Southwest released a statement to FOX 11 saying in part, "On the other side of this, we’ll work to make things right for those we’ve let down, including our Employees. With no concern higher than ultimate Safety, the People of Southwest share a goal to take care of each and every Customer. We recognize falling short and sincerely apologize."

The Department of Transportation expressed concern over the "unacceptable rate of cancelations." The department said it will examine whether cancelations were controllable and if Southwest is complying with its customer service plan.