The outdoor shopping center was packed during Black Friday.

COMMERCE, Calif. - The Christmas tree in the center court of The Citadel Outlet Mall is 100 feet tall. There are 18,000 LED lights. Ten thousand ornaments decorate the huge tree. 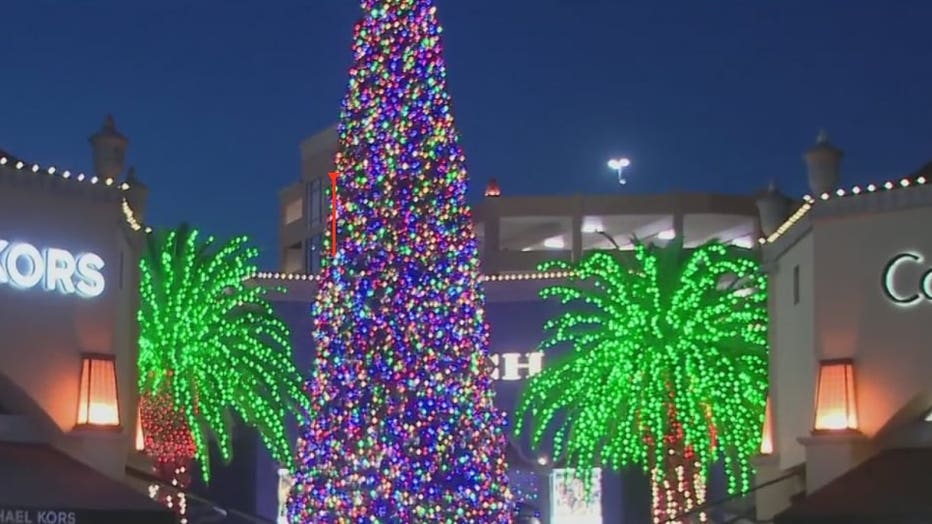 It’s festive, colorful and inviting. And, on the grounds around it are shoppers, shoppers and more shoppers. More customers than the shopping center expected.

Customers like Jerry Mendoza, an Uber driver, came by because he finds Black Friday shopping fun.

But, one thing is clear. Black Friday 2020 is like no other.

Mendoza grabbed bargains for himself. Shopper Oscar Barajas picked up gifts for his family.

Traditionally, that’s what Black Friday is all about. Good deals and holiday shopping!

The signs advertising specials say things like, “50% off on all apparel” or “Footwear... Buy One Get one 70% off!”

But, between the shoes, jackets and other merchandise, there are other signs like “Masks Required, “Hand Sanitizing,” and “Social distancing!”

David Blagg is the general manager of The Citadel. He says, “We have over 40 hand sanitizing stations though out the center.”

We wanted to know if the people in a nearby line were six feet apart and if Blagg was comfortable with some shoppers standing close to one another.

“Well,” he says, “...up until now, I’ve been very comfortable with what I’ve been seeing.”

When we walked closer to the line outside Calvin Klein, his comfort level changed. After a closer look, he thought people were too close together. He made the decision to talk to the managers of that store and another where we observed little social distancing, after which he said, “I went in and talked to the manager of the store and told them that we needed them to control their line to get the distancing right.”

After he saw the managers do that, he felt better.

It wasn’t just what we observed it’s what shoppers have been talking about all day on social media. Though a couple of shoppers inside Timberland told us they felt okay because of the protocols in this store. Shoppers like George Francescon told FOX 11, “I’m not worried about it. I think that all of the protocols are in place.”

It’s true with Timberland and Dockers. Those were the only stores that welcomed the media inside to observe their procedures. We could see their sanitizing efforts. We noticed how they were limiting the numbers of people in their store, But, to shopper Peter Anguiano, “The problem that I have is the lines outside.”

And he wasn’t alone. Jerry Mendoza, who we heard from earlier in this story, said he was uncomfortable “because I’m very afraid of COVID-19.”

To that, The Citadel General Manager David Blagg said, “We’re trying to stay on top of all of that and make sure everyone has a happy, healthy holiday.”