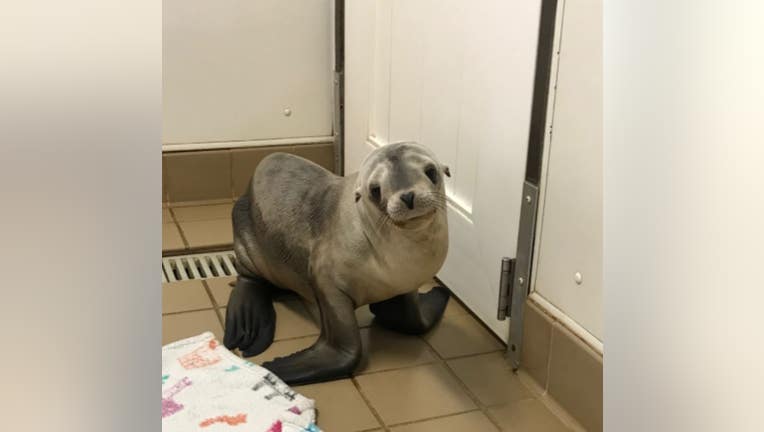 LAGUNA BEACH, Calif. - A 33-pound sea lion pup made a big jump from a footbridge on Aliso Beach to the northbound lanes of Coast Highway in Laguna Beach.

The sea lion climbed up the Aliso Beach pedestrian bridge at Aliso Circle which crosses South Coast Highway Monday night, according to Laguna Beach Police Department Sgt. Jim Cota. The sea lion got to the south wall of the inland side of the bridge where it jumped off after approximately 40 minutes of sitting on the bridge, Cota tweeted.

"As it jumped, a lot of overgrown brush and vines slowed its fall, possibly reducing its injuries,'' Laguna Beach Animal Control Officer John
Thompson, who was at the scene, told The Orange County Register.

Staff from the Pacific Marine Mammal Center and Laguna Beach Animal Services were able to capture the sea lion and take it to the mammal center's facility in Laguna Canyon, Cota said. The sea lion was not injured.

"Despite falling almost two stories, the animal appears not to have any fractures or internal injuries,'' Pacific Marine Mammal Center CEO Peter Chang told The Register.

"The winter conditions combined with his malnourished state could have caused him to seek shelter as far away from the ocean as possible in an attempt to stay warm,'' Chang said.

This is the eighth pup from the Channel Islands rookeries that mammal center has taken in this season.

The sea lion has been named "Lords-a-Leapin'' by the center's staff. Its gender is not known.