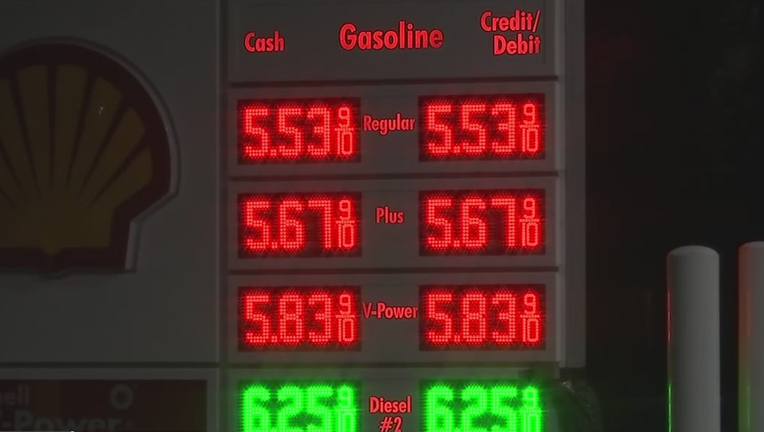 SACRAMENTO, Calif. - California Gov. Gavin Newsom’s proposal to send people another round of government checks, this time to help offset the record high cost of gas, will do more than just win him political points in an election year — it could help him balance the state’s budget.

California had a record surplus last year and while not as large this year the excess could still reach $29 billion. The state constitution limits how much money the Legislature can spend each year through a complex formula based on how much money the state collects in taxes. The state has rarely surpassed the limit in the more than four decades it’s been on the books.

But revenues have been climbing so fast that Newsom expects the state to be at least $2.6 billion past the limit this year and perhaps much more.

Newsom and state lawmakers have a few options to get back under the limit. They can cut taxes, spend more money on things such as infrastructure and public education, or return money to taxpayers. That last option has been the most popular choice. Last year, the state sent $10.9 billion in rebates to taxpayers who met certain income requirements.

Newsom had not proposed any new rebates so far this year. But Tuesday, he included a surprise proposal in his annual State of the State address: A rebate to help people pay for the high cost of fuel. His announcement came just hours after President Joe Biden banned oil imports from Russia in response to that nation’s invasion of Ukraine, a decision that will likely further increase California’s record-setting gas prices.

"There’s news that’s evolving every day on these questions, and we’re trying to keep up and make sure that we can keep up with protecting Californians," said Jason Elliott, Newsom’s senior adviser.

The proposal is so new there aren’t many details. Dee Dee Myers, another Newsom senior adviser, said one idea is to make the rebate available for people who have a car and live in California, regardless of their immigration status. She said the cost "will be in the billions" but it’s unclear how much people would get individually. It’s likely the state’s Democratic legislative leaders will want to focus the rebate so the rich don’t get the same amount as the poor.

It’s also not clear how much the proposal would help keep the state under the spending limit. In general, every $1 above the limit requires $1.60 of response. Newsom has already proposed $19.2 billion in spending on things such as building maintenance, drought response and transportation projects to help get the state under the limit.

The nonpartisan Legislative Analyst’s Office says more action will likely be needed. The agency predicts there is a 90% chance revenues for the current budget year will continue to grow and could exceed expectations by as little as $5 billion or as much as $20 billion.

That means any rebate proposal likely won’t be enough on its own to address the problem. Myers said the Newsom administration is more focused on how the rebate would help drivers instead of how it would help meet the spending limit.

"This would put money directly into the pockets of people," she said.

How to find cheap gas near me

California’s gas tax is 51.1 cents per gallon, the second highest in the nation. It’s scheduled to increase slightly for inflation on July 1. Newsom has proposed pausing that for one year, a move that would save drivers about $1.30 per month, according to Transportation California, a nonpartisan business and labor coalition.

California Republicans have backed a competing proposal that would suspend California’s gas tax for six months. Republican Assemblymember Kevin Kiley, the author of that proposal, said it would be "the quickest and easiest and most meaningful form of relief we could offer."

"There’s no need for any sort of complicated rebate program that’s going to take a lot of time," he said.

Republicans, however, don’t have the numbers in the state Legislature to pass their bill. The top two Democrats in the Legislature — Assembly Speaker Anthony Rendon and Senate President Pro Tempore Toni Atkins — don’t support it, and they also don’t support pausing the gas tax increase, saying "our focus cannot be a small cut to the gas tax that might not get passed on to consumers."

Suspending the gas tax, they say, would take "critical funds away from road repair and improvement." Instead, the leaders indicated they would do something similar to what Newsom proposed by seeking "tax relief from the General Fund."

The average price for a gallon of regular gas in California was a record $5.57 on Wednesday, the highest in the country, according to AAA.

In the small community of Plumas Lake, about 30 miles (48 kilometers) north of Sacramento, regular gas was selling for just under $6 per gallon on Wednesday morning.

"It’s crazy. But, I mean, what am I going to do? I can’t do anything about it," said Viridiana Manriquez, 26, as she filled up her car.

George Thelen, 78, paid $74.65 to fill up his work truck on his way to a job. He said he routinely drives more than 100 miles (161 kilometers) per day for his construction business.

Thelen said he’s raised his prices to compensate for rising fuel costs. But a fix is on the way: He’s ordered an electric car he plans to turn into a work vehicle by removing some of the seats.

Meantime, he said he’s not too worried about customers getting upset with him about raising his prices.

"There’s a labor shortage," he said, pausing to pull his ringing cellphone from his front shirt pocket. "And my phone is ringing off the hook."