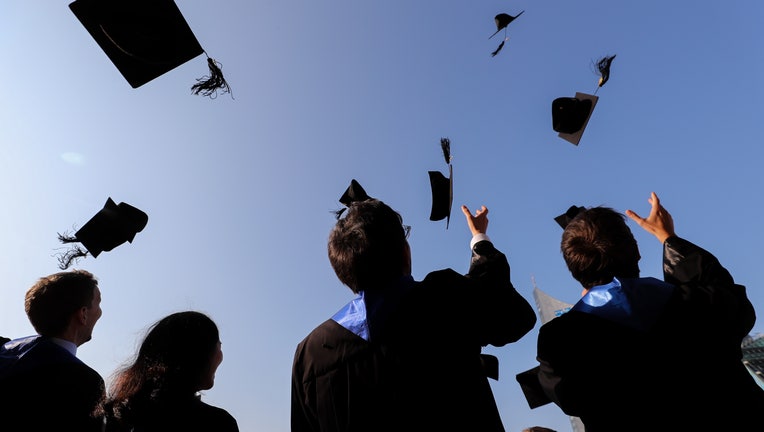 Students are shown tossing their graduation caps in a file photo. (Photo by Jan Woitas/picture alliance via Getty Images)

You know that piece of paper framed on your office wall that cost a great deal to get? Now, that college diploma can get your more than a job offer.

Natural Light, or as it's known across many college campuses "Natty Light," is offering graduates $100 if they are willing to loan their diplomas to the company. Participants must be over the age of 21, and the company assures them their diplomas will be returned "in the exact same condition."

"Participants simply fill out a diploma rental agreement on nattydiplomas.com and the brand will send a pre-paid envelope to mail back the diploma," according to Anheuser-Busch InBev. "They’ll keep it safe. They’ll send it back, they just won’t tell you what it’s for."

There's a limit, the company said. So speed is of the essence in claiming the $100.

The company is being tight-lipped as to why it needs the physical diploma, only saying it's "a part of a highly-classified plan they're brewing up as an extension of the college debt relief program."

"We'll have [the diploma] for about 12 months," Daniel Blake, senior director of U.S. value brands for Anheuser-Busch InBev, told FOX Business' Charles Payne on Tuesday. "We're not disclosing how we're using them quite yet, but what I can tell you is it's going to cause a lot of conversation once we unveil what our plan is."

In 2018, Natural Light launched its college debt relief program. In 2019, the company pledged to raise $10 million over a decade to put toward the college debt epidemic in America.

In contrast, the total student loan debt level in America has skyrocketed to more than $1.5 trillion.

According to a report published at the beginning of February, education loans accounted for just 6.3 percent of America’s total debt in 2010, roughly $760 billion. That surged to 10.7 percent, or a whopping $1.5 trillion, by the end of the decade.

The company hopes to "highlight how big this problem is," according to Blake, calling it "one of the biggest issues facing people today."

Get the latest updates on FoxBusiness.com.