A community is in mourning after a frontline hero was murdered in downtown Los Angeles.

LOS ANGELES - Friends and colleagues gathered Wednesday to remember Sandra Shells, the emergency room nurse who was killed in an unprovoked attack at a Union Station bus stop in downtown Los Angeles.

For 38 years, Shells, known as Sandy, worked at LAC + USC Medical Center and loved what she did.

The morning she was killed, she was starting her everyday routine. She would take the bus to arrive at the hospital around 5:45 a.m. so she could read the Bible before her 7 a.m. shift.

"She greeted us every morning while she read her Bible. You knew it was going to be a good day if you worked with her," co-worker, Bruce Banares, RN told FOX 11.

Friends and colleagues gathered to remember Sandra Shells. She died days after she was attacked by a man experiencing homelessness at a bus stop. 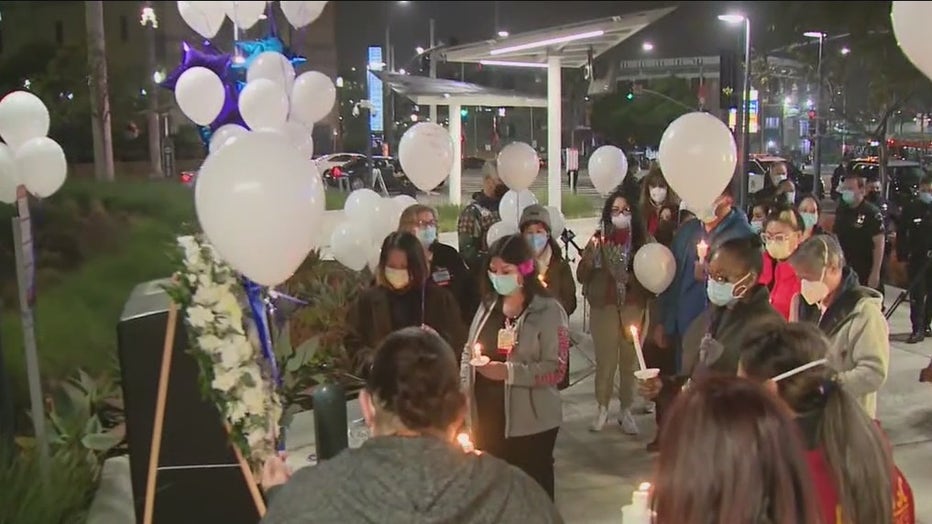 On Jan. 13 around 5 a.m., Shells was at a bus stop on E. Caesar Chavez avenue near N. Vignes Street when suddenly, a man experiencing homelessness punched her so hard, that she fell to the ground and hit her head on the concrete, officials said. The investigation reveals she was attacked for no apparent reason and that she fractured her skull.

Shells was rushed to the hospital where she worked for nearly four decades. Days later, she died from her injuries sustained in the attack.

The Los Angeles Police Department said Kerry Bell, 48, was taken into custody shortly after the brutal incident after conducting a search in the immediate area. He has been charged with murder and a judge set his bail at $2 million.

Loved ones said helping others motivated Shells every day and that she had an affinity for helping those experiencing homelessness. In fact, she often carried extra clothes with her to give away.

"She taught me benevolence and unbiased care. What she stood for was the homeless, was the underserved. She liked this community and was very dedicated," Banares stated.

The 70-year-old nurse often mentored her peers, who often joked they would retire before her.

"What she taught me is ‘you’re a nurse.’ Not the skills you learn in school, but what it means to be a nurse. No matter what you’re going through, no matter who cussed me out, I’m still your nurse. ‘How can I help you?’" he added.

"Sandy will be missed. Her spirit is missed. It’s hard to work in the area without her in the ER. She never stopped working. At her age, at 70, she didn’t take too many breaks. She helped everybody and said ‘What can I do next?’ I was her charge nurse sometimes. It just sucks that this happened, but Sandy represented unbiased care for anyone no matter where you were in life," Banares said.

Her legacy will live on through those she mentored and worked with through the decades. Her colleagues are aiming to set up a scholarship in her name in the spirit of helping those in need.