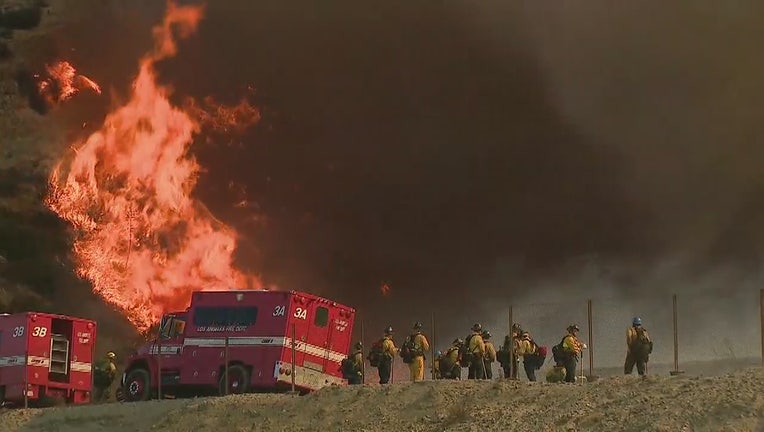 The Red Flag Warning was initially set to expire on Friday afternoon. However, forecasters predict high winds speeds will remain in the forecast for at least an additional 26 hours.

Multiple fires ignited across Southern California as Santa Ana winds roared through the region. The Saddleridge Fire burning in the Sylmar area reached nearly 6000 acres Friday and one person died after going into cardiac arrest attempting to fight the flames at his home, officials said.

The strong winds also sparked multiple fires in the Inland Empire, including the that tore through a mobile home park community.

The red flag warning issued by the National Weather Service went into effect at 3 a.m. Thursday and indicated critical fire weather conditions were in effect in the Santa Monica Mountain Recreational Area, the San Gabriel Mountains, the Angeles National Forest, the San Fernando, San Gabriel and Santa Clarita valleys, Los Angeles, including the coast, metropolitan L.A., Downtown L.A. and the Hollywood Hills, and much of Ventura county.

At 8 a.m. in the city of Los Angeles, Red Flag parking restrictions mandated by the Los Angeles Fire Department went into effect for 24 hours "or until further notice'' in areas of the city that have been posted as being within the "Very High Fire Hazard Severity Zones.'' 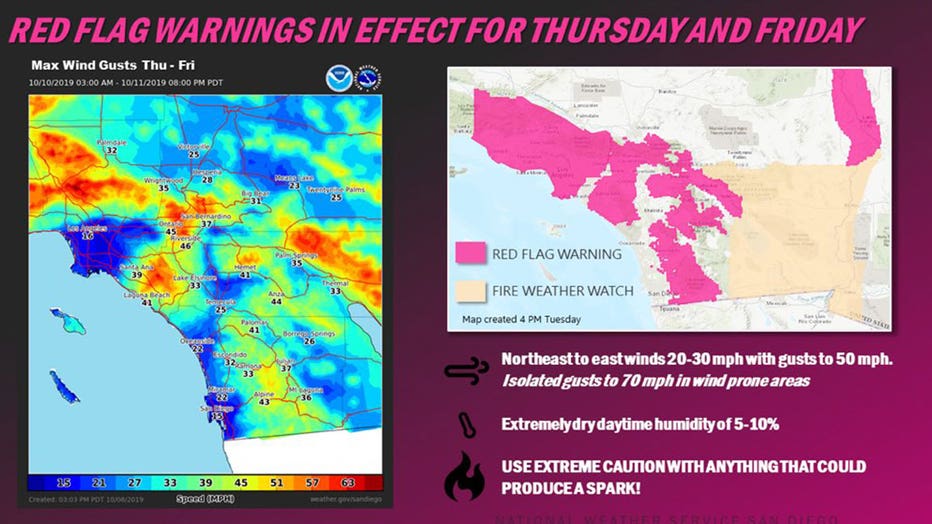 The program is designed to remove parked vehicles from areas such as those with very narrow roads, hairpin turns, tight curves, and key intersections that, if not cleared of vehicles, would create a "choke point'' for emergency vehicles, according to the LAFD.

The strongest winds were expected from mid-morning to mid-afternoon Thursday, and again Friday morning, amid humidity levels of 3-10 percent and very dry vegetation providing an abundance of potential wildfire fuel, the NWS reported.

During a red flag warning, residents are advised to be extremely careful with open flames.

"If fire ignition occurs, conditions will be favorable for extreme fire behavior, which would threaten life and property,'' the NWS warned.

Also in force Thursday -- until 6 p.m. Friday -- is a red flag warning in inland Orange County, including the Santa Ana mountains, with forecasters warning of east-to-northeast winds of 20 to 35 mph, gusting to 50 mph, with isolated 70-mph gusts in mountain areas.

These alerts could be extended if atmospheric conditions hold up. FOX 11 will be closely monitoring the possibility of the addition of wind advisories, high wind watch/warnings, and red flag alerts in our area.

The Los Angeles County Fire Department and the California Governor's Office of Emergency Services have pre-positioned additional firefighters and equipment in areas identified as having elevated risk of wind-driven wildfires.

Residents are reminded that 90% of wildfires are caused by human activity and are asked to call 9-1-1 at the first sign of smoke or fire, the L.A. County fire Department said in a statement. It invited residents to consult its website at www.fire.lacounty.gov for steps on how to prepare and safely evacuate well ahead of a wildfire.

Southern California Edison, meanwhile, cautioned that thousands of customers throughout its service area could lose power due to "Public Safety Power Shutoffs'' aimed at reducing fire risks. The shutoffs are conducted during extreme fire conditions -- de-energizing power lines that might be damaged in high winds and spark wildfires. Nearly 174,000 customers are in areas that are "under consideration'' for power cuts.

In Los Angeles County, there are roughly 49,000 customers facing possible cuts, primarily in the northern reaches of the county such as Lancaster, Palmdale, Santa Clarita and areas such as Acton, Agua Dulce, Lake Hughes and Canyon Country. La Crescenta/Montrose, Malibu, Chatsworth and San Fernando are also in the potentially affected area.

In Orange County, about 7,250 customers in Rancho Santa Margarita, Orange and North Tustin are in potential power-cut areas.

Malibu officials said earlier this week that SCE had given the city a 48-hour notice that a Public Safety Power Shutoff may be implemented that could affect Western Malibu beginning at 9 p.m. Thursday and continuing until 9 a.m. Friday. The city urged people who are medically dependent on electricity service to consider staying in another area until conditions change.

Edison urged residents to check on family members and neighbors who may need assistance in case of a power outage. If a PSPS is implemented, once hazardous conditions have passed it could take 24 to 72 hours to re-energize circuits because SCE must first inspect all power lines in the affected area to ensure they are safe to re-energize.

SCE and PG&E have detailed information and maps for those living in affected areas.

Along with the red flag warning, a high wind warning was in effect until 3 p.m. Friday.

"Damaging winds may blow down trees and power lines. Widespread power outages are possible. Travel will be difficult, especially for high profile vehicles,'' the NWS warned. "Use extra caution when driving, especially if operating a high-profile vehicle. Secure outdoor objects.''

Additionally, "people should avoid being outside in forested areas and around trees and branches. If possible, remain in the lower levels of your home during the windstorm, and avoid windows. Use caution if you must drive.''

In the Antelope Valley, a freeze watch was in force from late Thursday through Friday morning, with temperatures as low as 28 degrees expected.